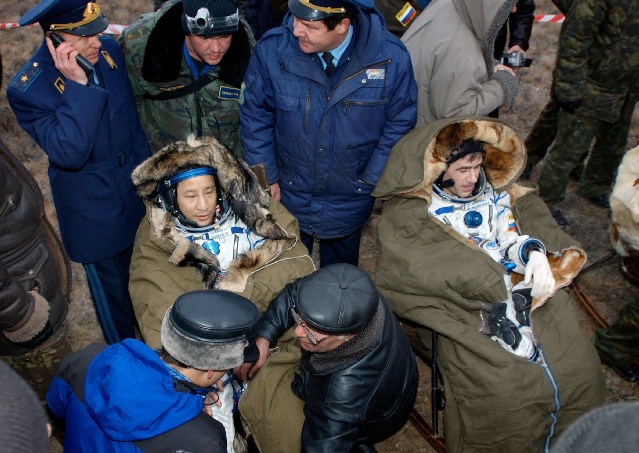 The crew of Expedition 7 returned to Earth after spending six months aboard the International Space Station (ISS) on Oct. 27, 2003 at 9:41 p.m. EDT (0141 GMT).  With the leadership of Yuri Malenchenko of Roscosmos, and US astronaut Edward Lu followed Norman Thagard in traveling to space in a Soyuz spacecraft. The two men experienced a more scaled back expedition due to the sudden loss of space shuttle Columbia on Feb. 1, 2003. During their six month stay onboard the orbiting laboratory, the commander and flight engineer had less experiments to work with, but were visited by two cargo spacecraft filled with supplies. They also celebrated Lu’s birthday and received an unexpected surprise from NASA centers around the country.

Of even more significance is the fact that Yuri Malenchenko – became the first person to ever be married while in space. He and his wife, Ekaterina Dmitrieva tied the knot on Aug. 10, 2003.

Malenchenko and Lu were both crewmates on STS-106 where, on flight day three, they conducted a 6 hour, 14 minutes extra-vehicular activity between the Russian Zarya and Zvezda modules of the ISS. The seventh crew to the space station launched on a Soyuz TMA-2 spacecraft from the Baikonur Cosmodrome, in Kazakhstan Russia at 11:54 p.m. EDT (0354 GMT) on April 26, 2003. The Soyuz docked to the station two days later on April 28. Ed Lu watches a water bubble float between him and the camera, showing his image refracted, on the International Space Station (ISS). Photo Credit: NASA

Prior to this mission, the space shuttle program was halted due to the loss of NASA’s orbiter Columbia earlier in the year. Since the remainder of the fleet was grounded, crews to the station were reduced, down to two astronauts instead of three, which was scheduled to be brought back by a space shuttle. Due to the reduction in the size of the crew, scientific experiments were also scaled back. Only 15 experiments were conducted during the mission. While serving aboard the station, Lu celebrated his 40th birthday. In honor of this event, Hawaiian Governor Linda Lingle declared July 1 to be “Edward Tsang Lu Day” in Hawaii. Hundreds of NASA employees from the White Sands Test Facility located in New Mexico, NASA Headquarters in Washington, D.C., and Johnson Space Center in Houston, Texas all surprised Lu by wearing Hawaiian shirts to honor the flight engineer’s birthday.

On Oct. 15, 2003, Lu and Malenchenko were informed by Mike Fossum, ISS Spacecraft Communicator in Houston, that astronaut Yang Liwei was launched aboard a Shenzhou 5 rocket, becoming the first Chinese “taikonaut” to fly in space. Commander Malenchenko replied, “I would also like to say I love to have somebody else in space instead of me and Ed.” Malenchenko’s sentiment underscored the fact that China had entered a very exclusive club. Before Liwei’s flight – only the United States and Russia had demonstrated the capability of launching crews to orbit on their own.

From launch to landing, Expedition 7 lasted a total of some 184 days, 22 hours, 46 minutes, and 28 seconds. Since that time, the space shuttle has returned to flight, been retired and a new effort was undertaken to deliver cargo and crew to the station via commercial service providers.