Our Spaceflight Heritage: a piggyback ride for Enterprise 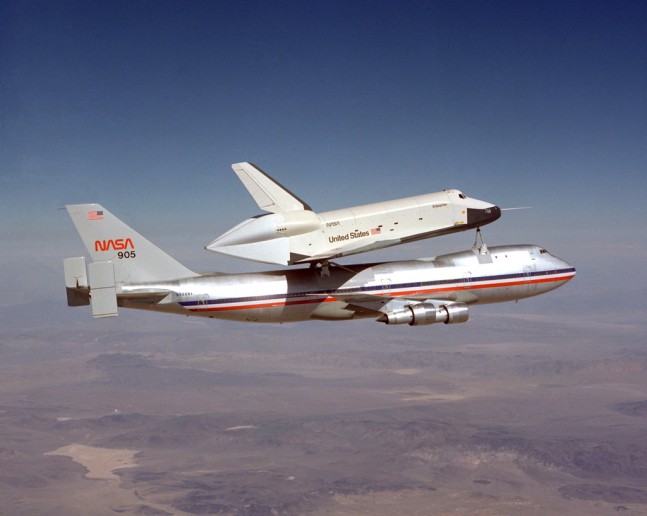 The first of Enterprise's five free flights from the NASA 747 Shuttle Carrier Aircraft at Dryden in 1977. Photo Credit: NASA

On August 12, 1977, Space Shuttle Enterprise made its first glided test flight. During the test, she was piggybacked off a modified Boeing 747 airplane and glided safely to the floor of the Mojave Desert. Enterprise, the first orbiter built for the Space Shuttle Program, was used primarily for ground and flight tests within the atmosphere. A full-scale orbiter prototype, named Enterprise, was built for the Space Shuttle program. Because the vehicle would not be subjected to reentry heating, Enterprise had no need for a thermal protection system. It was not covered with the space shuttle’s reusable surface insulation, but with substitute materials, primarily polyurethane foam and Fiberglas.

The flight deck had two crew stations for the commander and pilot. Aerodynamic controls included a body flap at the aft end, elevons and a split rudder that doubled as a speed brake. Reaction control systems, unnecessary at low altitude, were not installed. For the captive flights and the first three free flights, an aerodynamic fairing covered the orbiter’s aft end. Three dummy main engines were installed for the final two flights to simulate weight and aerodynamic characteristics of an operational orbiter. The initial testing period named Approach and Landing Test (ALT) included a flight on February 18, 1977 atop a Shuttle Carrier Aircraft (SCA) to measure structural loads and ground handling and braking characteristics of the mated system. Five flights with the inert, unmanned shuttle orbiter of the 747 as a transport vehicle for the shuttle and established an operational flight envelope for Approach and Landing Test operations.

These were followed by three captive-active flights, with Enterprise powered up and crew in its cockpit to test controls and other functions. The final phase of the ALT program comprised five free flights in which the orbiter was released from the SCA and glided to a landing at Edwards. Three of these were made with the aerodynamic tailcone on the orbiter, but the last two were made with the tailcone replaced by dummy engines in an effort to replicate actual flight conditions that would be experienced by a shuttle orbiter returning from space.

Except for the last free flight, Enterprise landed on runways laid out on the vast expanse of Rogers Dry Lake.The final flight ended on the 15,000-foot concrete runway at Edwards AFB, an important demonstration of precision landing capabilities necessary for later operational mission.

The ALT program demonstrated the orbiter’s capability for safe approach and landing after an orbital flight from space. It also validated crucial on board control systems necessary for the shuttle program’s next step: the launch of Columbia on the first shuttle mission into space on April 12, 1981.

Enterprise is now on permanent display at the Intrepid Sea Air and Space Museum in New York.