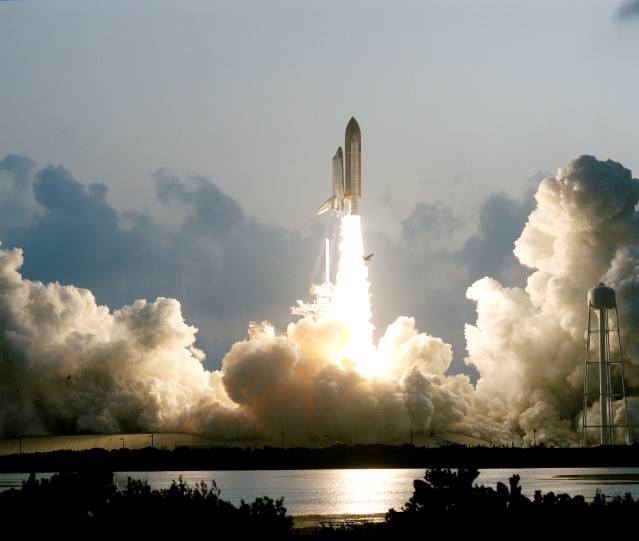 On this date in 1992, space shuttle Endeavour took to the skies for the first time on STS-49. Photo Credit: NASA

Heather Smith
CAPE CANAVERAL, Fla — On May 7, 1992, Space Shuttle Endeavour roared aloft on her maiden voyage. The crew of Endeavour’s STS-49 mission captured and repaired Intelsat VI, which had been stranded in an unusable orbit since its launch atop a Titan rocket in March of 1990. Over the course of 3 spacewalks, the satellite was equipped with a new perigee kick motor and released into orbit. When its new motor fired, the satellite was placed into a geosynchronous orbit. The highlight of the mission was the capture of the stranded INTELSAT VI (F-3) satellite. However, this was no easy task and it would require an effort which would mark s historic first for the shuttle program.. The capture required three EVAs: the first was a planned one carried out by astronauts Pierre J. Thuot and Richard J. Hieb who were unable to attach a capture bar to the satellite from a position on the Remote Manipulator System (RMS); a second unscheduled but identical attempt on the following day; and finally an unscheduled but successful hand capture by Thuot and fellow crewmen Hieb and Akers as Brandenstein delicately maneuvered the orbiter to within a few feet of the 4.5 ton communications satellite.
An ASEM structure was erected in the cargo bay by the crew to serve as a platform to aid in the hand capture and subsequent attachment of the capture bar. EVA 3 with Thuot, Hieb and Akers was the first time that three people from the same spacecraft walked in space at the same time. It would also be the longest spacewalk until STS-102 in 2001.

The satellite was subsequently released into orbit and the new motor fired to put INTELSAT VI into a geosynchronous orbit for operational use. When all was said and done, as is the case with any maiden flight of an orbiter, Brandenstein and Chilton landed Endeavour at Vandenberg Air Force Base 0n May 16, 1992 on Runway 22. All total, the orbiter dipped her wings into the black of space for eight days, 21 hours and 17 minutes.