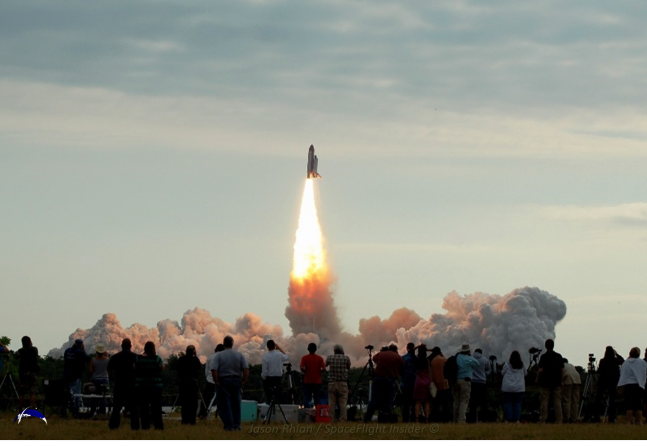 On this day in 2011, space shuttle Endeavour took its final voyage to space carrying aboard six astronauts, two critical instruments for the International Space Station, and four major milestones. Led by Commander Mark Kelly and Pilot Greg H. Johnson, Mission Specialists Mike Fincke, Drew Feustel, Greg Chamitoff and Roberto Vittori of the European Space Agency rounded out the crew for the 16-day mission. Vittori, known as “Ricky Bobby” to his crewmates, would be the last non-U.S. astronaut to fly on a space shuttle mission.

Alpha Magnetic Spectrometer is particle physics detector that is constructed, tested and operated by an international team composed of 56 institutes from 16 countries and organized under United States Department of Energy (DOE) sponsorship. With almost 2,000 days in orbit, AMS has measured over 48 billion cosmic rays since it began operation on the ISS.

At 7:23 a.m. May 29, the hatches between the space station and Endeavour closed for the last time as the shuttle’s crew members prepared for their return to Earth.

Endeavour touched down on Runway 15 at 2:35 a.m. June 1, completing the STS-134 mission and marking the 24th nighttime landing in Space Shuttle Program history.

This was the 25th and final flight for Endeavour, which spent 299 days in space, orbited Earth 4,671 times and traveled 122,883,151 miles, wrapping up an illustrious spaceflight career. She is now on display in the Samuel Oschin Pavillion at the California Science Center in Los Angeles.