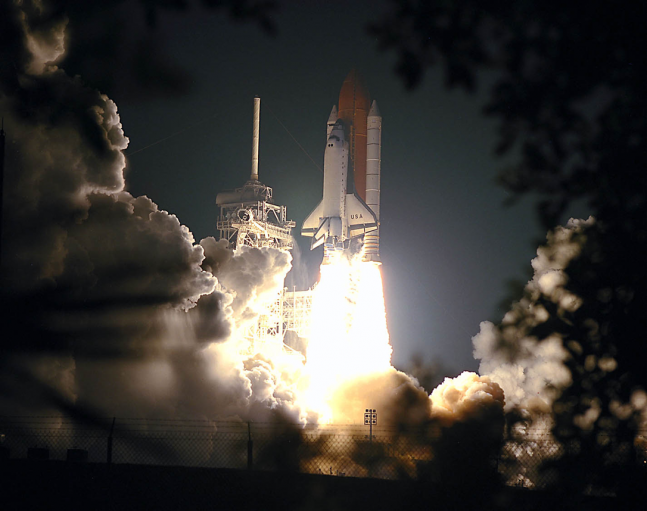 On July 23, 1999 at 12:31 a.m. EDT (0431 GMT), astronaut Eileen Collins became the first female space shuttle commander, leading the STS-93 crew to successfully deploy the Chandra X-ray Observatory. The mission began aboard space shuttle Columbia along with Jeffrey S. Ashby as pilot and Steven A. Hawley, Catherine “Cady” G. Coleman, and Michel Tognini as mission specialists. From the outset, the mission was one filled with excitement and drama, which Collins managed in her calm, collected style. Just five seconds after liftoff one of Columbia’s SSMEs (Space Shuttle Main Engines) experienced an electrical short in one of its primary and secondary controllers. This problem was eventually traced back to poorly routed wiring – which would lead to all of the orbiters having these systems inspected. Then an oxidizer post came loose in one of the SSME’s injectors, which caused a series of events to take place that saw the orbiter placed into a lower-than-planned orbit. This nail-biter of a lift off proved unequivocally that Collins had the “right stuff” to lead a mission into the black.

Later that morning, Chandra was spring-ejected from a cradle in the shuttle’s cargo bay at 7:47 a.m. EDT (1147 GMT), as Columbia flew over the Indonesian Island chain. By flight day two, Chandra was orbiting the Earth in a highly elliptical orbit of about 200 statute miles by 44,000 statute miles.

The Chandra X-ray Observatory was named in honor of the late Indian-American Nobel Laureate Subrahmanyan Chandrasekhar. “Chandra” also means “Moon” or “luminous” in Sanskrit. The Observatory has three major parts: (1) the X-ray telescope, whose mirrors will focus X-rays from celestial objects; (2)the science instruments which record the X-rays so that X-ray images can be produced and analyzed; and (3) the spacecraft, which provides the environment necessary for the telescope and the instruments to work. The observatory just before it was tilted upward for its release from Columbia’s payload bay. Photo Credit: NASA

SWIUS is based around a Maksutov-design Ultraviolet (UV) telescope and a UV-sensitive, image-intensified Charge-Coupled Device (CCD) camera that frames at video frame rates. Scientists can obtain sensitive photometric measurements of astronomical targets. The GOSAMR experiment investigated the influence of microgravity on the processing of gelled sols. It also showed that  improved uniformity resulted in finer matrix grain sizes and superior physical properties. The Space Tissue Loss – B experiment was video observation of cells in culture through the use of a video microscope imaging system with the objective of demonstrating near real-time interactive operations to detect and induce cellular responses. LFSAH was a shape memory experiment that was deployed with hinges offer controlled shockless deployment of solar arrays and other spacecraft appendages. The CCM experiment validated models for muscle, bone, and endothelial cell biochemical and functional loss induced by microgravity stress; to evaluate cytoskeleton, metabolism, membrane integrity and protease activity in target cells; and to test tissue loss pharmaceuticals for efficacy. Electronic Still Camera (ESC) installed in the overhead starboard window of the Aft Flight Deck. The PGIM experiment used plants to monitor the space flight environment for stressful conditions that affect plant growth. The CGBA payload experiment allowed the crew to use it for sample processing and stowage functions. The Generic Bioprocessing Apparatus – Isothermal Containment Module (GBA-ICM) is temperature-controlled to maintain a preset temperature environment, controls the activation and termination of the experiment samples, and provides an interface for crew interaction, control and data transfer. MEMS examined the performance, under launch, microgravity, and reentry conditions of a suite of devices. These devices include accelerometers, gyros, and environmental and chemical sensors. Lastly, the BRIC payload was designed to investigate the effects of space flight on small arthropod animals and plant specimens. The flight crew will be available at regular intervals to monitor and control payload/experiment operations.

Of the STS-93 crew, Cady Coleman remains the only astronaut who has not retired. Coleman’s last flight to space took place in December of 2010 when she became a member of the Expedition 26 crew.

For her part, Collins would go on to a complete a storied career with NASA, commanding space shuttle Discovery on STS-114, the “Return-to-Flight” mission after the Columbia STS-107 tragedy. Collins retired from NASA in 2006.

Columbia successfully landed at Kennedy Space Center’s Shuttle Landing Facility in Florida on July 27, 1999 at 11:20 p.m. EDT (1520 GMT). With 1.8 million added to the spacecraft’s odometer, it was the 12th night landing in the program’s history.

If I remember correctly, that was the heaviest unclassified mission ever flown on Columbia. Most heavy missions flew on the newer orbiters as Columbia was much heavier, and often flew the Spacelab missions.