Our SpaceFlight Heritage: The Chosen 7 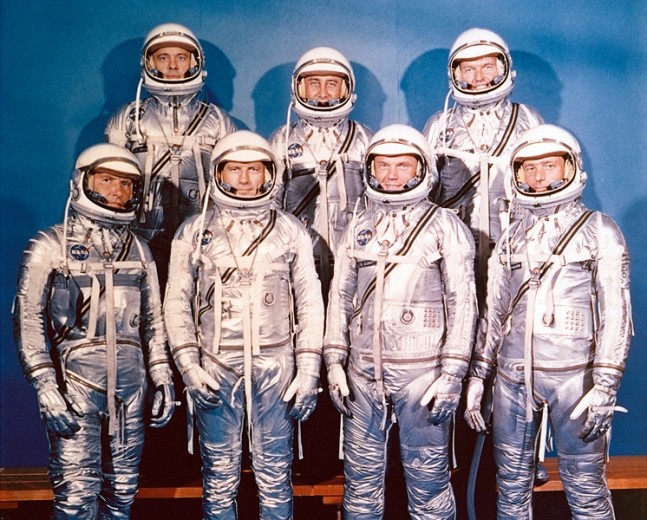 These seven men, wearing spacesuits in this portrait, composed the first group of astronauts announced by the National Aeronautics and Space Administration (NASA). They were selected in April of 1959 for the Mercury Program. Front row, left to right, are Walter M. Schirra Jr., Donald K. Slayton, John H. Glenn Jr., and M. Scott Carpenter. Back row, left to right, are Alan B. Shepard Jr., Virgil I. Grissom and L. Gordon Cooper Jr. Photo Credit: NASA

On this day in 1959, seven men were introduced at a press conference as the first group of astronauts for the National Aeronautics and Space Administration (NASA). Known as the “Mercury Seven” to the general public. The astronauts included Scott Carpenter, L. Gordon Cooper, Jr., John H. Glenn, Jr., Virgil I. “Gus” Grissom, Walter M. Schirra, Jr., Alan B. Shepard, Jr., and Donald K. “Deke” Slayton. As part of the Mercury Program, the seven flew flights from May 1961-May 1963.

Due to the size of the Mercury capsule, those who applied at the time could be no taller than 5 feet 11 inches and weigh no more that 180 pounds. NASA also required that applicants were test pilots with at least 1,500 hours of flight time, were under the age of 40, and had a least a bachelor’s degree. Out of 500 possible applicants, seven were chosen. John Glenn is the only surviving Mercury 7 member.