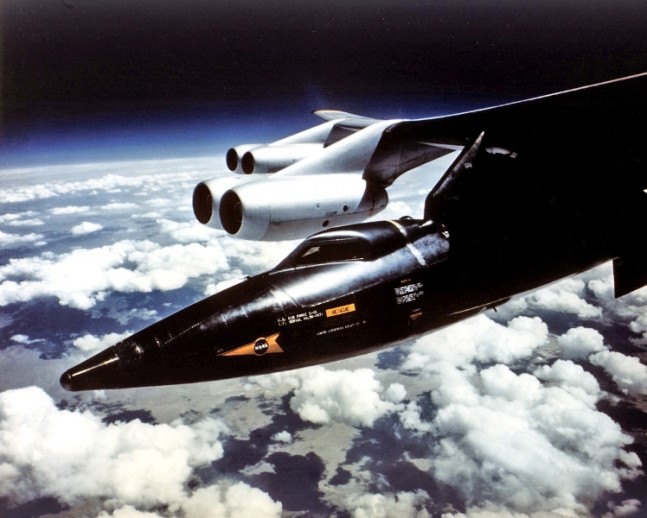 The X-15 space plane on the wing of a B-52 aircraft. Photo Credit: NASA

On this date (June 8) in 1959, A. Scott Crossfield flew the X-15, leading the United States in the first glide flight at Dryden Flight Research Facility, CA.  Within the first 50 years of spaceflight, the X-15 became the world’s first operational spaceplane.  The experimental, rocket-boosted aircraft flew 199 flights with 12 different pilots at the controls from 1959 through 1968. By the time contracts for the airframe and engine were signed with North American Aviation in 1955 and Reaction Motors in 1956, the program already had established goals of flying the X-15 to a speed of Mach 6 and an altitude of 225,000 feet. The precursor organization to NASA, the National Advisory Committee for Aeronautics (NACA), the U.S. Air Force, and the U.S. Navy collaborated in the X-15 program as a joint project in December 1954 by providing resources, including pilots. Eventually the Navy ended its involvement on the X-15 in order to concentrate on aircraft carrier operations.

North American chief project engineer Charles Feltz designed the aircraft with guidance from the Langley Research Center (Aeronautical Laboratory).  The X-15 was a single-seat, mid-wing monoplane that was roughly 50 ft long, with a 22-ft wing span. It was designed to conduct research into such areas as: high aerodynamic heating rates, stability and control, physiological phenomena, and other problems relating to hypersonic flight (above Mach 5).

In order to conserve fuel, the X-15 would be launched from the wing of a B-52 aircraft for high-speed altitude research. The X-15 on the tarmac. Photo Credit: NASA

As North American Aviation’s lead test pilot, Scott Crossfield would take control of the initial flights. According to John V. Becker, former aeronautical researcher at Langley, the X-15 program accomplished many goals for hypersonic flight such as:

As a member of the NACA High-Speed Flight Research Station, Scott Crossfield would fly the X-15  fourteen times out of 199 recorded flights, therefore becoming the first pilot in history to fly the speed of sound. Over the next five years, after becoming a research pilot at Edwards Air Force Base in 1950, Crossfield flew fourteen different aircraft and logged more than 100 rocket flight hours. Altogether, he completed 16 missions mated to the B-52, one glided mission, and 13 powered flights, reaching a maximum speed of Mach 297 (1, 960 miles per hour) and a maximum altitude of 88, 116 feet. As a result, Crossfield became the single most experienced rocket pilot in America’s aerospace history.

As of 2014, the X-15 still holds the record for the highest speed ever reached by a manned, powered aircraft.