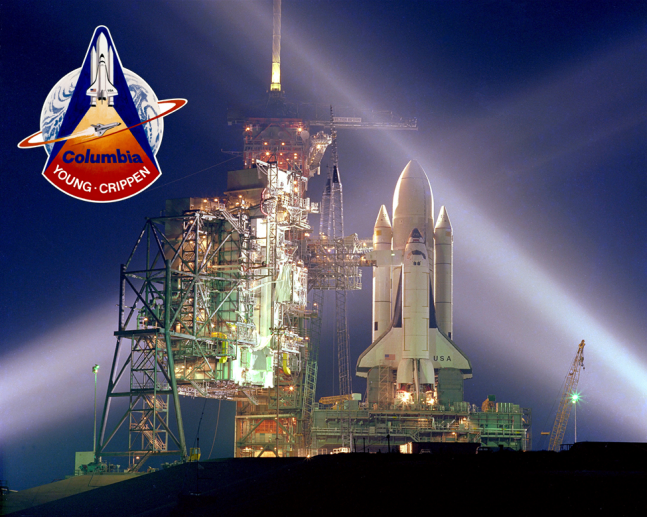 Space Shuttle Columbia rests at Launch Complex 39A prior to liftoff on the first mission of the Shuttle era, STS-1, on April 12, 1981. Photo Credit NASA

April 12 is a historic day in terms of human spaceflight. Today marks the 54th anniversary of Yuri Gagarin’s flight on Vostok 1 from the Baikonur Cosmodrome in the former Soviet Union. He was the first human to ever fly in space. Twenty years later, in 1981, the first reusable spacecraft Columbia was launched from NASA’s Kennedy Space Center in Florida. Decades later, the date, April 12, would be when people from across the globe would celebrate Yuri’s Night – a celebration of humanity’s achievements in space. Humanity first ventured into the black of space for the first time started off when then-27 year old Gagarin shouted out: “Поехали!” (Poyekhali! – “Let’s go!”). The Soviet fighter pilot and first cosmonaut rode his Vostok 1 capsule aloft as it was launched by the Vostok-K rocket, leaving the pad at 06:07 UT.

After one orbit, the Vostok 1 re-entered the atmosphere. At an altitude of almost 4.5 miles (7 km), Gagarin was ejected from the spacecraft and parachuted separately back to Earth. The only witnesses to the landing were a farmer and his daughter who assisted him in finding a phone to call Moscow and inform them of the successful landing. The total flight lasted a total of 1 hour and 48 minutes. Gagarin during a visit to Sweden. Photo Credit: Roscosmos / Energia

Twenty years to the day later, the first reusable spacecraft, Space Shuttle Columbia, launched from LC 39A carrying a two man crew consisting of Commander John Young and Pilot Robert Crippen. This was the first time in American human spaceflight history that a maiden launch of a vehicle was made with a crew on board. STS-1, short for the first flight of NASA’s new Space Transportation System was a “shake down” flight to assess the orbiter’s systems and  its performance.

Though the overall flight was considered “optimal”, there were some issues that were discovered during the mission. Sound waves caused by the SRBs and main engines bounced back up and caused Columbia to oscillate in the aft end visibly. This was corrected in future missions by an improved water sound suppression system.

White paint falling off the ET tank and striking the orbiter was noted by the crew during launch. Approximately 16 tiles were lost on the forward end of the OMS pods and other tile damage was noted during flight. Some areas of the orbiter had experienced extreme heat and slight melting due to improper tile placement.

Columbia successfully landed at Edwards Air Force Base in CA on April 14, 1981. The total mission time was 2 days, 6 hours, and 20 minutes. After inspection and review of the flight data, Columbia completed subsequent missions and was eventually deemed “space worthy” and flew her second mission in September of the same year.

Gagarin’s ship should be “Vostok.”