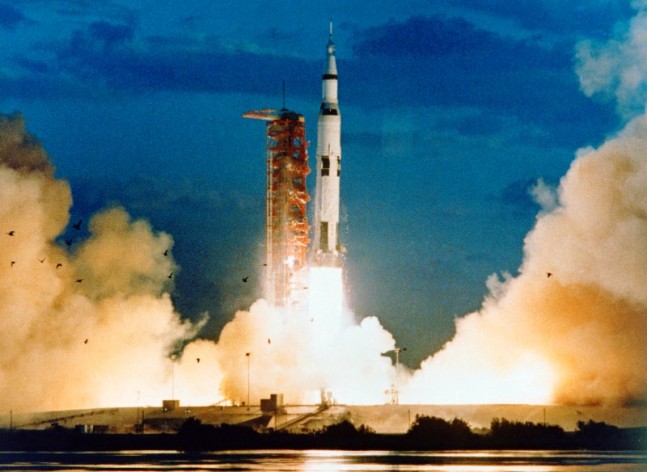 KENNEDY SPACE CENTER, Fla — On Nov. 9, 1967, at 8 a.m. EST (1200 GMT) NASA carried out the Apollo 4 mission. It was the first flight of NASA’s Saturn V booster. It marked the first flight of the Saturn V as well as the Apollo spacecraft. The mission lasted almost nine hours, splashing down in the Pacific Ocean. Apollo 4, also known as AS-501, was the first time that the S-IC first stage and S-II second stage were put to work. In fact, the mission as a whole served to prove that NASA’s systems for human lunar exploration – would work.

Apollo 4’s importance cannot be overstressed as it was pivotal to allowing NASA to land men on the Moon by the end of the decade – and thereby accomplishing President Kennedy’s mandate. The space agency is now poised to conduct another flight that is similar to Apollo 4 – in December of this year (2014).

Apollo 4 takes to the Florida skies – causing the Earth itself to tremble. Photo Credit: NASA

The mission was flown without any crew on board and was what was known as an “all-up” test. In essence, this flight would see almost all of the primary components of the Saturn V and Apollo spacecraft travel to orbit on a shakedown cruise flight.

The decision to fly in the “all-up” configuration was made by the chief of NASA ‘s Office of Manned Spaceflight – George Mueller – and points to an agency less risk-averse than the present day NASA.

This bold path was even different than of the conservative step-by-step approach approved by NASA’s Marshall and Langley centers at that time. It helped to ensure that Apollo would accomplish President Kennedy’s objectives by the end of the decade.

Besides the first and second stages demonstrating their capabilities, the S-IVB third stage also conducted the first in-flight restart. The Apollo 4 spacecraft that flew on this mission, while using a Block I Command Service Module (CSM), the craft had been modified with a number of important “Block II” elements. The most important of these was the spacecraft’s heat shield.

The CSM was placed on a return trajectory which would simulate one that a crew returning from a mission to the Moon would encounter. The launch was the first from the newly-dubbed John F. Kennedy Space Center located at Merritt Island, Florida. The 363-foot tall Saturn V and its precious cargo completed all of the mission goals. Apollo 4 validated the capabilities of the Saturn V rocket, the Apollo CSM and paved the way for the United States to launch men on the Moon. Photo Credit: NASA

For those assembled, accustomed to Atlas, Titan and Saturn 1B boosters – the sheer fury of the Saturn V – was a little unexpected.

With ceiling tiles falling down around him, CBS’ Walter Cronkite, along with his producer, John Gralnick, were forced to brace windows in the CBS building at KSC from the powerful vibrations unleashed by the first flight of the Saturn V. Realizing the monster that they had set loose, and not wanting to reimburse thousands of local residents for the cost of replacing windows, NASA would install a sound suppression system at Launch Complex 39.

In the end NASA dubbed Apollo 4 a complete success and the space agency appears to be using some of the lessons it learned on Apollo 4 – for the agency’s next foray beyond Earth.

On Dec. 4, 2014 NASA plans to launch a flight test article of the space agency’s Orion Multi-Purpose Crew Vehicle atop a United Launch Alliance (ULA ) Delta IV Heavy booster. The mission is being carried out in order to test out Orion’s heat shield, avionics and other key systems.

Unlike Apollo 4, Exploration Flight Test 1 or “EFT-1” won’t be an “all-up” test of the planned booster and spacecraft combination. Orion will not fly on the Space Launch System or “SLS.” NASA, wanting to keep momentum on its crewed deep space objectives moving – has opted to use the most powerful launch vehicle that is presently available – the Delta IV Heavy. Still, EFT-1 will hold similarities to Apollo 4.

When the mission takes to the skies, many of the concepts that the EFT-1 mission will seek to validate, as well as several concepts it will employ – will be direct descendants of those learned on Apollo 4.

In the end, Apollo 4 is remembered what it was – a bold effort, a first step on mankind’s journey into the solar system.

“The important achievement of Apollo was demonstrating that humanity is not forever chained to this planet and our visions go rather further than that and our opportunities are unlimited,” said Neil Armstrong in an interview, where he relayed the importance of Apollo as a whole and unintentionally Apollo 4 in particular. Apollo 4 captured some 755 images of Earth from its vantage point in orbit high above our world. Photo Credit: NASA