Our SpaceFlight Heritage: Apollo 12 – Sailing The Ocean of Storms 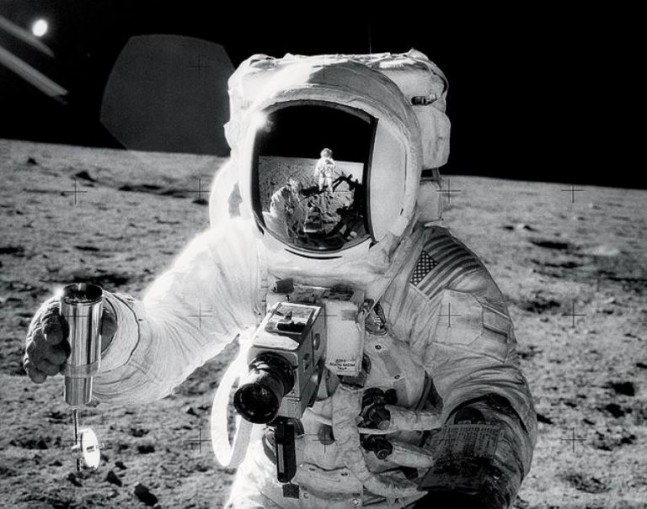 Forty-five years ago today, Nov. 19, 1969, Apollo 12’s Commander Pete Conrad and Lunar Module Pilot Alan Bean set their Lunar Module, Intrepid down on the Moon’s Ocean of Storms (Oceanus Procellarum ). The mission was the culmination of the sixth crewed flight under Apollo overall and it served as confirmation that not only could NASA safely send crews to the lunar surface and bring them back – but that the space agency could also carry out near pin-point landings. The mission got off to a rocky start when on Nov. 14, the massive Saturn V rocket and its precious cargo were struck not once – but twice by lightning on ascent. This knocked most of the systems offline, but a quick save, carried out by Bean, through ground controllers back at Johnson Space Center’s Mission Control salvaged the flight.

That one clue helped Bean remember something from his training, once he did as Aaron had instructed – the mission was pulled from the brink of an abort.

Conrad, ever ready with a quip, detailed the incident with the following quote:

“The flight was extremely normal . . . for the first 36 seconds then after that got very interesting.”

Deciding to go ahead with the flight the trio, also including Command Module Pilot Richard F. Gordon set sail for the Moon. With their course set, the next challenge they focused on was not just landing on the lunar surface – but doing so in a very specific location. On Apr. 20, 1967, NASA landed the Surveyor 3 spacecraft in the southeastern portion of the Ocean of Storms – it had been decided that this would be the target that Apollo 12 would shoot for when they landed.

Apollo 12 was the first crewed lunar landing mission to carry a color television camera with them. Unfortunately the transmission was lost when Bean pointed the unprotected device at the Sun.

Apollo 12 conducted two spacewalks, one of which was to the Surveyor 3 landing site, all total Bean and Conrad traversed the lunar terrain for some 7 hours, 45 minutes and 18 seconds. Located just a short walk away, the duo visited the robotic pathfinder and collected several of its components, including its camera (which would also yield some interesting science of its own).

The camera had the bacteria Streptococcus mitis within it, possibly left by a technician working on the instrument, was discovered, raising the concern of contamination. In essence, this bacteria had survived the journey to the Moon as well as two years on its harsh surface (this discovery has been disputed).

Once all was said and done, Bean and Conrad activated the rocket engine on the LM’s ascent stage and blasted off to meet up with Gordon who had been orbiting high above in the Apollo Command and Service Module the entire time the Moonwalking duo had been conducting their historic journey. Splashing down in the Pacific Ocean, the crew of Apollo 12 wrapped up their cosmic odyssey on Nov. 24, 1969.

This article was edited at 2:15 p.m. EDT on Nov. 20 to reflect that it was NASA CapCom and not EECOM that spoke to the crew of Apollo 12

John Aaron would not talk to Apollo 12 astronauts. That would be Capcom who would communicate with astronauts, Gerald Carr.