Our Spaceflight Heritage: The first steps of Apollo 11 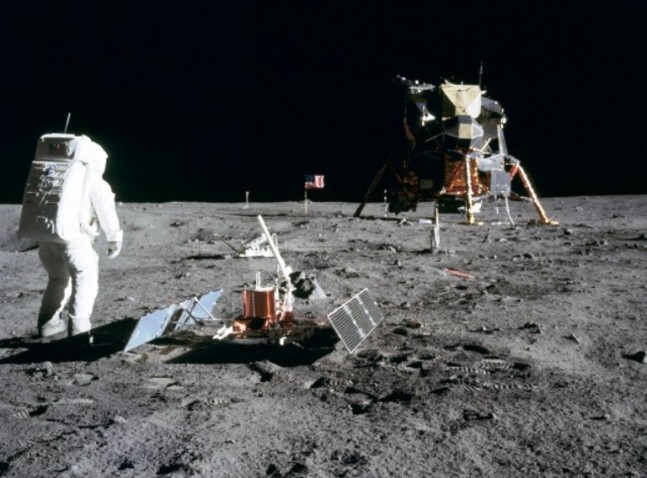 July 20, 1969, astronauts Neil Armstrong and Buzz Aldrin became the first men to ever walk on the moon, cementing America’s lead in the 1960s space race. The purpose of the Apollo 11 mission was to perform a manned lunar landing, fulfilling President John F. Kennedy’s goal of: “We shall go to the moon in this decade.”and return safely to Earth.” The landing successfully occurred at 3:17:40 p.m. EST, exactly 102 hours into the mission becoming the first lunar landing of the Apollo Program and marking the first time that humanity had set foot on another world. It was also the fifth manned flight of the Apollo Command and Service module and the third flight of the Lunar Module. Apollo’s goals went beyond just landing Americans on the Moon and returning them home. Apollo was a three-part spacecraft: the command module (CM), the crew’s quarters and flight control section; the service module (SM) for the propulsion and spacecraft support systems (when together, the two modules are called the CSM); and the lunar module (LM), to take two of the crew to the lunar surface, support them on the Moon, and return them to the CSM in lunar orbit.

The CM, 12 feet (3.63 meters) long and shaped like a blunt cone, was at the front or top of the main spacecraft. The SM, a 23 foot (6.88-meter) long cylinder, was at the rear of the CM. It provided the primary propulsion and maneuvering capability of the spacecraft. The descent stage, or lower part of the LM, contained the engine used for landing on the Moon. This stage was a cruciform structure of aluminum alloy 11 foot (3.23 meters) high, which, with its four legs extended, had a maximum diameter of 31 foot (9.45 meters).

The flight plan called for the first EVA to begin after a four-hour rest period, but it was advanced to begin as soon as possible. Nonetheless, it was almost four hours later that Armstrong emerged from the Eagle and deployed the TV camera for the transmission of the event to Earth. Commemorative medallions bearing the names of the three Apollo 1 astronauts who lost their lives in a launch pad fire, and two cosmonauts who also died in accidents, were left on the moon’s surface. A one-and-a-half inch silicon disk, containing micro miniaturized goodwill messages from 73 countries, and the names of congressional and NASA leaders, also stayed behind. After Aldrin had spent one hour, 33 minutes on the surface, he re-entered the LM, followed 41 minutes later by Armstrong. The EVA lasted approximately 2.5 hours. The first multi-framed panorama image from the footpad of the Lunar Module “Eagle.” The view is looking toward the southwest showing part of the horizon crater rim that was pointed out as being visible from the Eagle’s window.
Photo Credit: NASA

The crew also used the Early Apollo Scientific Experiments Package ( EASEP) which consisted of three experiments. The first of these was the Laser Ranging Retroreflector, which was set up about 14 meters south-southwest of the LM. Second was the Passive Seismic Experiment, which was set up a bit farther out from the LM. The third experiment, the Lunar Dust Detector, was mounted on the Passive Seismic Experiment. In addition to documenting their surface activities, the astronauts also performed two other photographic tasks: close-up stereoscopic photography and panoramic photography. The panoramic photographs were taken at five stations around the lunar module (LM), including one about 60 meters east and a bit south of the LM. Also during the EVA, astronaut Armstrong made a traverse to Little West Crater.

When all was said and done? Armstrong and Aldrin had spent 21 hours, 36 minutes on the moon’s surface – and accomplished one of the greatest achievements in human history.