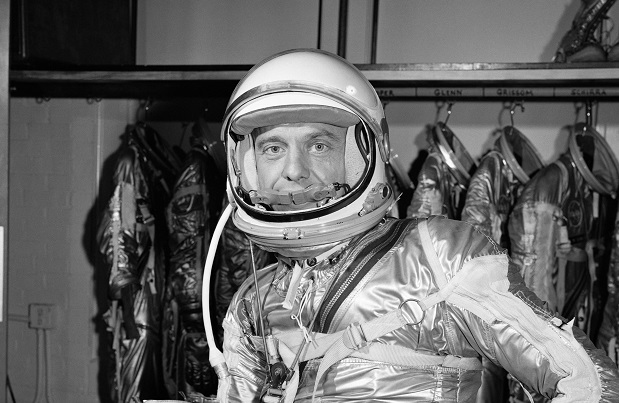 On this day in 1961, America took its first step toward launching humans into space. Showing tremendous bravery a single astronaut, one of the original Mercury seven astronauts looked toward the sky and told the launch control team that it was time to: “Light this candle…”Aboard a Mercury-Redstone 3 rocket, Mercury 7 astronaut Alan B. Shepard, Jr. would become the first American to reach space. Although it was suborbital, Shepard managed to survive the 15-minute flight which lifted him to an altitude of more than 116 miles where he reached a maximum speed of 5,134 miles per hour. His flight came just twenty-three days after the Soviet Union’s Yuri A. Gagarin became the first man in space, Shepard launched at 9:34 a.m. EST on the spacecraft he had named Freedom 7. Alan Shepard speaks with Gus Grissom (on left, back to camera), prior to climbing aboard his Freedom 7 capsule for his Mercury-Redstone 3 mission on May 5, 1961. John Glenn (behind Shepard) waits to help strap Shepard into the spacecraft.
Photo Credit: NASA

At an introductory news conference of the Mercury 7 astronauts, Shepard said that he was eager to participate as soon as he had learned NASA was seeking pilots for space flight.

The announcement that Shepard would definitely be the first American into space came on May 2, 1961, after the first launch attempt had been scrubbed due to weather.

“I think that I was enthusiastic about the program from the start and I enthusiastically volunteered,” he said.

The main objective of the flight was to determine man’s capabilities in the space environment. The few basic in-flight problems included: the development of the automatic escape system, vehicle control during (suborbital) insertion, behavior of space systems, retrofire and reentry maneuvers and landing and recovery. View of the Earth From the Freedom 7 Mercury Capsule
Image Credit: NASA

During the flight, Shepard reported seeing the outlines of the West Coast of Florida, the Gulf of Mexico, as well as Florida’s Lake Okeechobee.

Anticipating his debriefing after his flight, the astronaut had used an analogy from his professional experience to describe his sensations. The best comparison, in his recollection, was riding in the back seat of an F-100F airplane. “It was painless,” he said, “just a pleasant ride.” Freedom 7 splashed down in the Atlantic Ocean where the aircraft carrier Lake Champlain awaited his arrival. The capsule came through the entire flight in such excellent shape that the engineers who went over it with a fine-tooth comb decided that it could easily have been used again.

After his historic flight, he was awarded with the NASA Distinguished Service Medal for his Mercury flight by none other than President John F. Kennedy in a ceremony at the White House. Among his other honors, Shepard was also awarded the Congressional Medal of Honor (Space), the NASA Exceptional Service Medal, the Navy Distinguished Flying Cross, the Langley Medal (highest award of the Smithsonian Institution), the Lambert Trophy, the Kinchloe Trophy, the Cabot Award, the Collier Trophy, the City of New York Gold Medal (1971), and the American Astronautical Society’s Flight Achievement Award for 1971.

Although the flight of Freedom 7 was brief, it was nevertheless was a major step forward for the U.S. in a rapidly-accelerating race with the Soviet Union for dominance in the new arena of space.