Our SpaceFlight Heritage: The 33rd Anniversary of the launch of STS-3 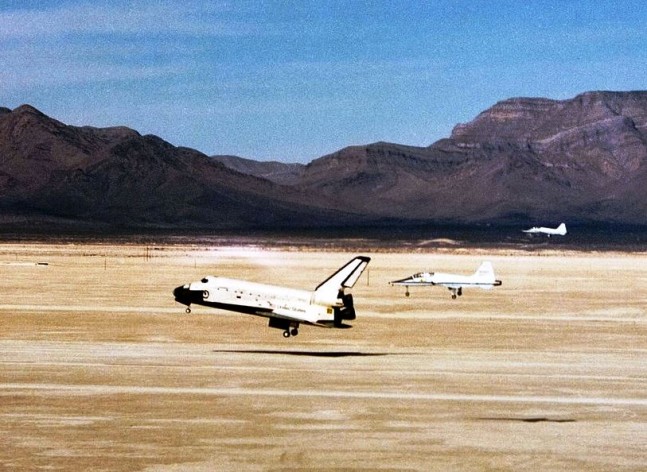 On March 22, 1982, Space Shuttle Columbia lifted off for her third mission (STS-3 ) from Launch Complex 39A at NASA’s Kennedy Space Center. On board were Commander Jack Lousma and Pilot C. Gordon Fullerton. Their mission included testing the orbiter’s Remote Manipulator System (RMS) – also known as the “Canadarm” – conduct thermal testing on Columbia, and to run an array of experiments on board. This was the first launch with the now familiar orange tank. The two previous missions had an external tank that was painted white, but it was discovered that removing the paint saved up to 600 lbs (272 kg) in weight that could be devoted to payload.

The crew of Columbia was tasked with testing the RMS during flight. SpaceLab had an experimental pallet in the payload bay, and the RMS was used to move and manipulate various experiments on the pallet. The crew also did extensive thermal testing on Columbia, exposing various areas of the ship to the Sun.

They found that when the payload bay doors were exposed to the Sun’s heat, the doors would warp slightly and fail to close properly. By rotating the ship to even out the temperature, the payload bay doors returned to their proper form. The payload bay also carried a test canister for the Small Self-Contained Payload program called the Getaway Special (GAS). For the first time, the mid-deck of Columbia carried an array of experiments such as the Electrophoresis Equipment Verification Test, Mono-Disperse Latex Reactor, and the first Shuttle Student Involvement Project (SSIP).

All mission objectives were met, but the crew of Columbia did encounter some minor problems during flight. The toilet malfunctioned on the very first day and, according to Lousma, they had “eight days of colorful flushing”. An APU overheated during launch, but worked well during landing. Three communication links were lost and both astronauts experienced space sickness. This image was taken of Columbia’s heat shield to study its operational temperatures. In this image, Columbia is travelling at Mach 15.6 at an altitude of 184,000 ft (56 kilometers). Image Credit: Kuiper Airborne Observatory / NASA

Flooding at Edwards required Columbia to land at White Sands in New Mexico for the first and only time. This required NASA to move the landing equipment from Edwards to White Sands by train (around 40 carloads) before and during the mission in order to prepare for the landing. High winds prevented Columbia from landing on the scheduled seventh day of the mission, so reentry was postponed for one day and slated for March 30.

During descent, NASA wanted to test the auto-landing program, though it had not been completed yet. They wanted to stay engaged until 500 feet (152 meters) and then Commander Lousma would take over the landing. The astronauts on the auto-landing team, including Charles Bolden, had misgivings about the attempt to use this technology on a “glider” for the first time and expressed them to NASA to no avail. The auto-landing did not disengage as planned.

Bolden explains, “Everything seemed to be going well until just seconds before touchdown, when all of a sudden we saw the vehicle kind of pitch up like this [gestures] and then [vocalizes sound] kind of hard nose touchdown and everything. We found out that just as we had thought, just as we had feared, Jack Lousma had trained to do—just move the stick in both the vertical and the side axis, so, pitch and roll, to disengage the autopilot.” One of the tasks that the crew had to carry out was the test of the Remote Manipulator System (RMS) – more commonly known as the Canadarm. Photo Credit: STS-3 / NASA

Bolden went on to detail the events that would see the third flight of Columbia conclude:

“Well, you need to move it an appreciable amount. We didn’t realize that. Or you could just punch two buttons on the glare shield. The way that he had trained was just to do a manual download with a stick. When he did that, he disengaged the roll axis on the shuttle, but he didn’t disengage the pitch axis. So the computer was still flying the pitch, although he was flying the roll.

“And when he realized what—in fact, I think, as the debrief showed—[C.] Gordon Fullerton just happened to look at the eyebrow lights, and he noticed that he was still in auto and pitch. He told Jack, and so Jack just kind of really pulled back on the stick, and it caused the vehicle to pitch up. Then he kind of caught it and put it back down, and we saved the vehicle; he saved the vehicle.”

Due to the gypsum sand, which is like talcum powder and got into everything, this was the only shuttle landing at White Sands. This was also the last flight for Commander Lousma. Columbia would go on to fly an additional 25 times, the orbiter was lost with all hands on Feb 1. 2003.

Great piece of nhistory. Thanks for posting.