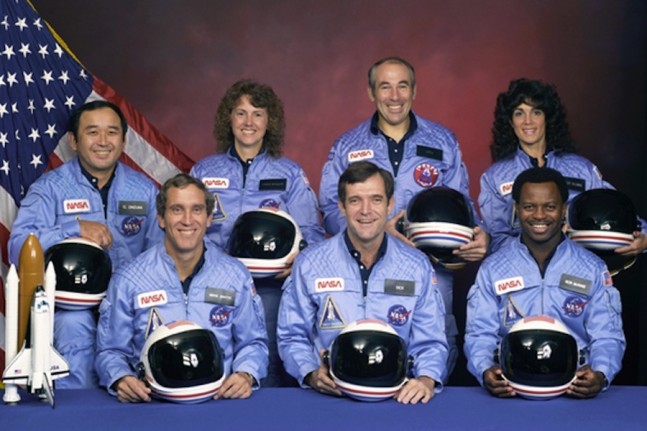 On Jan. 28, 1986 space shuttle Challenger lifted off from Kennedy Space Center’s Pad 39B at 11:38 a.m. EST (1638 GMT). The failure of an O-ring on the shuttle’s right solid rocket booster (SRB) at liftoff led to chain of events that caused the spacecraft to breakup 73 seconds into its flight, resulting in the death of its seven crew members.

The Commander of the mission (STS-51L) was  Francis R. (Dick) Scobee who had previously flown as the pilot of STS-41C in 1984.  The crew of the orbiter included Pilot Michael J. Smith, Mission Specialists Judith A. Resnick, Ellison S. Onizuka, Ronald E.McNair and Payload Specialists Gregory B. Jarvis and Sharon Christa McAuliffe  McAuliffe had been selected as the primary candidate for the Teacher in Space program in 1985. All members of the crew were posthumously awarded the Congressional Space Medal of Honor on July 23, 2004. Planned objectives for STS-51L, Challenger’s tenth mission, included the deployment of two satellites, observations of Halley’s comet and several lessons from space for the Teacher in Space Program. The mission duration would have been 7 days.

The Tracking and Data Relay Satellite (TDRS-B), intended to become  part of NASA’s Space Network, would have been deployed on the first day of the mission using an Inertial Upper Stage Booster (IUB). On Day 3, the Shuttle Pointed Autonomous Research Tool for Astronomy 203 (Spartan 203) would have been deployed. This small satellite contained cameras and scientific instruments for observing Halley’s Comet.

The Challenger disaster led to a 32-month suspension of the Space Shuttle Program. President Reagan appointed the Rogers Commission  to investigate the accident. Members of the Commission included  Neil Armstrong, Sally Ride, General Charles “Chuck” Yeager and physicist Richard Feynman.  The committee found that the failure of the O-ring had been caused by low temperature conditions on the day of the launch. The Rogers Commission also strongly criticized NASA’s decision-making process that led to the launch of Challenger and communications problems between the agency and its contractors.

During the 32-month grounding of the shuttle fleet the solid rocket boosters were redesigned and other safety measures were implemented . NASA made several policy changes on management decision-making for future launches. The Air Force canceled plans to use the shuttle for classified satellite launches from Space Launch Complex 6 at Vandenberg Air Force Base in California and decided to use the Titan IV instead.

The Space Shuttle Program returned to flight on Sept. 29, 1988 with the launch of space shuttle Discovery for STS- 26. Discovery carried the TDRS-C satellite (renamed TDRS-3 once it was deployed) which served as a replacement for TDRS-B.

Barbara Morgan, who trained with Christa McAulliffe in the Teacher in Space program and served as her backup, flew on STS-118 as a Mission Specialist in August of 2007. RIP Challenger,,,,you are not forgotten…