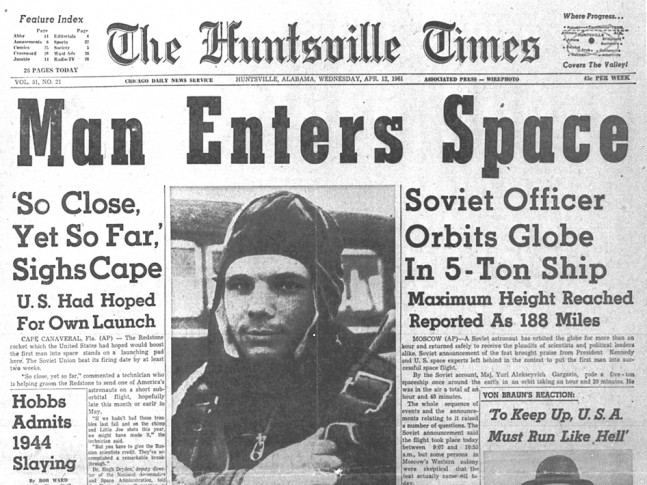 On this day in 1961, a Soviet cosmonaut, Yuri Gagarin, became the first person in space. Gagarin made a 108-minute orbital flight in his Vostok 1 spacecraft. The date of April 12 was already a huge day in terms of space history because of this. Some twenty years later, this date would be underlined in terms of importance when NASA launched the first space shuttle, Columbia, on its very first flight into the black – STS-1.

Mercury astronaut Alan Shepard would go on to become the first American in space less than a month later. The former Soviet Union and the U.S. would continue to compete in space through the 60s. However, with the prize of landing the first man on the Moon squarely in the back pocket of the U.S. – the dynamic went from competition – to collaboration.

The first cooperative human space flight project between the United States and the Soviet Union took place in 1975. The Apollo-Soyuz Test Project (ASTP) was designed to test the compatibility of rendezvous and docking systems for American and Soviet spacecraft and to open the way for future joint manned flights.

Since 1993, the U.S. and Russia have worked together on a number of other space flight projects. The space shuttle began visiting the Russian Mir space station in 1994, and in 1995 Norm Thagard became the first U.S. astronaut to take up residency on Mir. Seven U.S. astronauts served with their Russian counterparts aboard the orbiting Mir laboratory from 1995 to 1998. The experience gained from the Mir cooperative effort, as well as lessons learned, paved the way for the International Space Station. In-orbit construction on the Station began in November 1998, and it has been staffed non-stop with international crews since November 2000.

Gagarin’s flight changed the course of history in many ways from politics to space medicine. Every advancement from his inaugural spaceflight has led to the current comforts for astronauts living on the International Space Station to future commercial flights that might allow ordinary citizens to enjoy the views of space. All of the collaborative events which have taken place in space – started with Yuri Gagarin exulting: “Let’s go!” 53 years ago today.