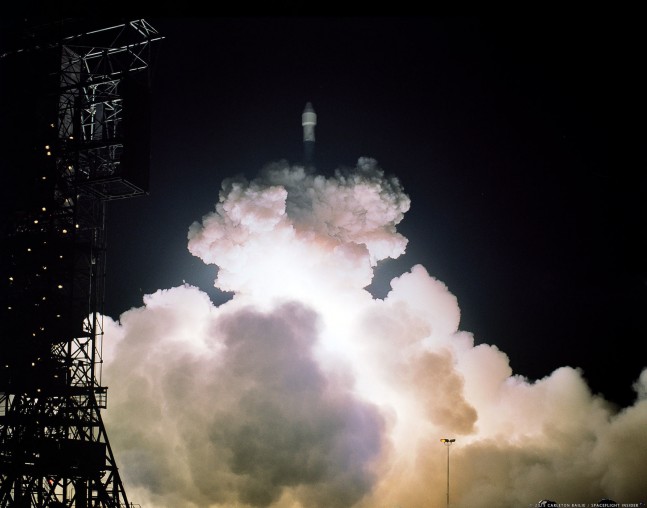 The Delta II, carrying the 408 lb (185 kg) rover lifted off at 11:18:15 p.m. EDT (0318 GMT ) from Cape Canaveral Air Force Station’s Space Launch Complex 17B in Florida. Liftoff occurred without incident. Opportunity then carried out a six-month journey through the void between Earth and Mars, landing on the Red Planet on January 25, 2004.

This was the second launch within a three week period for a Mars-bound rover. Spirit, or MER-A, had lifted off for the Red Planet a month earlier on June 10. Like her sister, Spirit launched atop a Delta II Heavy from Cape Canaveral.

Opportunity’s objectives are to study rocks and soil on the surface of Mars, as well as to seek out evidence of past or current water, calibrate and validate observations made by Mars Reconnaissance Orbiter, and to search for clues to possible life. Opportunity was designed to operate only 90 sols, but it is still traveling across Mars after nearly 12 years. The rover is the longest-lasting of the duo and has traveled farther (> 26 miles) than any other rover in history.

Both of the rovers were and are equipped with an array of scientific tools including a panoramic camera (Pancam), a navigational camera (Navcam), and a Microscopic Imager (MI) which provides high-resolution imagery of the soil and rocks. The rover also has a Miniature Thermal Emission Spectrometer (Mini-TES), Mössbauer spectrometer (MIMOS II) and an Alpha Particle X-ray Spectrometer (APXS). Perhaps one of the most important instrument that Opportunity employs is the Rock Abrasion Tool (RAT) which helps to reveal fresh material beneath Martian rocks.

Arriving on the dusty Martian surface with a planned life of some 90 “sols” (Martian days) Opportunity has been operating for more than 11 years – becoming one of the most successful missions in space exploration history – and it all started from Cape Canaveral on this date in spaceflight history.

I’VE BEEN A LIFELONG PASSIONATE BELIEVER IN OUR NATIONAL AERONAUTICS AND SPACE ADMINISTRATION AND OUR SPACE PROGRAMS EVER SINCE KINDERGARTEN IN 1960-1961.MY MOST PRECIOUS AND BELOVED MOM GOT ME INTERESTED AND FASCINATED ALL THINGS SPACE.AND IN SPITE OF ALL THE PROBLEMS,TRAGEDIES AND SETBACKS MY LOVE FOR NASA HAS NEVER EVER WAVERED!