Our SpaceFlight Heritage: One giant leap, the flight of Apollo 11 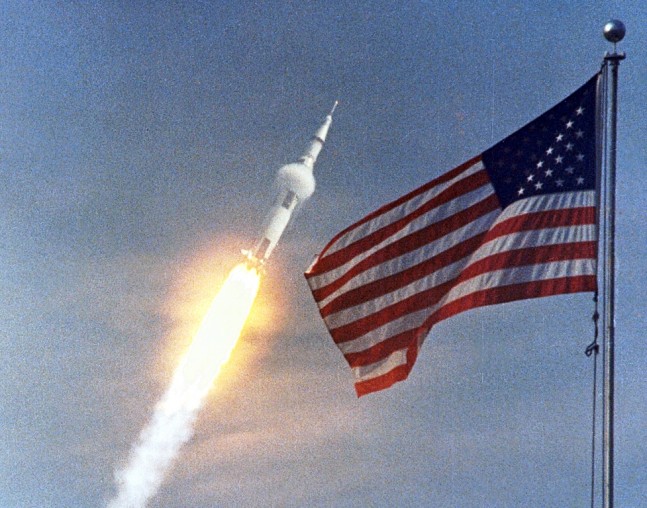 Forty-six years ago today, the crew of Apollo 11 lifted off for the Moon - and the history books. Photo Credit: NASA

Forty-six years ago today, on July 16, 1969, the crew of Apollo 11 lifted off from Launch Complex 39A at NASA’s Kennedy Space Center in Florida – for the Moon. At 9:32 a.m. EDT (13:32 GMT), the Saturn V rocket SA-506 lifted off with 7.5 million lbs. of thrust carrying the crew consisting of Neil Armstrong, Edwin “Buzz” Aldrin, and Michael Collins towards the Moon for a historic landing just four days later.

After two prior flights that went on to orbit the Moon by the crews of Apollo 8 and Apollo 10, the trio of Apollo 11 was ready to fulfill the late President Kennedy’s goal of, “… I believe that this nation should commit itself to achieving the goal, before this decade is out, of landing a man on the Moon and returning him safely to the Earth.”

Each of them was experienced, having flown before on previous missions during the Gemini Program. The massive Saturn V booster lifted off without any major issues placing the astronauts into low-Earth orbit (LEO) about 100 miles in altitude above our home world. After one and a half orbits, the third stage of the Saturn V rocket ignited and set the Apollo 11 crew on course with history.

In attendance for the launch was Charles Lindbergh, a guest of Neil Armstrong. Lindbergh was the first person to fly solo across the Atlantic in 1927 aboard his Spirit of St. Louis aircraft. NASA had more than 20 thousand VIP guests alone including senators, congressmen, ambassadors, military, and even actors such as Johnny Carson. Former President Johnson and former NASA administrator James Webb were also in attendance. Though the Wright brothers had passed away, Armstrong carried two pieces from their Wright Flyer on board – to honor their contribution to the goal of breaking humanity free of gravity’s grasp. Nearly one million people lined the beaches along Florida’s Space Coast, with millions more watching the event on television from all over the world. President Nixon watched the launch from the Oval Office at the White House. The launch ended up being covered by around two thousand journalists from across the globe.

Others argued that since it was an American venture, the United States flag should be planted. The reason this was such a controversy was that, in the past, the “planting of the flag” indicated taking possession of a land or territory which, in this case, was in direct violation of the 1967 United Nations Treaty on Principles Governing Activities of States in the Exploration and Use of Outer Space, including the Moon and Other Celestial Bodies (commonly known as the Outer Space Treaty).

NASA, in February of 1969, set up a Committee on Symbolic Activities for the First Lunar Landing to study the issue. The decision was made to use the United States Flag and have a plaque showing both hemispheres of the Earth representing all of mankind. The night before the launch, a team from Marshall Space Flight Center led by Jack Kinzler attached the flag and plaque to the Lunar Module Eagle.

In the end, while the flight of Apollo 11 was an American effort, one member of the crew noted that if politicians had conducted the mission themselves, our world would likely be a very different place.

“I really believe that if the political leaders of the world could see their planet from a distance of 100,000 miles, their outlook could be fundamentally changed. That all-important border would be invisible, that noisy argument silenced. The tiny globe would continue to turn, serenely ignoring its subdivisions, presenting a unified façade that would cry out for unified understanding, for homogeneous treatment. The Earth must become as it appears: blue and white, not capitalist or Communist; blue and white, not rich or poor; blue and white, not envious or envied,” said Apollo 11′s Command Module Pilot Michael Collins during a 2009 NASA interview.

Please help me with my memory. As I recall, Apolo 8 was the first manned circumlunar flight and was not inserted into lunar orbit. Am I mistaken about this?

Thanks Jason, I guess my mind is playing tricks on me…senior moment, no doubt.