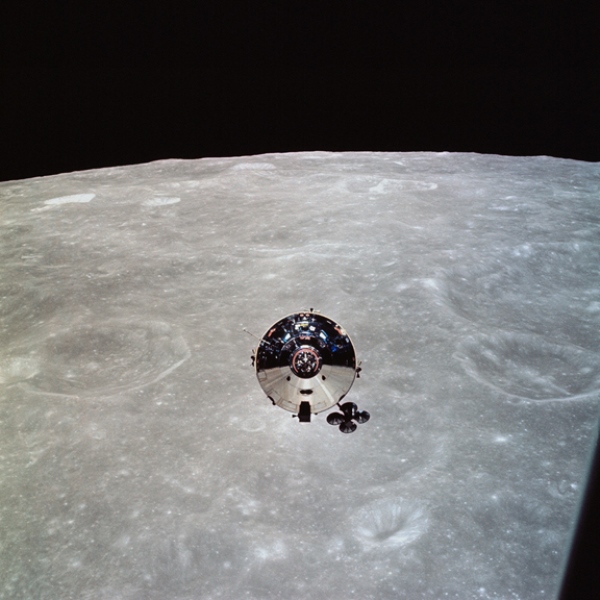 On May 18th, 1969, at 12:49 p.m. EDT, Apollo 10 blasted off from Cape Kennedy on the fourth manned flight of the Apollo Project and the final rehearsal for the first manned lunar landing. Aboard were astronauts Thomas P. Stafford (Commander), John W. Young (Command Module Pilot), and Eugene Cernan (Lunar Module Pilot). Apollo 10’s main purpose was to test rendezvous and docking operations between the Command and Service Module (CSM) and the Lunar Module (LM) in lunar orbit. After a flawless launch and three-day outbound journey from Earth, Apollo 10 entered orbit around the Moon. Stafford and Cernan then transferred to the LM, undocked it, and flew within 15,200 meters of the Moon’s surface, practicing the whole sequence of descent maneuvers that Apollo 11 would go through two months later, minus the actual landing.

Up to this point, the mission had gone entirely to plan without any undue alarms. But now came near-disaster. After the LM descent stage had been jettisoned prior to re-docking, the ascent stage began to violently roll, due, it turned out, to the crew having accidentally entered commands into the flight computer twice. The astronauts took over control manually but Cernan later reported seeing the horizon sweep past the ship’s window eight times before the vehicle was brought under control. NASA played down the emergency but it’s believed that the crew and LM were only a few more rolls and a matter of seconds away from being lost  With the ascent stage stabilised, there followed a textbook rendezvous and re-docking with the CSM.

Splashdown took place in the Pacific Ocean at 12:52 p.m. EDT on May 26 – almost exactly eight days after the launch. The Apollo 10 command module safely splashed down some 400 nautical miles (740 km) east of American Samoa. With the completion of Apollo 10 – the stage was now set for the triumph that would be Apollo 11. A whole slew of records was set by the Apollo 10 mission. Its crew was the only one in the Apollo Project to have all flown previously in space and the only crew to all fly again on subsequent Apollo missions. Apollo 10 achieved the highest speed ever attained by human beings – 24,790 mph (39,896 km/h) – and the highest speed of re-entry into Earth’s atmosphere by any manned spacecraft; indeed, this was highest re-entry speed of any spacecraft to return to the surface until it was surpassed by the Stardust probe. It also had another first, one whose importance was impressed on NASA officials by the mission’s commander.

“I had flown two flights before, you know space is so beautiful when you look down at the Earth with all that you see – but all we had was the Hasselblad film and little 16 millimeter cameras, it was just short clips. I said, we ought to do better than this. So, I got with a group and we said, let’s put together something,” said General Thomas P. Stafford during a recent interview, during which he detailed how Apollo 10 became the first mission to have a color video camera brought on board.

Apollo 10 was the only mission in the series to lift off from Launch Complex 39B at the Cape and the first to carry a color TV camera aboard a crewed spacecraft. Finally, the ascent stage of Apollo 10′s Lunar Module, Snoopy is the only space-flown LM to remain intact. With the exception of Apollo 13, the LMs which carried out Apollos 11-17 ended up being intentionally slamming into the surface of the Moon as part of a seismological study.

Snoopy’s fate however would be different from that of its kin. Its ascent stage continued on a trajectory past the Moon into an orbit around the Sun, where it remains to this day. Snoopy’s exact whereabouts are a mystery.