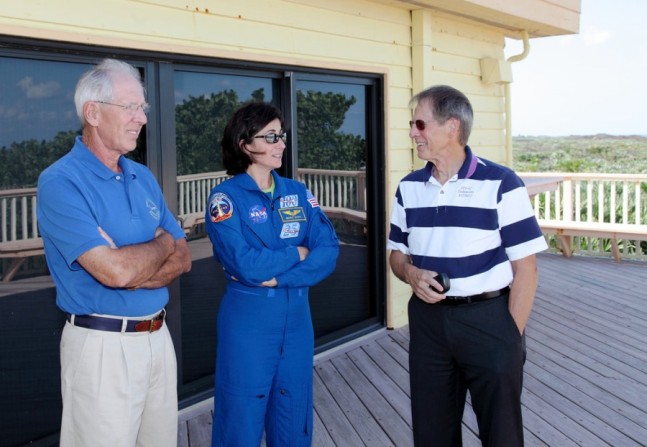 CAPE CANAVERAL, Fla — It is perhaps one of the least-covered (in terms of the press) components of astronaut “life” at Cape Canaveral Air Force Station and the adjacent Kennedy Space Center – the Astronaut Beach House. However, just going to the historic site, really does not allow one to get a feel for the true background, the history of the place. For that, one would need to speak with people who have experience with the structure, who have contributed to its history. To accomplish this, three former and current members of NASA’s astronaut corps traveled out to the Beach House where their journeys into the black of space – found their start.

One of the questions our NASA guides asked us when escorting us out to the Astronaut Beach House was; “What are you expecting to see out there?” The simple truth was that we did not expect to see much of anything. The real story? Was with the three space flyers who had joined us on that day. They helped to peel back the curtains of history of the Beach House, its narrow escape from demolition, its ride through space flight history – into the present day.

Robert C. Springer, a retired Colonel with the United States Marine Corps., Samuel T. Durrance, and current NASA astronaut, Nicole P. Stott toured the Beach House with SpaceFlight Insider’s founder, Jason Rhian. They discussed their times at the Beach House, how it and the events that are hosted there have changed over the course of the intervening years and more. A wine case, stocked with wine bottles from many of NASA’s crewed ventures to orbit adorns the interior of the Astronaut Beach House. Photo Credit: Alan Walters / Alan Walters Photography

For the trio of space flyers, returning to the Beach House brought back a rush of emotions and memories, something that they shared with us.

“This was a place where crews and their families could spend some time together before ‘the big day,'” Springer said. A veteran of two shuttle missions, Springer noted that the structure – was not always as neat as it was at the time of this interview. “The Beach House really had this feel of a somewhat neglected bachelor’s pad.”

Built in 1962, what would come to be known as the Astronaut Beach House was purchased, via eminent domain, for $31,500 in 1963 and was, at one time, a part of the Neptune Beach subdivision at Cape Canaveral. Standing some two stories in height, the structure was acquired in order to meet the land requirements for the expanding Kennedy Space Center.

Whereas the other houses and structures were torn down, the Beach House was saved from the wrecking ball. Initially used as a place of respite for crews about to thundered aloft on NASA’s Mercury, Gemini and Apollo Programs – the Beach House’s purpose would evolve over the years. Originally it was given the unwieldy moniker of the “Astronaut Training and Rehabilitation Building.”

These days, the Beach House is used by the space agency as a place to coordinate and to gather for social occasions or for official meetings and has been renamed the “Kennedy Space Center Conference Center.”

The structure sits between Cape Canaveral Air Force Station’s Space Launch Complexes 40 and 41, which are used today to launch SpaceX Falcon 9 and United Launch Alliance Atlas V rockets (respectively), and is positioned a mere 165 feet (50 meters) from the steady beat of waves coming in from the Atlantic. The Beach House was purchased by NASA in 1963 for $31,500. Photo Credit: Alan Walters / Alan Walters Photography

The structure has a rather colorful history and a part of the history is on proud display. Within glass cases were an array of wine bottles with decals from some of the missions that had lifted off into the black. Upon spotting them, the trio of space flyers began to search for one another’s flights.

In the end, all three of the astronauts noted that the facility was a place steeped in history, something that brought back fond, humorous reflections of a time when the United States regularly traveled past the wispy barrier of the atmosphere to orbit – and points beyond.

“You weren’t going to learn anything new in the last few days before your flight,” Durrance noted with a smile as he gazed out at the waves roaring in. “This place was great to reflect on what you had done that had brought you here – as well as what was about to come.”

When I was a NASA employee for 34 years at KSC I visited the beach house 3 or 4 times. It was used infrequently as a location for small groups for presentations. We had to attend a two day session there concerning how to be a good employee, a somewhat psychological training session levied on us by upper level management which seemed to happen every 10 years or so. We also had a party gathering or two to celebrate significant events in small groups.

I enjoyed the presentation. I worked out there on Apollo and never knew that house existed.
Thank you, Bob Watkins