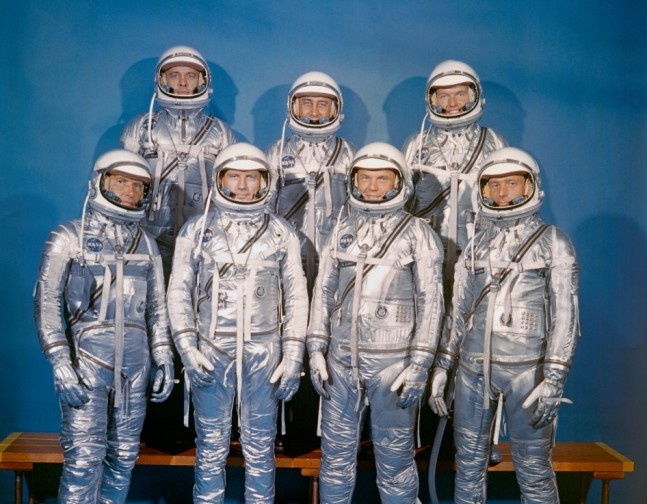 This day, April 9, is a pivotal one in terms of human exploration of the Solar System – especially for manned spaceflight. On April 9, 1959, NASA announced the first group of astronauts that had been selected to conduct the space agency’s first crewed efforts to orbit. The Soviet Union proposed Vostok as a “space trainer”. Also, during the second week of April 1965, control of manned missions was moved from Cape Kennedy in Florida to Houston, Texas.

As the race to the Moon between the Soviet Union and the United States picked up pace, a number of key events began to take place on the same day of the year. As NASA progressed from the Mercury, to Gemini, and eventually the Apollo Programs, the Soviet Union moved from the Vostok to Voskhod to Soyuz spacecraft.

On April 9, 1959, at a press conference held in Washington D.C., NASA’s Administrator at the time, T. Keith Glennan, introduced seven pilots – who would serve to change the face of space exploration history. The Mercury Seven, as they came to be known, Scott Carpenter, Gordon Cooper, John Glenn, Virgil I. “Gus” Grissom”, Wally Schirra, Alan Shepard, and Donald K. “Deke” Slayton, entered the public’s consciousness – and, in the years to come, would make the U.S.’ first steps into suborbital and then orbital space.

The seven men, in varying degrees, would go on to fly on all three of the crewed U.S. initiatives that led up to the first lunar landing in 1969 – and beyond (Slayton was a part of the 1975 Apollo Soyuz Test Project). The United States would conduct six successful missions to the Moon between 1969 and 1972. Meanwhile, half a world away in Russia, Mstislav Keldysh and Sergei Korolev, during a meeting between the VVS and OKB-1 engineers, suggested that the Vostok be used as the first “space trainer”.  In essence, cosmonauts would use the Vostok to train for missions on the Soyuz spacecraft. According to a daily report issued by the Federal Aviation Administration, this is similar to the method used to practices employed by the Soviet Union for fighter aircraft of that time.

In 1965, just four years prior to Neil Armstrong and Buzz Aldrin placing the first boot prints into the lunar regolith, NASA’s Associate Administrator for Manned Space Flight at that time, George E. Mueller, announced that the control of crewed flights would transfer from Cape Kennedy, Florida, to Houston, Texas, at what would come to be called the Johnson Space Center. Houston would now control crewed flights from liftoff – until recovery.

For the United States, the exciting era that was about to (briefly) take place, was perhaps best summed up when the first U.S. astronaut took to the skies:

From the Soviet side of the equation, perhaps the most precise statement that sums up the spirit of exploration, the excitement that this age initially inspired: Members of Mission Control celebrate the safe splash down of the Apollo 13 crew in 1970 from the Manned Spacecraft Center located in Houston, Texas. Photo Credit: NASA

I can remember the summer night in 1969(I believe) standing out in the field at Camp Lejeune,N.C. with about 10-15 Marines listening to a small pocket sized transistor radio that one man was holding above his head so that the rest of us could hear Armstrong es Aldrin step out onto the Moon for the first time.It was a sharp clear with a full moon.I still see that view looking up while the rest of us broke into cheer.Yes,history was again being made that night,if I live to 100 I shall always remember it,wonderful.Semper Fidelis!
Respectfully,Gregory L.Mitchell,West Caldwell,N.J.