Our SpaceFlight Heritage: STS-135 and the end of the beginning 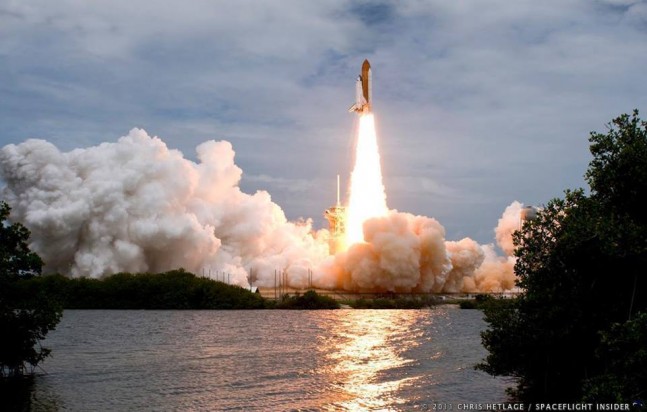 KENNEDY SPACE CENTER, Fla — NASA’s Space Shuttle Atlantis lifted off from Kennedy Space Center’s Launch Complex 39A at 11:29 a.m. EDT (15:29 GMT) on July 8, 2011. Unlike most of the shuttle flights that took place after the loss of Space Shuttle Columbia in 2003, STS-135 (the mission’s official designation) was a resupply run, rather than an assembly mission to the International Space Station. It also was the final time that one of the space agency’s orbiters would take to the skies.

Atlantis would remain on orbit until July 21, 2011, a day longer than originally anticipated. While on orbit it delivered supplies to the space station, as well as the Robotic Refueling Mission, TriDAR, and the Picosatellite Solar Cell Testbed 2. Of almost equal importance was the completed experiments and a failed ammonia pump module that the roughly 26-year-old orbiter (at the time of this mission) brought back to Earth. The mission had the smallest crew of any shuttle mission since April of 1983 – just four astronauts. Veteran shuttle commander Chris Ferguson led the mission, along with Doug Hurley (pilot) and mission specialists Sandra Magnus and Rex Walheim rounding out the crew.

Inside Atlantis’ cargo bay was the Raffaello Multi-Purpose Logistics Module (MPLM) along with a Lightweight Multi-Purpose Carrier (LMC). STS-135 marked the only mission where Atlantis carried an MPLM. The mission was made possible thanks in part to the NASA 2011 authorization act along with a contract extension with United Space Alliance which provided support for both STS-134 and STS-135.

The Shuttle Program actually began in 1972 as part of a two-step effort constituting a reusable spacecraft that would fly to orbit to construct a space station – which would, in turn, be used as a spaceport from which to send crews to the planet Mars.

However, this grand vision was not to be.

After the race to the Moon had been “won” by the United States, America lost interested in space. The Space Agency’s budget was already undergoing cuts. It was decided that NASA could either have the shuttle or station – but not both. They chose the shuttle.

The first of the orbiters, Columbia, took to the skies in April of 1981. For the next seventeen years, the shuttle would be a spacecraft without a destination. With the ever-changing design of Space Station Freedom, Alpha, the International Space Station,  the orbiters did not have a place to fly to until 1998 – when the first segments of the station were sent aloft.

This promised to be a new era, one where the shuttles would have a place to fly to (the shuttles had flown to the Russian space station Mir in preparation for the construction of the ISS) – once the orbiters had served as the primary means from which to build the new station. As with most things, money matters and NASA was not considered a priority. The Clinton Administration decided to make the space station an international effort to help lower cost and to keep Russian scientists occupied with peaceful efforts.

Some 16 different nations would be brought onto the project – including Russia. The former Soviet Union demanded a few concessions, one of which was its orbit – 51.65 degrees. While this orbit allows Russia to easily send spacecraft to the ISS, it is not useful in terms of serving as a platform – a spaceport – from which to send missions to distant destinations. Atlantis had been in service for 26 years when she completed STS-135 in 2011. Photo Credit: Jim Siegel / SpaceFlight Insider

Moreover, with the loss of Columbia in 2003, the shuttle would come to a close when the primary construction of the Space Station was complete. Construction of the ISS was essentially completed with the final flight of NASA’s youngest orbiter, Endeavour, on STS-134. Atlantis, which it had been thought had conducted its final flight with STS-132 would fly one last time – STS-135.

“I got to ride on the Mobile Launcher as we rolled Atlantis out to the launch pad with Fergie (Commander Chris Ferguson) and the rest of the crew; that was a special time as there was only eight or ten of us on the Mobile Launcher,” Michael Leinbach, NASA’s Launch Director for STS-135 told SpaceFlight Insider. Leinbach stated that he went out to LC-39A and looked up at Atlantis, reflecting on the good that NASA had done for the country. Despite the fact that the program morphed into something other than what it was originally intended to be, there can be little doubt that the shuttles’ legacy is secure.

The Shuttle Program was supposed to be a part of a larger effort to expand humanity’s presence throughout the Solar System – by sending astronauts to Mars. It was meant to be the beginning of a journey outward. However, with the delay of the station, the two accidents the shuttle had encountered, and the requirements placed on the ISS by Russia, STS-135 would be the end of that beginning – and that chapter started to close on this date in spaceflight history. One shuttle veteran shared his thoughts on the fleet’s retirement just prior to the final launch of Atlantis.

“I think we ought to form a chorus with the three remaining orbiters, and, as a fan of country music, I know that Brooks and Dunn have a great song, it’s called: ‘You’re going to miss me when I’m gone’. I believe that is what going is going to happen,” Bob Crippen, the pilot on STS-1 told SpaceFlight Insider during a past interview. I worked that mission for NASA from the firing room at launch and on the runway for landing working mechanisms. At the landing we had Bruce Melnick with us doing the measurements and inspecting the mechanism systems in preparation for the trip to the OPF.

On STS-1 I was on the console in the firing room the night before until my lead took over on 3rd shift for launch for PVD. Then the landing team took off from the cape skid strip and flew directly to DFRC landing in the middle of the night to support the landing 2 days later.

It was extremely exciting and I felt very privileged to be able to start my career and end it supporting the shuttle program including a 2 year stint at VAFB prior to the cancellation of shuttle from VAFB. Nice story on the climax to a great program.

The Shuttle was a very versatile, capable, and complex vehicle whose retirement was inevitable the day we lost Columbia. But our country should not have retired it until a replacement system was flying. This would have ensured American manned access to orbit on American rockets and eliminated our dependency on Russia for our astronauts to get to the ISS. In 2008, then-candidate Obama promised an increase in NASA’s budget and reduce the “gap” between Shuttle and its successor. At that time the gap was 2 years. Instead, the Administration did not increase the budget AND cancelled the Constellation program. We are now 4 years into what will become a 6 or 7 year gap at best. This country should pick a strategy for NASA, and in particular manned spaceflight, and stick to it regardless of the inhabitants of the White House and Congress. Easy to say, historically difficult to do. What would help? Enacting a ten-year term for the NASA Administrator is a good first step. A logical, long term goal/mission supported by the public and foreign partners is mandatory. This country can achieve great things given the desire, funding, and an unwavering commitment.

I am not going to praise Obama for his support or lack of but this congress has been staunchly against extra spending. Certainly there are congressmen from both sides of the aisle with a vested interest in space but there are far more who aren’t that interested. Bush’s un-achievable grand plan to return to the moon and Mars was impossible too from a budget standpoint. Until the entire congress wants to spend the money we will just plod along and it doesn’t matter too much, without a big external threat (such as the Russians in the late ’50s), that will cause us to go beyond this plodding course. It is not a partisan problem so much as simply a nicety that does not need to have extra money spent on it and is not much of a campaign issue in this time either.

Hopefully, with private companies building & owning their manned space capsules, there will never again be a gap.