Our SpaceFlight Heritage: Sojourner – Born on the 4th of July 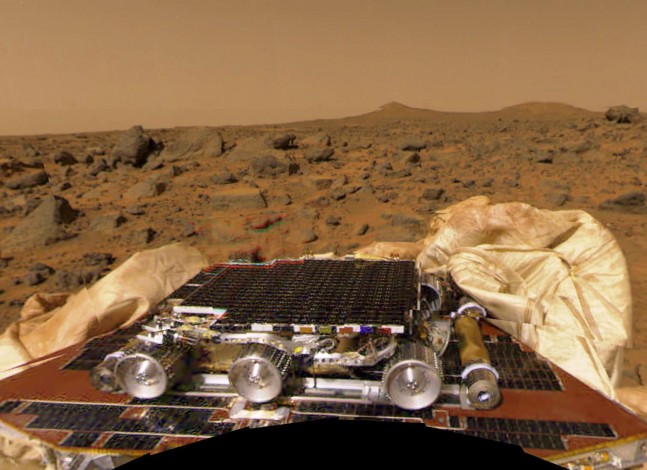 Whereas the 4th of July is usually celebrated with a display of fireworks - NASA celebrated by getting dirty on July 4, 1997. Image Credit: NASA / JPL-Caltech

Eighteen years ago today, on the fourth of July, 1997, NASA’s Mars Sojourner rover, cocooned within the Pathfinder landing vehicle, who was itself covered in airbags, touched down on the surface of Mars. The landing marked the first time that a rover would land on the surface of the Red Planet – it would not, however, be the last.

The 25 lbs (11.5 kg) rover lifted off from Cape Canaveral Air Force Station’s Space Launch Complex 17B on December 4, 1996. Sojourner carried two cameras – one in the front and one in the rear – as well as several science experiments. The tiny robot was only given a life span of 7 Sols (the Martian equivalent of days) – it, like so many NASA spacecraft, would far exceed this estimate, lasting 83 Sols. Sojourner, part of NASA’s Discovery program, a series of planned, low-cost missions, each with very specific scientific objectives was the first spacecraft to touch down on the surface of Mars in more than two decades. The last spacecraft to do so were NASA’s Viking landers. The two landers landed on the dusty Martian terrain in late summer and early fall of 1976.

When all was said and done, Pathfinder and Sojourner returned approximately 2.6 gigabits worth of information. For the Internet, a relatively new creation at that time, the most important aspect of which was the more than 16,000 images from the lander’s camera. Some 550 of these came from Sojourner. All total, NASA has estimated that the mission beamed back some 8.5 million temperature, pressure and wind measurements from the landing site at Ares Valles.

While the rover did not traverse any great distance on the surface of Mars (330 feet or 100 meters), it did set the stage for a new era of exploration of the flash-frozen world.

Six years later, NASA would launch the twin Mars Exploration Rovers, Spirit and Opportunity. Scheduled to last 90 Sols, Opportunity is still studying the surface of Mars to this very day. Each of the robotic geologists is about the size of a golf cart, weighing 408 lbs (185 kg) and carrying numerous scientific instruments, including a robotic arm which itself carries several instruments. In August of 2012, NASA launched the Mars Science Laboratory rover, Curiosity. The size of a Mini-Cooper, Curiosity was too large to land on Mars via the airbag method used by both Pathfinder and the MER rovers. Instead, the MSL rover used the James Bond-esque Sky Crane jetpack to complete the descent. The Martian rover has evolved past the MER versions in that MSL uses a nuclear power source and weighs in at an impressive 1,982 lbs (899 kg). Like all of the rovers who preceded her, Curiosity has already surpassed its planned two-year mission.

Whereas the names, Spirit, Opportunity, and Curiosity will doubtlessly go down in spaceflight history for all that they have taught us about the history of the Red Planet, they accomplished what they did, on the shoulders of a tiny robot – one about the size of a shoebox.

Since July 4, 1997, NASA has improved and expanded upon the capabilities of its robotic scientists, maturing them to the level of sophistication that Curiosity employs today. The space agency continues to utilize the lessons learned, the technology employed in the late 90s, with plans to launch the Mars 2020 rover – a close cousin to Curiosity.

When that rover follows the four robots that preceded her, it will be the latest descendant of an ancestor, whose iconic journey was born on the fourth of July.

Video courtesy of The Mars Underground