Our SpaceFlight Heritage: Carpenter’s run – the flight of Aurora 7 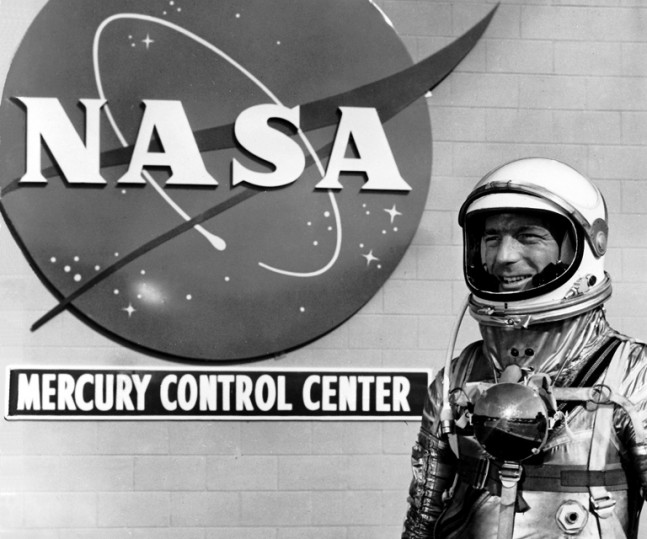 On this date in spaceflight History – May 24, 1962 – another milestone in the U.S. space program took to the skies. M. (Malcolm) Scott Carpenter, one of NASA’s original Mercury 7 astronauts, lifted off at  7:45 a.m. EST (1145 GMT) from Cape Canaveral Air Force Station’s Space Launch Complex 14. Carpenter’s flight, while only lasting for four hours and 56 minutes, marked a significant turning point for the U.S. Space Agency’s fledgling manned space program.

The No. 18 Mercury spacecraft, dubbed Aurora 7 to reflect that Mercury served as a “bright light” for the future (it also happens to be the name of the street where Carpenter grew up), rode the Atlas D booster to orbit and kicked off a mission that was one part research expedition, one part race for survival. During a 1999 interview with Roy Neal, Carpenter spoke a bit about the rationale behind the naming of Aurora 7 :

Well, there’s some popular disagreement about that. I named it Aurora because I saw it as a celestial event, and the aurora borealis is a celestial event. I liked the sound of it and the celestial significance. First of all, let’s go into 7. Al Shepard started that with Freedom 7, and the Press caught that and said, “Isn’t that nice of Al to name his capsule Something 7 in honor of the seven astronauts, his buddies?” And everybody believed that. The fact of that matter is that he named it “7” because it was capsule number 7 off the line. But the people didn’t know that! But since everybody wanted to match Al’s largesse, Gus had Liberty Bell 7 and John had Friendship 7, so I had to do something with “7”, and it was Aurora 7. But the people back home in Boulder, down on the front range, thought, “Wasn’t that nice of Scott to name his capsule Aurora 7 for the fact that he was born and raised in a house in Boulder on the corner of Aurora and Seven Street?” So I give you the real reason behind Aurora, but people from Boulder don’t believe it. By all accounts, the countdown to the liftoff of NASA’s fourth manned mission was, essentially, perfect. A last-minute hold lasting some 45 minutes was initiated at the T-minus 11 minute mark to allow for better camera coverage as well as to allow aircraft to review the atmospheric refraction index in the area around the Cape.

There were some modifications made to the Atlas launch vehicle that was used to send Carpenter aloft. Primarily, these included the retention of the insulation bulkhead as well as reducing the staging time from 131.3 to 130.1 seconds after launch.

After five minutes and one second into the flight both the booster and Aurora 7 performed as advertised – with only one “off-nominal” event noted.

The Abort Sensing and Implementation System (ASIS) hydraulic switch No. 2 moved to the “abort” position some four minutes and 25 seconds into the flight. NASA has also stated that the flight of Aurora 7 encountered the following issues:

Pressure transducer H52P for the sustainer hydraulic accumulator was apparently faulty and showed a gradual decrease in pressure from 2,940 psia to 0 between 190 and 312 seconds after liftoff. Another transducer in the sustainer control circuit indicated that pressure had remained at proper levels so the switch did not actuate until the normal time after SECO. The artistic logo that was placed on the exterior of Carpenter’s craft was painted by Cece Bibby. Photo Credit: NASA / ScottCarpenter.com

Carpenter would spend some three orbits above our world. During that time, he worked to determine the true nature of the “fireflies” that fellow Mercury astronaut John H. Glenn had seen on his mission a little more than three months earlier. It was determined that these were, in fact, ice particles that had broken free of the exterior of the Aurora 7 capsule.

A targeting error meant that both astronaut and spacecraft would splash down an estimated 250 miles (400 km) off target, delaying Carpenter’s recovery. The mission would fuel Carpenter’s interest in science and he went on to participate in the U.S. Navy’s SEALAB program until he eventually resigned from NASA in 1967. Before his departure, he worked with other astronauts to help train them to conduct extra-vehicular activities, or “EVAs”. Carpenter discussed his aquatic efforts during the same 1999 interview: Scott Carpenter is helped into his Aurora 7 spacecraft for the Mercury Atlas 7 mission on May 24, 1962. Photo and Caption Credit: NASA

“Curiosity is a thread that goes through all of my activity. I’ve been curious. I’ve also been frightened by the deep ocean. I wanted, number one, to learn about it; but, number two, I wanted to get rid of what I felt was an unreasoned fear of the deep water. I was also inspired by what [Jacques] Cousteau had done. I saw a use for NASA technology in ocean technology, and first proposed to Cousteau that I come and share technology with his program. He said, ‘Well, we could use your experience, but you don’t speak the right language and we can’t pay you very much. But,’ he said, ‘if you want to share technology with the ocean, do it with your own United States Navy.’ And that’s how it happened,” said Carpenter.

Carpenter’s flight, along with the five other Mercury missions, helped NASA gain the confidence to begin Project Gemini, which then led to the Apollo Program – and humanity’s first steps on another world. Carpenter noted that he was very happy to have lived during a time of exploration – and discovery.

“… I feel I have been a very, very, fortunate man to have lived at the time when so many unknowns can be made knowns; and that’s happened in this century. And that pleases me probably more than anything else, because I think it is fair to say that I have been (and remain) a very curious person. And I’ve had a lot of satisfied curiosity in my time,” said Carpenter.