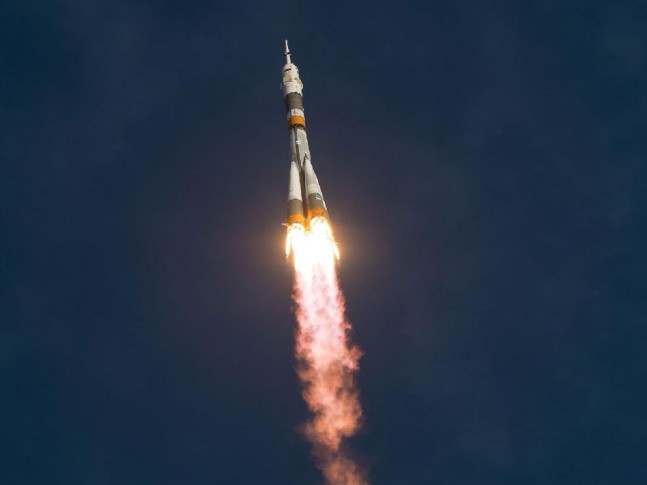 Baikonur Space Center in Kazakhstan, the jewel in the former Soviet Union’s crown – currently leased by Russia – has seen it all. This site, which witnessed the launch of the historic Sputnik 1 mission – the first ever satellite sent to space – as well as Yuri A. Gagarin’s pioneering spaceflight, turned 60 on Tuesday, June 2. This marks a pivotal anniversary since the cosmodrome founding on June 2, 1955. However, despite the age, the world’s first and largest operational spaceport still stands as a vivid remnant of the Space Race of the Cold War – but it shows no signs of getting old.

Mine Me A Missile

Sixty years ago, the leadership of Soviet Union’s Ministry of Defense approved the organizational and staff structure of the 5th Research Test Site, which would later be named “Baikonur”.

The origin of the name “Baikonur” (“rich valley” in Kazakh) is uncertain. Some sources say that it was originally a mining town and the cosmodrome name was chosen to confuse the West because the actual location of the space center was about 196 miles (315 km) northeast from Baikonur in the Dzhezkazgan Desert. Other sources suggest that Baikonur was a name of the Tyuratam region even before the cosmodrome existed.

The choice of Kazakhstan as the location of the spaceport was strategically chosen by a commission heavily influenced by the nation’s military leaders, weapons designers, and rocket engineers. It had to be surrounded by plains, as the radio control system of the rocket required receiving uninterrupted signals from ground stations hundreds of miles away. Additionally, the missile trajectory had to be away from populated areas. It is also an advantage to place a space launch site closer to the equator, as the surface of the Earth has higher rotational speed there.

The first purpose of the Baikonur Cosmodrome was to be a long-range missile center. The USSR wanted to test the world’s first intercontinental ballistic missile – R-7 Semyorka – there.

U-2 photograph of the Tyuratam (Baikonur) launch pad of the R-7 missile. Photo Credit: CIA

The CIA had known about the missile activities at Baikonur since at least August 1957. That year, U-2 high-altitude spy planes captured images of the R-7 missile launch pad. By the 1960s, the existence of Test Range No. 5 at Baikonur was not a secret anymore.

The Soviet engineers envisioned a bigger role for Baikonur than launching ballistic missiles. They dreamed of opening a new chapter in space exploration – sending satellites and people into space.

New roads and rail had to be built to service the space center, as well as a new town that came complete with housing and schools for staff and their children. When the Soviet Union’s main space rocket designer, Sergei Korolev, arrived at the site and saw a new railway track leading from the Tyuratam station into the steppe, he gave an order to start building the launch pad right where the track ended. To this day, those rails are still being used to deliver space rockets to their launch positions.

Baikonur is the spaceport of many spaceflight firsts. The first ever satellite in space – Sputnik 1 – was launched from the cosmodrome on Oct. 4, 1957. Next was Laika the dog, the first animal to orbit the Earth, on Nov. 3, 1957. Finally, the most important of the Soviet spaceflight milestones was achieved on Apr. 12, 1961, when Yuri Gagarin became the first man in space. He was launched aboard his Vostok 1 spacecraft and completed one full orbit of Earth before returning home safely. Baikonur was the site where the Sputnik 1 spacecraft launched from – beginning the Space Age in 1957. Photo Credit: NASA

The presence of Gagarin in Baikonur’s history is still evident. One of the spaceport’s launch pads is named after him and crews of every Soviet and Russian mission since Gagarin’s death in 1968, bring flowers to his grave in Red Square in Moscow before launching to space from the Kazakh cosmodrome.

Other significant Baikonur firsts include the following: the launch of the first spacecraft to travel close to the Moon, Luna 1, on Jan. 2, 1959; the launch of Valentina Tereshkova, the first woman in space, on June 16, 1963; and sending to the International Space Station (ISS) the first space tourist – Dennis Tito, on Apr. 28, 2001. Baikonur was also the spaceport that performed the one and only launch of Buran orbital vehicle similar in appearance to NASA’s Space Shuttle. The lift off took place on Nov. 15, 1988.

In the Soviet era, Baikonur was also the only window to space for East-bloc countries and launched, for example, the first Czechoslovakian (also the first non U.S. or Soviet) and the first Pole to orbit.

Since the retirement of the Space Shuttle Program in 2011, the importance of the cosmodrome is even bigger as Baikonur is now the only launch site for manned missions to the ISS.

The long history of Baikonur is also marked by fatal events that took place before a missile test launch in 1960. On Monday, Oct. 24, a prototype of the R-16 intercontinental ballistic missile was being prepared for a test flight, and an explosion occurred when the second stage engines ignited accidentally, killing over 100 people, mainly military and technical personnel working on the preparations. The explosion cost the lives of numerous of engineers – and of Nedelin himself. Photo Credit: USSR

People near the rocket were instantly incinerated ; those farther away were burned to death or poisoned by the toxic fuel component vapors. Massive explosions continued to rock the launch pad for about 20 seconds, and the subsequent fires lasted for two hours. The blast was reportedly visible as far as 30 miles (50 km) away.

The Nedelin catastrophe, named after Chief Marshal of Artillery Mitrofan Ivanovich Nedelin, who was killed in the explosion, is recognized as the single greatest disaster in the history of rocketry. It is now, and will likely always be, a mystery as to just how extensive was the damage.

Complete secrecy was immediately imposed on the events by Nikita Khrushchev, the leader of USSR. The true casualty list has always remained a mystery. More recent investigations have estimated the death toll as high as 200. The best estimate, however, appears to be around 122 fatalities.

Despite the overall good shape of Baikonur Space Center, changes are needed to maintain the spaceport’s key role in space launches. Meirbek Moldabekov, deputy chairman of the Kazakh Investment and Development Ministry’s aerospace committee (Kazcosmos) stresses the importance of restructuring the cosmodrome.

He noted that after Russia puts into operation its Far Eastern Vostochny cosmodrome, “Russia’s participation in the activities of the Baikonur cosmodrome will decrease significantly.”

“All federal launches will be carried out from Vostochny, so Baikonur can only rely on Kazakh satellite launches and commercial launches. The latter can only take place if Kazakhstan with its strategic partners invests in the Baikonur cosmodrome with a view to maintaining competitive world market prices for launches,” Moldabekov said. Baikonur has been the site of six decades worth of triumphs – and accidents. Photo Credit: Roscosmos

According to him, this task requires a number of measures which “… will possibly result in the cosmodrome restructuring for its preservation and further exploitation of its commercially important small part.” According to Moldabekov, Baikonur in its scope and structure “is comparable to three modern foreign spaceports.”

Meanwhile, the Russian Prime Minister Dmitry Medvedev, when congratulating the Baikonur spaceport staff on the 60th anniversary, has also acknowledged the role of the cosmodrome role in space exploration, hoping it will keep the leading position.

“I am confident that professionalism, modern knowledge and responsible attitude to your work will help you make great achievements and continue space exploration, and Baikonur will be serving mankind for a very long time. I wish you success, good health and all the very best,” Medvedev said.

Since that time, the U.S.S.R. used the location to launch all of its missions from. After the collapse of the Soviet Union in the late 1980s, Russia has leased the site from Kazakhstan, through to 2050 with the site being managed by the the Russian Federal Space Agency and the Russian Aerospace Defence Forces.

Perhaps the word that best sums up the history that the site has – and will likely have for some time to come – was spoken by Gagarin, the first man to leave our world and to travel into the blackness of space on Apr. 12, 1961.

“Poyekhali!” – which translates into English as – “Let’s Go!”