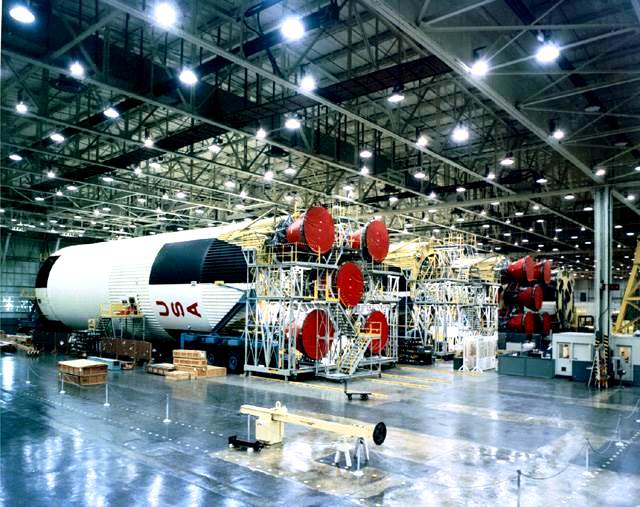 Much like automobiles or aircraft, the stages of NASA's Saturn V rocket had to be inspected and tested. Photo Credit: NASA

Everything we use today that has a motor or engine has to be tested. All the parts are manufactured in different places and then delivered to an assembly plant where they are put together. The two most familiar items are cars and airplanes. However, it was the same with the stages and modules of the massive Saturn V launch vehicle. The stage the team I was a part of was put together in Michoud along with the second stage. Both stages were in need of testing when they were complete and integrated.

The testing site for our stages was the Mississippi Test Site located near Bay St. Louis. There was a test site at Marshall Space Flight Center, as well. Because the configurations were different for each stage, they each had a custom test stand. What was so amazing to us was how the stages were moved around. There were enormous transporters and then they were placed on barges to be shipped through Lake Pontchartrain, Lake Borgne, out to the Gulf, and into the Pearl River to the site. Watching massive pieces of equipment be hoisted around to their various destinations – was always breath-taking. Photo Credit: NASA

Our team gathered and interpreted the data from test firings. The test stands themselves were a marvel of engineering. They are buried in the ground so deep that nothing can destroy them. Well, maybe a meteor strike or a volcano erupting on the Mississippi Gulf Coast. Hurricanes cannot faze them. There are enormous cranes on top of each stand. These are used to grab the top of each stage and haul it out of the barge and mount it in the correct position on the stand. I admired the folks who built the entire Mississippi Test Site, now called the Stennis Test Site.

Sometimes a stage might be on the stand for several days, depending on whether or not there was an issue which needed resolving. It was easier to fix a problem on the stand rather than having to haul these enormous stages back to Michoud. The problems we found were engine fires, premature cutoff of a firing, pressure problems, and other things of this nature. Some were frustrating. We would pinpoint the problem then the details would be sent to other engineering teams. After that the completed and tested stages were put into a huge warehouse to await transport by barge to Kennedy Space Center in Florida where they were assembled with the other stages and modules in the VAB (Vehicle Assembly Building) to complete the Saturn V. When any of the stages were barged to the Cape, they had to go through the Florida Straits (around the peninsula) and then north to the Cape. After every system had been checked and triple checked – it was time to move out to the launch pad. Photo Credit: NASA

We loved everything we did and we were going to the Moon – truly a heady time. My team worked with measuring and telemetry analyzing data from many transducers. They transmit in a range of 0–5 volts. There were over 900 measurements but our team monitored only about 50 or so of them. The data was transmitted in Single Sideband (SS/FM), FM/FM, Pulse Code Modulation (PCM/FM), and Pulse Amplitude Modulation (PAM/FM) from Offset Doppler (ODOP) transducers. All of this was powered by two 25-volt batteries. Some of the things we monitored were: mechanical movements, atmospheric pressure, sound level, temperature, vibrations, fuel flow, and other systems’ performance such as the “tickle factor.” We also checked overall performance.

Despite being one of the few female engineers working on the Apollo Program, no one ever gave me any sort of disrespect or abuse.

The technology we used on Apollo is very different than that which we use today. People are used to high-speed computers and instant data from all over the world. We did not have any of that. The only computer I remember was the 1st Generation of IBM computers–the old 360s. You would not believe how primitive these were. The computers at Michoud were across Lake Ponchatrain in Slidell, La. We as engineers used something far older – slide rulers. They are marvelous. I could instantly find the answer to complicated equations.

Looking back at all we accomplished and how we did it – is nothing short of humbling. I ache for a return of the days when astronauts will walk across the surface of distant worlds, knowing that they do so on the accomplishments of the team I worked with at Michoud.

Sara Howard graduated from Louisiana State University with an Honors Degree in Mathematics and Astronomy in 1965. After graduation, Sara worked for Boeing as an Aerospace Engineer on the first stage (S-IC) of the Saturn V during the Apollo Program. She also worked at the Michoud Assembly Facility from 1965-1967. In 2009, on the 40th Anniversary of Apollo 11, Howard was contacted by the National Air and Space Museum of the Smithsonian for her written history. Sara’s latest book is, “Mischief at Michoud” about her experiences working as a rare woman engineer among the guys. This amazing plant is mostly unknown to the public although it is still in use today.

Thank you very much for this very interesting article and valuable insight Sara. Considering the advances in computers, I understand that the guidance computer aboard the Apollo spacecraft created at MIT was assembled using the LOL system – “Little Old Ladies” who literally wove the memory by hand, with a wire running though a ferrous ring for a “1”, and outside of the ring for a “0”. You can be justifiably proud of your efforts and achievements Sara, and it’s great to see someone who is such a great NASA advocate. Please continue writing, your work is both enjoyable and educational. As do many other readers of Spaceflight Insider, I too look forward to our astronauts once more walking on distant worlds, the sooner the better!

Thank you for your kind review about my work on the S-IC stage of the Saturn V. I am glad that you enjoyed my article. I have been trying to preserve our history of the greatest achievement in human history. Sometimes Apollo seems forgottten and superceded by the Shuttle Program. I hope that people will remember that we were the first.
Thank you again, Karol.
P.S. I put a joke in this chapter and no one has found it yet. 🙂