Our SpaceFlight Heritage: Apollo 15, Hadley–Apennine and the open road 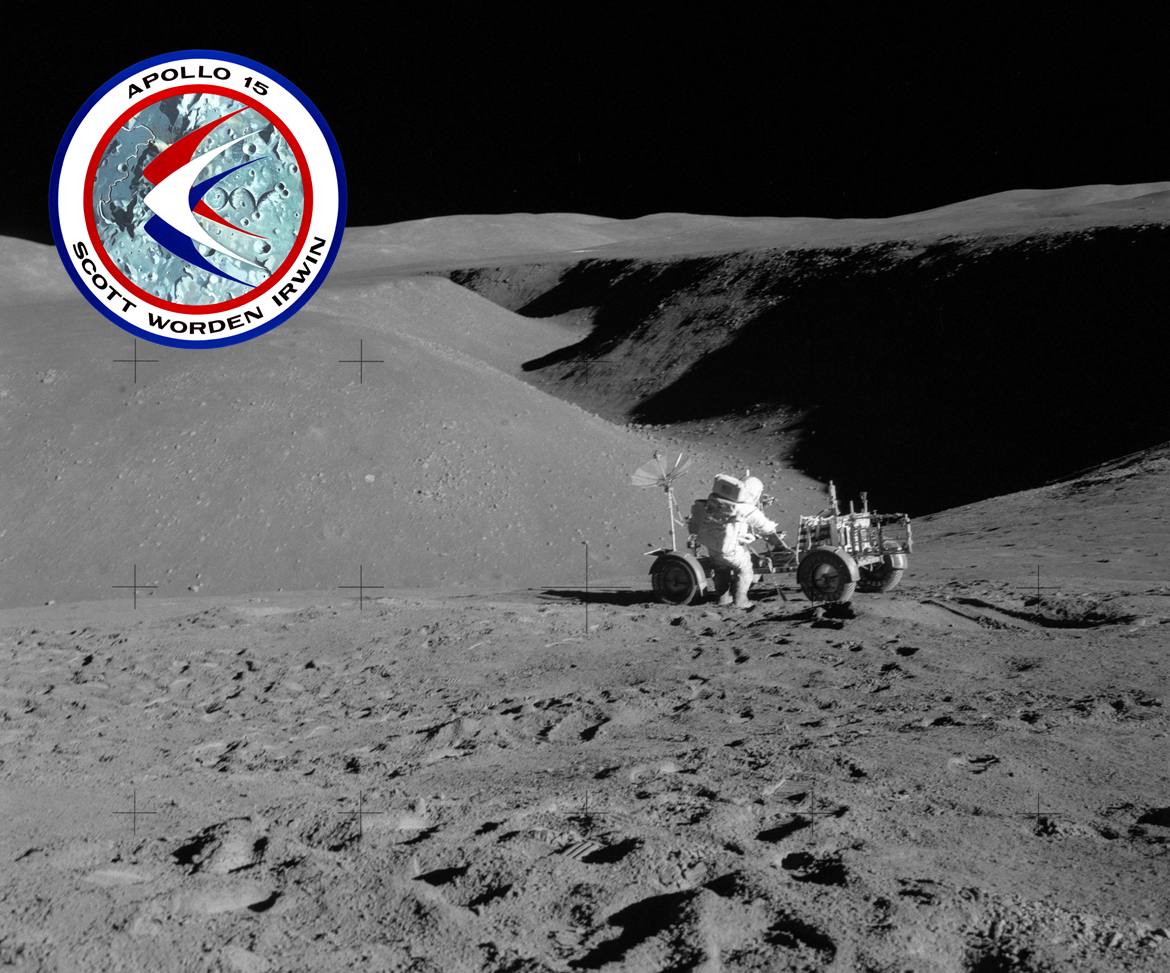 The Apollo 15 mission lifted off from Kennedy Space Center Launch Complex 39A on July 26, 1971. It would mark the first of NASA's "J" missions to the Moon - and see the first use of the Lunar Roving Vehicle. Image Credit: NASA

KENNEDY SPACE CENTER, Fla — It was the Golden Age of manned exploration (and they were all men at that time) of the Solar System. Apollo 15 marked the fourth time that NASA astronauts would walk on the lunar surface. For the three-man crew, their destination would be the Moon’s Hadley-Apennine region, located at Mare Imbrium – the Sea of Rains.

The flight would be called the most successful of the six flights that the U.S. Space Agency carried out under the Apollo Program.

Apollo Command and Service Module 112 (produced by North American Aviation), along with Lunar Module 10 (produced by Grumman) were stacked atop of Saturn V SA-510 on a mission dedicated toward scientific discoveries of how the Moon formed. This marked an overall turning point in the directive of the Apollo Program, one which would culminate with geologist Harrison “Jack” Schmitt flying to the Moon on Apollo 17.

Apollo 15 was indicative of a space agency that had learned to carefully balance risk with crew safety as it pushed outward on bolder and bolder missions to explore. Given that the “successful failure” of Apollo 13 had occurred approximately one year earlier and that NASA had already completed the flight of Apollo 14 – it lent the appearance that NASA was an agency that worked through problems that were encountered – and continued on with its mission. At the time of the flight of Apollo 15, NASA was just beginning to develop an impressive portfolio of experience when it came to conducting crewed operations to the Moon. With the exception of the accident that cancelled the Apollo 13 landing, each of the five manned missions to the Moon (both to orbit and land on the lunar surface) prior to Apollo 15 had been carried out successfully.

The agency had developed and used a methodical step-by-step approach toward landing astronauts on the Moon’s surface. Apollo 10 had sent two astronauts almost to the lunar surface, before they returned. Apollo 11 had landed and conducted about two-and-a-half hours worth of extra-vehicular activity on the Moon. Apollos 12 and 14 had stretched the amount of time and what the pair of Moonwalkers did while on the surface.

Of the crew, only one of them had ever flown in space before, the mission’s commander – David R. Scott. Scott had previously served as the pilot and Command Module Pilot (respectively) for the Gemini 8 and Apollo 9 missions.

Apollo 15 would be his first voyage to the Moon. He, along with Jim Irwin, spent some 18 hours and 35 minutes exploring Hadley Rille and the Apennine Mountains that are positioned at the southeast edge of Mare Imbrium. He also had the privilege of being the leader of the crew that first drove a wheeled vehicle across the dusty lunar regolith.

The Command Module Pilot for Apollo 15 was Alfred M. Worden. Worden was selected to be an astronaut just five years earlier in 1966. For the Apollo 15 mission, Worden would conduct humanity’s first deep space extra-vehicular activity (EVA). During the EVA, he spent some 38 minutes outside of the Endeavour Command and Service Module where he collected film cassettes from the panoramic and mapping cameras and reported on the overall condition of the spacecraft. Worden also bears the distinction, according to the Guinness Book of World Records as the most isolated human being for his time on this mission (Worden was some 2,235 miles away from the nearest human being during his time orbiting the Moon).

Worden, like his crew mates, produced a book about his space-related experiences, entitled: Falling to Earth. The book made the top 12 of the LA Times Bestseller list when it was released in 2012. Apollo 15’s Lunar Module Pilot, James B. Irwin, worked with Scott to carry out the objectives of this first “J” type mission. During their time on the lunar surface, they discovered, retrieved, and brought back to Earth the so-called “Genesis Rock”. This piece of anorthosite rock was given its name primarily because scientists surmise that it was formed during the earliest days of the solar system – some 4.5 billion years ago.

Irwin encountered irregularities in his heart while on EVA on the Moon, something discovered by flight surgeons monitoring both him and Scott. Irwin, a religious man, would reflect on his place in the universe during this mission.

“As we got further and further away, it [the Earth] diminished in size. Finally it shrank to the size of a marble, the most beautiful you can imagine. That beautiful, warm, living object looked so fragile, so delicate, that if you touched it with a finger it would crumble and fall apart. Seeing this has to change a man,” Irwin noted.

All three of the astronauts hailed from the U.S. Air Force, and they had dubbed their Lunar Module Falcon – after the official mascot of their branch of the U.S. military.

The change from an “H” to a “J” type scientific mission was the writing on the wall for what was to come for Project Apollo.

In order to maximize the remaining flights, and given that Apollos 18-20 would be cancelled, NASA opted to “bump up” Apollo 15 to get more out of the flight. The announcement of this change was made on Sept. 2, 1970, and would lay the foundation for the end of the program.

Although one of the three parachutes that allowed the Command Module to safely splash down in the Pacific Ocean did not deploy, this did not prevent a successful conclusion to the mission. As is the case as NASA’s new Orion spacecraft, the Apollo capsule was designed to need only two parachutes to complete the mission – which took place on Aug. 7, 1971. When Apollo 15 splashed down in the Pacific Ocean, it did so with only two of its three parachutes. Photo Credit: NASA

There would be two more flights to the Moon, each of which would push the envelope of what had been done on prior missions. Crewed lunar landings drew to a close in 1972.

Apollo 15 was not without its negative aspects, as is the case with any extraordinary effort of this scale. However, it was the first time that a crew took a ‘car’ with them to another world. It was the first time that, in the void between our homeworld and its primary, natural satellite, a crew member stepped outside the safe confines of his spacecraft. Perhaps most important of all, Apollo 15 was the first time where it could be argued that something other than just completing the mission was the priority of that mission. In this case – science. It was a fact that Scott himself noted while he was on the Moon.

“As I stand out here in the wonders of the unknown at Hadley, I sort of realize there’s a fundamental truth to our nature, Man must explore… and this is exploration at its greatest,” Scott said.

At the time, Scott suggested that he thought the Apollo Program would be just the first steps in humanity’s voyage out into the cosmos.

“When I look at the Moon I do not see a hostile, empty world. I see the radiant body where man has taken his first steps into a frontier that will never end,” Scott said during an interview with National Geographic magazine. Scott and Irwin used the first of three Lunar Rovers that have been sent to the Moon so far during Apollo 15. Photo Credit: David Scott / NASA