Our Spaceflight Heritage: 50 years of EVA, Alexei Leonov steps into the black 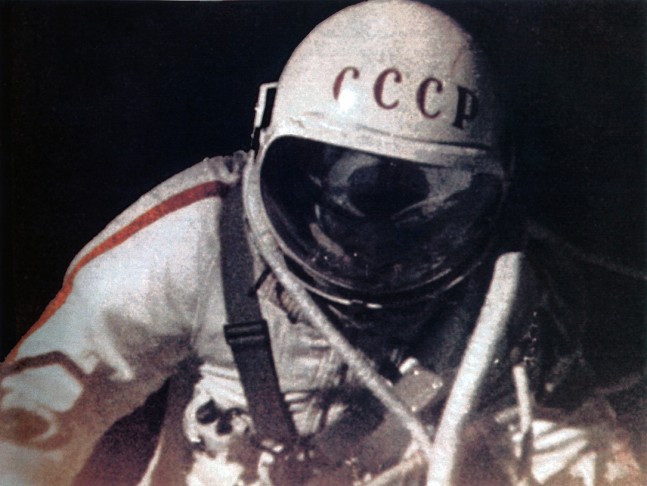 Fifty years ago today, March 18, the first person in human history conducted an extra-vehicular activity (EVA) which took him outside the safe confines of their spacecraft. Alexei Leonov, a cosmonaut with the former Soviet Union, achieved this milestone in human history when he exited his Voskhod spacecraft. The feat occurred during a time when the race to the Moon between the US and USSR was in full swing and marked one of the last “firsts” the Soviet Union would accomplish before the US took the lead in the Space Race.

Leonov was the pilot on this mission with Pavel Belyayev serving as commander. Восход-2 (Voskhod-2 ) lifted off on a day-long mission aboard their Voskhod-3KD  (Sunrise) spacecraft with the call-sign of Almaz (Diamond) on Thursday, March 18, 1965. Then, after their first orbit, 90 minutes into the flight, Leonov exited an inflatable airlock attached to the duo’s spacecraft to begin his 12 minute 9-second long spacewalk. He was tethered to the airlock by a 5.5-meter long umbilical cable that prevented him from floating off into space.

Interestingly, the Voskhod’s avionics were based on vacuum tube technology and required cooling by cabin air to prevent overheating. Hence an airlock was needed for Leonov to exit and re-enter the cabin while it remained fully pressurized. By contrast, the solid state avionics on the US Gemini spacecraft did not require air cooling; therefore, the spacewalking astronaut could exit and re-enter the depressurized cabin through an open hatch. A model of the Voskhod-2 spacecraft with spacewalker Alexei Leonov. Photo Credit: CollectSpace

Shortly after Leonov began his EVA, he noticed that his suit had over inflated. This turn of events would prevent him from re-entering the airlock and getting safely back into the capsule when his activities outside the spacecraft concluded. So he was forced to bleed off some of the suit’s overpressure, in order to be able to bend at the elbow and knee joints. This bleeding off of pressure caused him to go below allowable safety margins – a fact Leonov did not report to his Mission Control. Soviet state radio and television had stopped their live broadcast earlier when the mission experienced some difficulties.

It would be nearly four years before the Soviets tried another EVA. The Soviets completely misrepresented to the press how difficult Leonov found it to work in space and concealed the problems until after the Cold War had ended.

There have now been a total of 376 EVAs conducted worldwide (including 14 on the surface of the Moon by the US Apollo astronauts) since the initial EVA by Leono.

NASA is recognizing 50 years of EVA this year, in addition to Leonov’s first EVA is the June 3 EVA of US astronaut Ed White who conducted the first US EVA on Gemini 4. White used a hand-held jet gun to push himself during his 23-minute tethered spacewalk. NASA held an internal contest to design a patch symbolizing these milestones. Artist Blake Dumesnil submitted the winning design.

Very interesting. Never knew they used an airlock, let alone an inflatable one. I had always presumed they just opened the hatch as Gemini did.

Belyayev and Leonov also had a hair-raising re-entry, landing and eventual rescue after spending two days in unbelievable winter conditions. Leonov was also slated to be the first cosmonaut to walk on the moon but the Soviet lunar program suffered from competing “bureaus,” lack of sufficient funds and a moon booster (N-1) that failed in four launch attempts – all unmanned.

Hi Tom,
Yes, you are correct about their recovery ordeal and the later failed N-1 attempts. Good thing we had von Braun’s Saturn V team at NASA Marshall in Huntsville, Alabama.