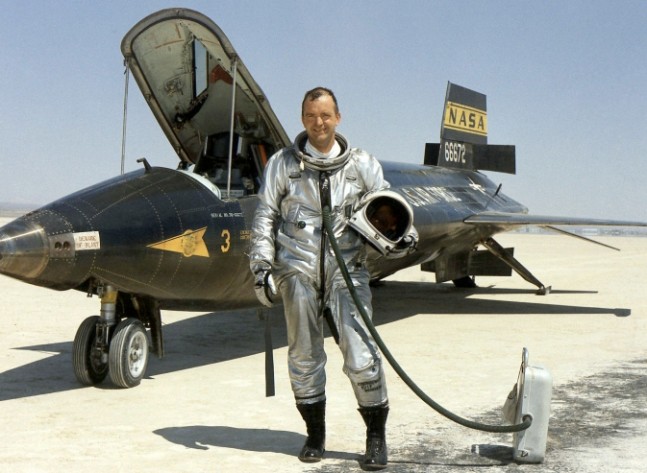 NASA test pilot and aerospace engineer Bill Dana died on Tuesday, May 6 at the age of 83 following a lengthy illness.  Dana served at NASA for nearly 40 years before retiring in 1998. During his distinguished and extensive career, Dana flew over 8,000 hours in more than 60 different types of aircraft ranging from helicopters and sailplanes to the rocket-powered X-15.  Dana conducted test flights on a number of specialized or modified research aircraft at NASA’s Fight Research Center, later named for Hugh L. Dryden and recently renamed NASA Armstrong Flight Center.

Bill Dana was born in Pasadena, California, on November 3, 1930 and raised in Bakersfield, California.  After Graduating from the United States Military Academy at West point Dana served for four years in the Air Force.  He was hired by NASA as an aeronautical research engineer on October 1, 1958, the same day the agency was established. His early assignments included developing a rudimentary simulator for the X-15 and stability and control research for the F-107A fighter prototype. In September 1959, Dana transferred to the Flight Operations Branch as a Research pilot. He was probably best known for his work as a project pilot on the rocket-powered X-15  research aircraft. He flew the hypersonic vehicle 16 times, reaching a top speed of Mach 5.53 (3,897 mph and a peak altitude of 307,000 feet (over 58 miles high). Dana flew 199th and last X-15 mission on October 24, 1968.  Dana was awarded with astronaut’s wings in 2005 for his two highest X-15 flights.

After the X-15 program, Dana worked on NASA’s lifting bodies program, flying the HL-10, M2-F3 and x-24B aircraft. The lifting bodies research confirmed engineers assertions that such aircraft could be precisely controlled during approach and landing and provided NASA with much needed data for designing the Space Shuttle Orbiter. Bill Dana made the last powered flight of the lifting bodies program in the X-24B on September 23, 1975. NASA research pilot Bill Dana takes a moment to watch NASA’s NB-52B cruise overhead after a research flight in the HL-10 in this photo from November 30, 1968.
Photo Credit: NASA
NASA

Dana flew hundreds of research hours in advanced fighter jets including the  F-14, F-15, F-16, and YF-12. He also did a guest pilot evaluation of the forward-swept-wing X-29 and flew the experimental F-18 High Alpha Research Vehicle, the first aircraft to use multi-axis thrust vectoring for vehicle control. In 1986 Dana was appointed chief pilot with responsibility for recruiting, developing and training the center’s cadre of test pilots.

In 1993, Dana retired from flying to become the center’s chief engineer, overseeing all of the center’s research projects.  He held this position until his retirement from NASA in May 1998.  He returned to the center seven months later as a contractor with Analytical Services and Materials, Inc., to write histories of research programs and to evaluate lessons learned. During a period of budget cuts,  he gave up his salary and continued to work as a volunteer with the History Office.