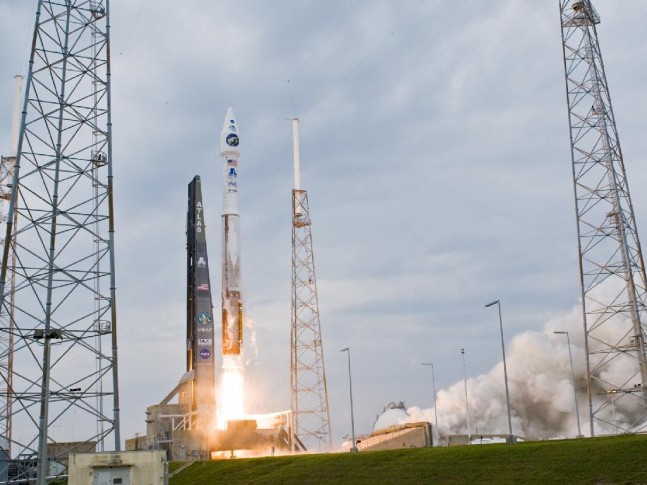 Fire and smoke signal the liftoff of the Atlas V/Centaur carrying NASA's Lunar Reconnaissance Orbiter and Lunar Crater Observation and Sensing Satellite on their missions to the moon. Photo credit: Tom Farrar/Kevin O'Connell/NASA

On June 18, 2009 at 5:32 p.m. EDT, a United Launch Alliance (ULA) Atlas V rocket roared off the launch pad at Launch Complex 41. In so doing, it signaled the start of the Lunar Reconnaissance Orbiter (LRO) and Lunar Crater Observation and Sensing Satellite (LCROSS)  missions to the Moon. The LRO and LCROSS spacecrafts were tucked inside the payload fairing at the top of the rocket to shield them from atmospheric friction as the launch vehicle climbed toward space. The fairing separated as planned and LRO pushed away from LCROSS and the Centaur stage on its way to orbiting the Moon. LCROSS consists of a shepherding satellite and the attached spent Centaur upper stage. The mission objective is to send the Centaur upper stage into a lunar crater near the south pole of the Moon and observe the impact to look for signs of water in the debris plume. The mission successfully uncovered water on October 9, 2009 which impacted into the permanently shadowed region of Cabeus crater near the Moon’s south pole. LRO’s scientific instruments include the following:

CRaTER– The Cosmic Ray Telescope for the Effects of Radiation characterizes the lunar radiation environment and determine its potential biological impacts. CRaTER also tests models of radiation effects and shielding, which may enable the development of protective technologies. LAMP– The Lyman Alpha Mapping Project maps the entire lunar surface in the far ultraviolet. LAMP also searches for surface ice and frost in the polar regions and provide images of permanently shadowed regions illuminated only by starlight. LRO and LCROSS are placed into the protective payload fairing at the Astrotech facilities in Titusville, Florida. Photo Credit: Jack Pfaller / NASA

LRO is scheduled for a one-year exploration mission at a polar orbit of about 31 miles, or 50 kilometers, the closest any spacecraft has orbited the moon. Its primary objective is to conduct investigations to enable a human return to the moon.