John Houbolt, the man who made the Moonlandings possible, dead at 95 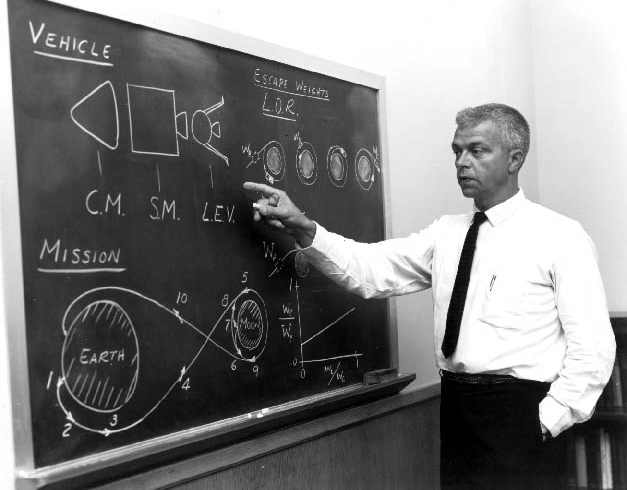 John Houbolt, the chief promoter of the lunar rendezvous approach for landing crews on the Moon has dies - he was 95. Photo Credit: NASA

Recently, as the world turned its attention to the launching of a rocket into low-Earth-orbit – a man who’s determination allowed men to set foot on the Moon faded quietly into history. John Cornelius Houbolt, passed away on April 15, 2014 – he was 95. His work during the “Space Race” was as insightful as it was determined and it is that drive which allowed the United States to beat the former Soviet Union in the race the the Moon.

Houbolt was an aerospace engineer who championed lunar orbit rendezvous (LOR). This might not seem like much, but, at that point, NASA was planning on launching a huge rocket which would touch down on the surface of the Moon and then reignite its engine which would lift the entire booster off the Moon. A concept that was fraught with peril.

Houbolt doggedly proposed that, instead, a two-part spacecraft be sent into lunar orbit, where one half, one built exclusively for the unique conditions on the Moon would then detach and land. Houbolt pursued NASA Associate Administrator Robert Seamans and declared that he knew this was a more rational approach, one far more likely to succeed especially considering the ever-present concern (at least among engineers) of weight.

In his letter to Seamans he stated that he felt very much like a “voice in the wilderness.” Seamans, expressed the notion in the TV series “Moon Machines.” That he wanted to get Houbolt off his back. In a manner of speaking Seamans got his wish – when Wermer vin Braun endorsed Houbolt’s LOR proposal in 1961 – it was selected as the path forward for the Apollo Program the following year.

Houbolt’s LOR proposal is widely credited with achieving the goal of landing men on the Moon and returning them safely to Earth by the end of the decade (twice actually) under President John F. Kennedy’s goal. It also has been stated that by taking Houbolt’s approach saved precious time and millions, if not billions of dollars.