Looking back as Intelsat 603 mission ends in satellite “graveyard” 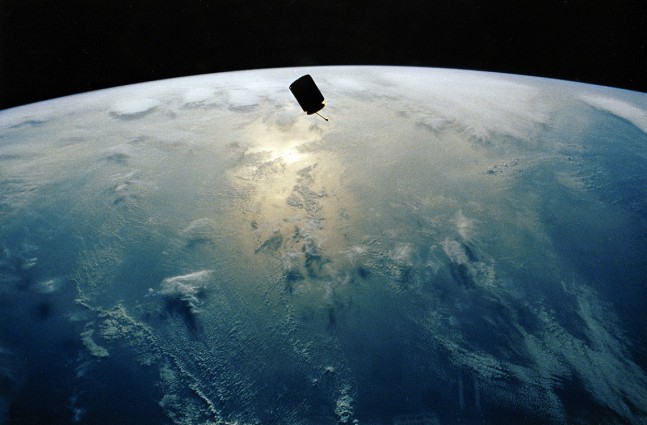 Intelsat 603 has officially reached its end. For 23 years, the Intelsat 603 satellite, or IS-603, relayed telephone calls using HS-376-type transponders which could relay an estimated 120,000 telephone calls at the same time. In January of 2013, the satellite was deactivated and was removed from geostationary orbit (GEO), but it was another two years before it was finally shut off.

On Jan. 23 of this year, the final command in a sequence to “deorbit” the craft was sent to IS-603, which in this context means pushing it upward into a graveyard orbit more than 200 kilometers above geostationary. In February of 2015, Intelsat confirmed that the satellite had indeed been deorbited. Though it had been monitored up to that point, it was turned off when it reached its final resting place. With that, a legacy of more than two decades of service drew to a close.

IS-603 was the second of five Intelsat VI satellites to be launched. Like the Leasat series that came before it, the Intelsat VI series used a HS-393 bus, a “taller” version of the HS-381. The HS-393 was designed for the width of the space shuttle payload bay, but because of the Challenger disaster in 1986, Intelsat 603 was launched not with a shuttle, but on a commercial Titan III rocket (CT3) from Cape Canaveral Air Force Station’s Space Launch Complex 40 (SLC-40), currently used by SpaceX to launch its Falcon 9 rockets.

It was only the second launch of a CT3, and it did not go well. The deployment system was incorrectly wired, so the satellite did not separate from the booster’s upper stage. It separated from its perigee-kick motor and used its own thrusters to reach low-Earth orbit (LEO), but since it had been designed for Geosynchronous Orbit (GSO), it was useless. The first flight of the Space Shuttle Endeavour, STS-49, in May of 1992, was tasked to rescue Intelsat 603. The problem was twofold: the satellite was huge—over nine feet (2.8 meters)—and it was rotating. So a way had to be devised to capture the giant spinning top.

So, Thuot stood on the end of the robotic arm while Commander Dan Brandenstein maneuvered Endeavour to within about six feet (1.82 meters) from the rotating satellite. Thuot, Tom Akers, and Rick Hieb grabbed the spacecraft and held it while the liquid propellant lost its spin. The trio then carefully let go while Hieb attached the bar. Then, with Akers acting as an anchor, Thuot maneuvered underneath and attached bolts to complete the attachment. Akers let go, and Bruce Melnick used the robotic arm to bring the satellite to the motor that would boost it to GSO. The image of astronauts grabbing the giant, spinning satellite is one of the most striking in the 30-year history of the Space Shuttle Program. When Kathy Thornton sent the command to eject the Intelsat 603 satellite from its cradle, nothing happened at first, but fortunately the backup circuit worked. The motor activated and the communications satellite set off for GSO.

Now that Intelsat 603’s day is over, Intelsat’s next generation satellite is Intelsat Epic, which utilizes C-, Ku-, and Ka-bands, wide beams, spot beams, and frequency reuse technology to power Internet connectivity throughout the world at a rate of 25-60 gigabits per second. However, it is unlikely that this new spacecraft would have been as successful without the lessons learned on STS-49.

I really don’t think that Intelsat 603 ended with a “…fiery reentry into Earth’s atmosphere…”. Satellites in geostationary orbit are deorbited by using a small amount of remaining propellant to raise the orbit ~ 200 miles above geostationary orbit. There would never be enough propellant left to execute re-entry maneuvers.

Very much noted, and it has been taken care of. Thank you.