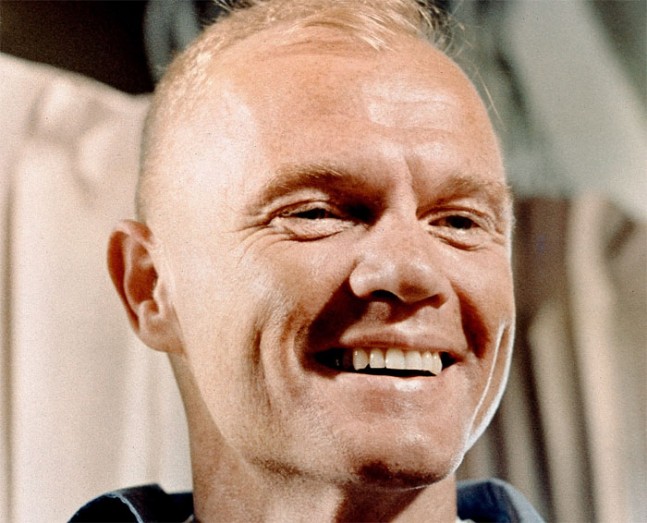 Today we celebrate Mercury Astronaut John Glenn's voyage into space on Friendship 7, as the first American to orbit the Earth. Photo Credit: NASA

On February 20, 1962, John Glenn boarded the Mercury Program’s Friendship 7 spacecraft to become the first American to orbit the Earth. To commemorate the 52nd anniversary of that event, The Spaceflight Group’s Social Media Director, Stacey Severn, shares her blog article about a memorable interview with Senator Glenn in New York City last spring

I was recently lucky enough to attend The Explorers Club Annual Dinner weekend in New York City, which proved to be one surprise after another. Through the club’s “Exploring Legends” interview series, we were treated to an intimate first-hand history of the early space program through the eyes of John Glenn and Scott Carpenter, the last two remaining Mercury astronauts. This blog post will give you a front row seat to interviewer and adventurer Jim Clash’s insightful conversation with John Glenn, which took place in a packed ballroom at New York’s Waldorf Astoria Hotel. Clash knows Glenn well; he interviewed the senator in his recent book, “The Right Stuff: Interviews with Icons of the 1960s.”

I first saw Senator Glenn and his wife, Annie, as they arrived outside the ballroom and stopped to chat with Mt. Everest climber Jim Whittaker (the subject of an “Exploring Legends” interview just two nights before).  Senator and Mrs. Glenn then entered the back of the ballroom for the program, stopping numerous times as they made their way to the front, posing for pictures, shaking hands, signing autographs, and smiling. The picture below is one I snapped of the Glenns when they first entered the room, where they stopped to greet Scott Carpenter and his wife Patty. It was great to see these lifelong friends together, and to witness beautiful moments between the two over the course of the day. Senator Glenn had such a kindness about him, and his aura and carriage were, well, senatorial! He is warm, eloquent, younger at age 91 than many people I know who are half his age, and has a great sense of humor. He read us the following excerpt from a letter from a child who wrote a report about him, which left the audience laughing:

“I’m glad you’re still alive because a lot of my classmates’ biographical choices are already dead. I hope you write back.”

Glenn smiled and said, “That kid got the fastest reply ever.” The audience roared.

Clash’s interview questions and Senator Glenn’s responses gave us a good feel for the Mercury era, capturing the excitement and uncertainty of the time. Although Glenn wanted to fly other missions after becoming the first American to orbit the earth, he was never put back on rotation. Years later, a biography of President Kennedy revealed that Kennedy passed word to NASA that Glenn would not be used again. It’s been speculated that Kennedy did not want to risk the life of a national hero by sending Glenn back up into space. Senator Glenn ultimately realized his desire to return to space in 1998, as a member of the STS-95 crew aboard Space Shuttle Discovery.

Glenn’s pioneering orbital flight in the Mercury program came at a time when America’s rockets were still exploding on the launch pad. His quick-witted response to the question about how it feels when you’re getting ready to launch was, “How would you feel if you’re about to blast off sitting atop two million parts all built by the lowest bidder on a government contract?”

Asked about the differences between his Shuttle flight and his early Mercury mission, Glenn talked about how in the early 1960s we had no experience to fall back on; rocketry and space travel was all new territory. As we were learning, there were concerns about how the body would react to prolonged weightlessness. Would the eyes change shape? Would weightlessness affect the inner ear, and ultimately affect vision? There was actually a small eye chart on the control panel of the spacecraft, which Glenn had to read every 20 minutes. Concerns and unknowns included how the digestive tract would work in space, and Glenn related a story about how as kids he and his friends would try to swallow uphill. By the way, he told us it can’t be done!

Glenn talked about gazing back at the curvature of the earth from space, and how the colors of the spectrum looked during the frequent sunsets and sunrises. In space, for a few seconds when the sun is going down, the earth’s atmosphere breaks up the light spectacularly, revealing a “very different luminosity” than we see on earth, which Scott Carpenter described after his flight as “a campfire.” Glenn said the colors are something that can’t be described or captured – but something very special that has to be seen. He also talked about viewing the earth’s atmosphere from space, and how apparent it is that we (mankind) had better be careful, because that very fragile film of air is all we have protecting our planet.

There was also an odd sight outside the window during Glenn’s Mercury flight aboard Friendship 7. At the first sunrise, he glanced out and saw thousands of particles outside the spacecraft, with a glowing, luminous color reminiscent of fireflies. It was rather surprising, so he reported it. Scott Carpenter saw the same thing on the next flight as well. It was decided that these “fireflies” were moisture particles from the heat exchanger. Nobody ever figured out why the color was so luminous, and that part remains a mystery. By the way, if the Mercury spacecraft followed its original design, it would have had no window at all – and the fireflies, sunsets, and fragile atmosphere would not have been seen!

Senator Glenn was very vocal about his dissatisfaction with the cancellation of the Shuttle program, and talked about the irony that the U.S. has to depend upon its cold war foes for transportation to the ISS. The focus of the space program has changed from the early Mercury days, shifting from the Cold War and competition to research, and he sees the research being done on the ISS as an immense value to all humankind.

The Glenns are passionate about education, and are actively involved in the John Glenn School of Public Affairs at Ohio State University. Their mission is to inspire citizenship and adult leadership, and to improve the level of education in the United States.

When his gracious manner was mentioned, Glenn said he doesn’t feel very humble. “I go along with Benjamin Franklin’s statement. ‘Humility is a great thing. If I was humble, I’d be so proud of it, I wouldn’t be humble anymore.’” About exploration, Glenn said: “To explore is curiosity in action…If you’re a curious person, you’re curious not only about the geographic exploration (looking at the macro), but you’re also curious about the micro, which is laboratory, medicine, food, curing….exploration goes in both directions…the basis of the whole thing (exploration) is that you’re exercising curiosity about the world around us and what we can do about it.”

Just a few hours later, Glenn and Carpenter were introduced on- stage by parachute/balloon icon Col. Joe Kittinger, to receive The Explorers Club Legendary Explorer Medal from Explorers Club president Alan Nichols to thunderous applause by a capacity crowd. I thank them for their curiosity and courage, and feel so fortunate to have met these great men!

This article  appeared on Star Talk Radio and can be viewed here: John Glenn

John Glenn – a true giant and pioneer in manned spaceflight.

What a fantastic read and pictures. Thank you so much for sharing and I hope to meet you sometime. John