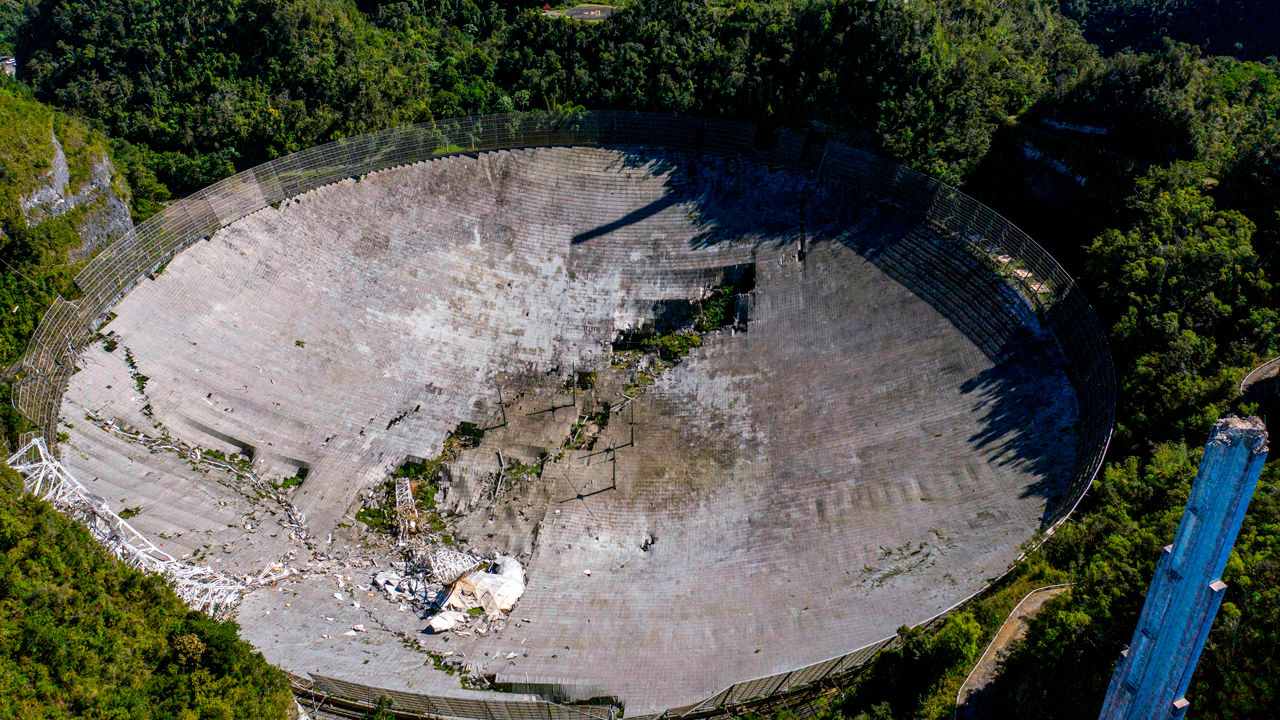 This aerial view shows the damaged Arecibo Observatory after its instrument platform collapsed onto its reflector dish in Arecibo, Puerto Rico, on December 1, 2020. The radio telescope, which once starred in a James Bond film, collapsed Tuesday when its 900-ton receiver platform fell 450 feet (140 meters) and smashed onto the radio dish below. Photo Credit: Ricardo ARDUENGO / AFP via Getty Images.

The Arecibo Observatory in Puerto Rico, a world-famous 1,000-foot-wide radio telescope through which major discoveries in astronomy and astrophysics were made, collapsed on the morning of Tuesday, Dec. 1, after one of its main cables broke on Nov. 6.

That cable’s collapse occurred three months after the telescope’s reflector dish was damaged in August of this year when an auxiliary cable slid out of its socket in one of the observatory’s towers, leaving the dish with a 100-foot gash and causing the collapse of other cables when it fell.

An engineering team was in the process of determining the cause of the first cable break and working out a repair plan when the second cable, this time a main one, collapsed onto the dish, further damaging both it and other cables.

Following the second accident, the National Science Foundation (NSF), which owns Arecibo, determined that repairing the telescope could cause further catastrophic collapse that posed a threat to the lives of the technicians who would be doing the work.

In a bid to save the telescope, supporters, including Puerto Rico’s Congressional representative Jenniffer Gonzalez, organized a formal petition to the White House asking the federal government to send the Army Corps of Engineers to evaluate whether Arecibo could be stabilized and ultimately repaired.

No injuries resulted from the collapse.

Arecibo opened in 1963 after three years of construction. Over 57 years, it has been one of the most productive telescopes in both the number and scope of discoveries made using it. The observatory has been used to study a wide range of fields in astronomy and astrophysics ranging from pulsars to near-Earth asteroids to fast radio bursts.

Just one year after Arecibo opened, a research team led by Gordon Pettingill used the telescope to determine that Mercury’s rotation period is 59 days rather than the 88 days previously believed. 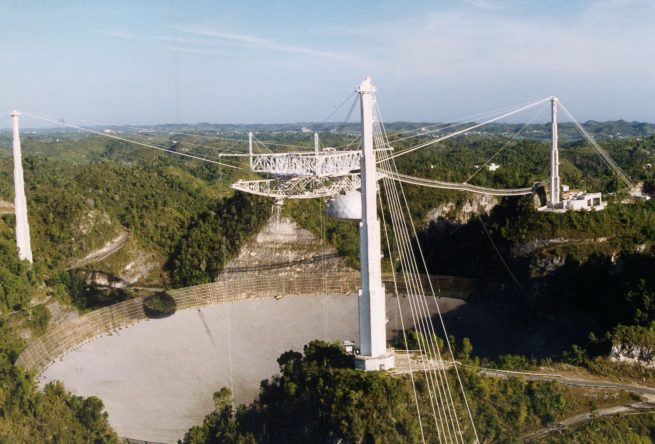 The first exoplanet ever discovered was found with Arecibo in 1992. One year later, scientists Russell Hulse and Joseph Taylor used the observatory to find the first evidence of gravitational waves, a phenomenon predicted by Einstein’s theory of general relativity, by studying a binary pulsar system, earning them that year’s Nobel Prize in Physics.

In an attempt to communicate with any existing extra-terrestrial civilizations, scientists in 1974 used Arecibo to send an interstellar radio message.

A major tourist attraction, Arecibo received thousands of visitors every year and actively took part in public outreach and science education, motivating many to pursue careers in engineering and astronomy.

Arecibo was also a popular culture icon, having been featured in the 1995 James Bond film GoldenEye and in the 1997 film Contact. The latter was based on a novel by Carl Sagan.

Since 2018, Arecibo has been managed for the NSF by the University of Central Florida (UCF). It is currently in the third year of a five-year $20.15 million grant.

During its 57 years of operation, Arecibo was damaged on several occasions, often by earthquakes and hurricanes. In 2014, an earthquake damaged another of its main cables, which was subsequently repaired. In 2017, Hurricane Maria damaged both the dish and one of the antennas.

Several earthquakes hit Puerto Rico in January of this year, causing the observatory to close for several days.

Repairs of damage from Hurricane Maria were still underway when the auxiliary cable broke in August 2020, possibly due to damage from Tropical Storm Isaias, which had just passed over Puerto Rico.

Since the main cable collapse last month, satellite images have revealed the telescope to be more damaged than previously thought. Photos commissioned by the journal Nature show the dish to be broken in half, with large gouges in its central area.

The main cable was found to have broken at 60 percent of what should have been its minimum breaking strength during good weather, indicating the observatory’s cables were weaker than previously thought, due to degradation over time. Using drones, engineers discovered more wire breaks in several major cables. 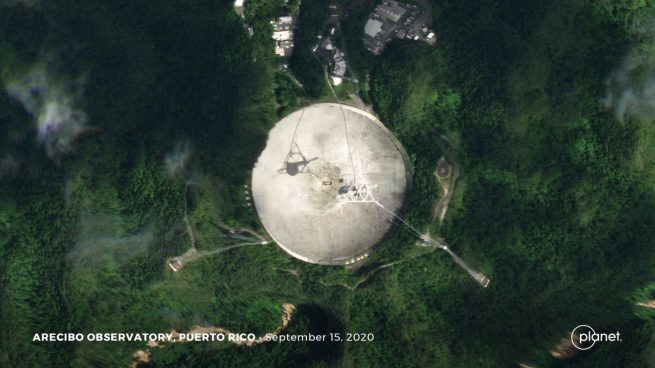 “According to engineering assessments, even attempts of stabilization or testing the cables could result in accelerating the catastrophic failure. Engineers cannot tell us the safety margin of the structure, but they have advised NSF that the structure will collapse in the near future on its own,” said Ralph Gaume, director of the NSF‘s astronomy division.

Plans had been underway to upgrade one of the observatory’s antennas to increase its sensitivity. These were subsequently suspended when the NSF decided to conduct the controlled demolition.

Losing Arecibo is a major blow to astronomers and astrophysicists worldwide. While some of the science done there can be transferred to other observatories, other projects can be done only with its unique instruments.

Other, smaller parts of the observatory, such as two lidar instruments that study the atmosphere by firing lasers into it, will not be destroyed. The NSF hoped to preserve the visitors’ center as well as other buildings on the site, but the fates of those are unclear following the latest collapse.

The NSF emphasizes safety as its top priority and says it is interested in helping the scientific community in the wake of Arecibo‘s loss as well as continuing its strong working relationship with Puerto Rico.

“Top priorities are maintaining safety at the site, conducting a complete damage assessment as quickly as possible, and taking action to contain and mitigate any environmental damage caused by the structure or its materials, the NSF statement said.

“While the telescope was a key part of the facility, the observatory has other scientific and educational infrastructure that NSF will work with stakeholders to bring back online.”

Ashley Zauderer, Arecibo program director, praised the community of researchers and workers who repeatedly came together to make sure work at the site continued in the wake of the earthquakes, hurricanes, and the COVID pandemic.

“There’s an incredibly diverse and amazing group of scientists and dedicated staff and engineers at the observatory, and I mean, I think it is their passion to continue to explore, to learn, and that is the true heart and soul of Arecibo,” she said.