Our SpaceFlight Heritage: Celebrating the anniversary of another comet first – the Stardust spacecraft 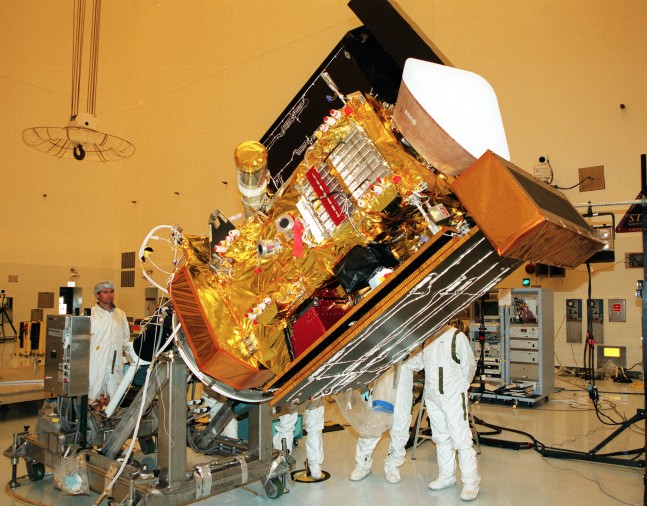 View of the Stardust spacecraft prior to launch. Photo Credit: NASA/JPL-Caltech

A worldwide comet frenzy has been going on for the past few months. After reaching comet 67P/Churyumov–Gerasimenko, Rosetta successfully deployed the Philae lander on November 12, 2014. This month, the comet Lovejoy makes its grand appearance close to the constellation Orion. Discovered by amateur astronomer Terry Lovejoy, the comet should spectacular sight for astronomers and star enthusiasts everywhere. This week also marks the anniversary of an incredible moment in comet history as the Stardust spacecraft intercepted and collected the first samples of comet material for study back on Earth in 2004.

“We found very high-temperature minerals, which supports a particular model where strong bipolar gas jets coming out of the early Sun propelled material formed near to the Sun outward to the outer reaches of the solar system,” said Michael Zolensky, NASA cosmic mineralogist and Stardust co-investigator. “It seems that comets are not composed entirely of volatile rich materials but rather are a mixture of materials formed at all temperature ranges, at places very near the early Sun and at places very remote from it.” A view of comet Lovejoy. This comet should be visible for the next couple weeks and can be seen close to the big dipper. Image Credit: Damian Peach/NASA/APOD

The Stardust spacecraft was launched on Feb. 7, 1999 with the intent of intercepting comet Wild 2. Stardust was programmed to fly ahead of the comet, letting Wild2 overtake the probe as they traveled around the sun. Once in position, Stardust deployed a sample collection plate made of an incredibly light and porous material called Aerogel. As this sample plate was exposed the coma of Wild 2, particles from the comet embedded themselves in the Aerogel for safe storage. As with most spacecraft, Stardust was given an extended mission and was directed to intercept the comet Tempel 1. The NExT (New Exploration of Tempel 1) was designed to take a follow-up look at Tempel 1 after the Deep Impact mission. The probe took a total of 72 images during the flyby. Nearly out of fuel and no further objects to readily observe, on March 24, 2011 Mission Control ordered Stardust to use its remaining fuel and shut down the transmitter.

Today, NASA is still studying the materials gathered by the Stardust sample mission. Seven research papers have been published and a better understanding of our place in the universe has been brought to light.

Unlike most space probes such as Galileo or Cassini, Stardust did not analyze the samples directly. Instead the sample collection plate was stored in a return capsule and launched back to Earth. Those samples were recovered intact on Jan. 16, 2006. Once they were safely on the ground, NASA scientists opened the container is a special clean room designed to avoid contamination from Earth materials. The samples contained a wide assortment of organic compounds, numerous hydrocarbons and crystalline silicates. later analysis performed in 2011 also found evidence of liquid water was present at some time in the comet’s past.

Since its return to Earth in 2006, scientists have been busy analyzing the Stardust samples. Among the samples collected, are what appears to be seven rare, microscopic interstellar dust particles. These dust particles date back to the beginnings of our solar system, and if confirmed, would be the first samples of contemporary interstellar dust. Researcher in the clean room with the samples collected by the Stardust spacecraft. Photo Credit: NASA

Scientists were surprised to discover that the particles were more diverse in composition and structure than originally predicted. Different sized particles having varying differences and histories. The majority of the larger particles were said to have fluffy structures, much like snowflakes. More testing is required before scientists can definitely say if these particles come from interstellar space or not. If they do, they can tell us about the origin and how interstellar dust evolves.

“Comets are believed to have brought water and organic matter to the early Earth, and it is important to understand the nature of these materials because they are necessary ingredients for the origin of life,” said Lindsay Keller, NASA scientist at JSC and Stardust co-investigator. “One of the first analyses we obtained on the samples showed abundant hydrocarbons in many of the particles.”

More potential particles are expected to be discovered as the scientists continue the daunting task of analyzing Stardust’s return package.

The accomplishments of NASA’s Stardust mission were truly historic. The same aerogel-based technology that Stardust pioneered to gather samples of comet dust could also be employed for relatively inexpensive sample return missions to planetary rings, the plumes of Enceladus, the volcanoes of Io, the polar plumes of Europa (if they prove to exist) or a range of other interesting targets.