Our Spaceflight Heritage: Roving on the lunar surface with Apollo 15 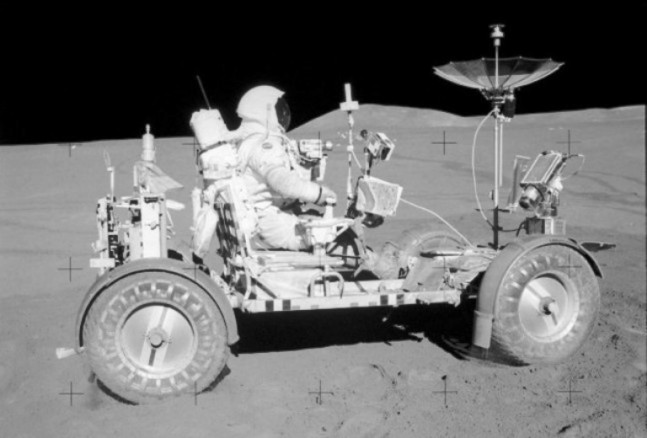 On July 31, 1971, Apollo 15 astronauts Dave Scott and Jim Irwin became the first to use the Lunar Roving Vehicle (LRV), traveling more that 17 miles on the surface of the Moon. LRV was a four-wheeled, manually controlled, electrically powered vehicle that carried the crew and their equipment over the lunar surface. Apollo 15 was the first of the longer expeditions to the moon, where we actually began to explore the terrain in some detail. The primary objectives assigned to the Apollo 15 mission were as follows: Because of the variety of surface features, the Hadley-Apennine landing site permitted extensive geological exploration.

During the approximately 67 hours on the Moon, the crew conducted a 33-minute stand-up extravehicular activity (EVA) in the upper hatch of the of the lunar module as well as three EVAs totaling about 18.5 hours on the lunar surface.

Improvements to the Portable Life Support System used with their space suits allowed the crew to perform longer EVAs (up to 7.5 hours) than was possible on earlier missions. Apollo 15 was the last mission on which a contingency sample was collected. The sampling consisted of seven samples taken approximately 12 meters west of the lunar module footpad.

The site is a small flat area between two subdued 1-meter-diameter craters. This sample was collected to ensure that some lunar material would be returned for study on Earth in the event that an emergency required the rapid, unplanned end to the EVA.

The increased mobility using the LRV and ease of the travel made possible by this vehicle permitted the crew to travel much greater distances than on previous lunar landing missions. The vehicle was designed to carry the two crewmen and a science payload at a maximum velocity of about 8.6 mph (16 kph) on a smooth, level surface and at reduced veolocities on slopes up to 25 degrees. It could be operated from either crewman’s positions, as the control and display console was located on the vehicle centerline. The deployed vehicle was appoximately 10 feet long, 7 feet wide, and 45 inches high. Its chassis was hinged such that the forward and aft sections folded back over the center potion, and each of the wheel suspension systems rotated so that the folded vehicle would fit in quadrant I of the lunar module. The gross operational weight was approximately 1535 pounds, of which 455 pounds was the weight of the vehicle itself. The remainder was the weight of the crew, their equipment, communications equipment, and the science payload. After returning to the lunar module, the astronauts prepared for leaving the Moon. They retrieved the Solar Wind Composition foil and canceled the First Day Issue stamp. They performed the hammer and feather drop. They parked the lunar rover and positioned it to obtain color television coverage of the LM ascent. As their final act, they placed a memorial to “fallen astronauts” in a small crater about 20 feet north of the parking site.

On August 2nd, Falcon fired its ascent stage engine and lifted off the moon for its rendezvous with command module, Endeavor. For the first time, the lunar liftoff was seen on Earth via the LRV television camera. During the return flight aboard Endeavour, Worden became the first man to perform a space walk outside of earth’s orbit as he went outside to retrieve some film from the side of the space craft.

They collected over 170 pounds of lunar samples to bring back to Earth.

Glorious! I enjoyed reading through every mission detail in the article!