Cygnus spacecraft will return to flight atop Atlas V in 2015 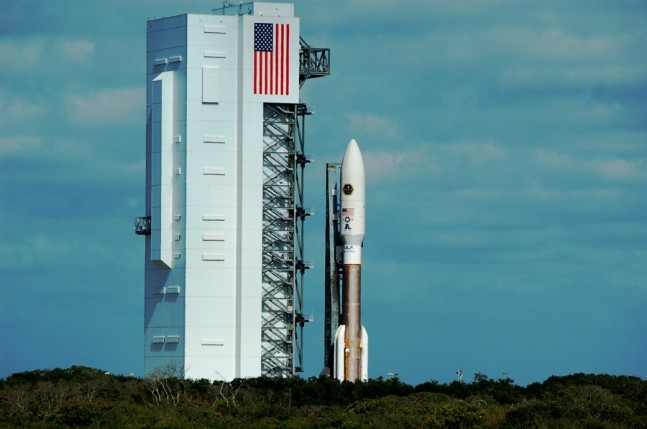 Following a catastrophic explosion on Oct. 28, resulting in the loss of a Cygnus spacecraft complete with valuable crew supply items and scientific experiments, Orbital Sciences Corporation (Orbital ) has announced plans to return to Wallops Flight Facility in 2016. On Dec. 9, the company announced a plan to fulfill its commercial resupply agreement with NASA, and will resume cargo flights to the International Space Station (ISS) as early as next year (2015). Their plan to return to flight will include at least one flight atop a United Launch Alliance (ULA ) Altas V rocket, before we are introduced to an upgraded Antares launcher. All cargo deliveries will be completed within contract deadlines and at no cost increase to NASA.

The road back to Wallops will take some time, but Orbital has a three-fold strategy. The first task was to secure an interim vehicle for the company’s next mission, Orb-4.

Following the Oct. incident, there has been much speculation as to which interim vehicle Orbital will use to help ferry their Cygnus spacecraft to the ISS. Many different launchers, both foreign and domestic, were considered. Several factors went into the vehicle selection, and ultimately Orbital decided on ULA’s Atlas V. The flight will be scheduled for late 2015, and if necessary, there is an option for a second flight in 2016. The Atlas V rocket will launch from Cape Canaveral’s Space Launch Complex 41 (SLC-41) in the 401 configuration, the most common version of that vehicle used. Due to its greater lift capacity, the Atlas V 401 will enable Cygnus to carry 35 percent more cargo than previously planned. The 4-meter fairing is raised to its position atop the Atlas V 401 booster. Photo Credit: United Launch Alliance

“We could not be more honored that Orbital selected ULA to launch its Cygnus spacecraft,” said Jim Sponnick, vice president, Atlas and Delta Programs. “This mission was awarded in a highly competitive environment, and we look forward to continuing ULA’s long history of providing reliable, cost-effective launch services for customers.”

The Atlas V has been the go-to vehicle for a variety of launches, including commercial, classified, military, and government payloads. The Atlas V has also been responsible for launching planetary missions such as New Horizons bound for Pluto and the Kuiper Belt, launched in 2006, Juno to the planet Jupiter flown in 2007, Mars Science Laboratory’s Curiosity rover in 2012, and the Mars Atmosphere and Volatile EvolutioN (MAVEN) mission launched in 2013.

Typically, Cygnus would fly atop an Antares rocket, launching from Pad 0A at NASA’s Wallops Flight Facility in Wallops Island, Va. The Antares’ first stage is powered by two Aerojet Rocketdyne AJ-26 engines.

The AJ-26 began its life more than 40 years ago as an NK-33 engine — manufactured by the Kuztensov Design Bureau in the former Soviet Union. The engine was intended as a replacement for the NK-15 engine on the failed Soviet N-1 Moon rocket (all four launch attempts, between 1969 and 1972, ended in failure). However, the program to land cosmonauts on the Moon was canceled before the NK-33’s could be used, and the engines sat in a warehouse for more than 20 years.

Rocketdyne discovered and purchased approximately 40 of the NK-33’s in the mid-1990’s. After refurbishment and upgrades (including the installation of advanced electronics and a gimbaling / steering capability), the engine was re-christened the “AJ-26,” and Orbital, a Dulles, Virginia-based company, purchased 20 for use on Antares. The AJ-26 has a less-than stellar testing history and has suffered at least two recent failures. Following an investigation into the explosion, it was determined that a turbopump in the AJ-26 engine failed, resulting in the loss of the vehicle. Prior to the explosion, Orbital was on the hunt for a replacement for the troublesome AJ-26 engine. As part of the plan to move forward, Orbital has confirmed the ability to accelerate the introduction of a new main propulsion system for the Antares rocket.

As a result, the company has announced that three CRS launches will take place in the first, second and fourth quarters of 2016, and will utilize the upgraded Antares. The flights will be in addition to the Atlas flight(s) and will fulfill Orbital’s commercial resupply agreement with NASA. Originally, they were scheduled for 8 flights, but thanks to the added cargo capacity of the Atlas and upgrades Antares vehicles, the 8th flight will not be needed.

Orbital has stated that the upgraded Antares will be equipped with a greater payload performance, allowing Cygnus to deliver in excess of 20 percent more cargo per flight than in prior plans. The first new component of the upgraded propulsion system are expected to arrive at the Antares final assembly facility mid-2015 to begin vehicle integration and testing. A hot fire test will be scheduled late in 2015. Area marked in red, surrounds the crater, and is scheduled for soil remediation this month. Photo Credit: Virginia Space

In addition to the vehicle upgrades, launch site repairs are also required and expected to take 12 months to complete. Damage at Pad-0A at the Mid-Atlantic Regional Spaceport (MARS) was not as extensive as first thought. Minor repairs, clean-up, and reconstruction requirements have been assessed and will be completed as early as the fall of 2015. Once the repairs have been handled, pad recertification will need to take place before flights can resume.

Virginia Space, NASA, and Orbital Sciences have worked together over the past six years to build up the MARS launch facility and provide the nation with a necessary second East Coast launch site. This site provides an extra location from which to launch NASA cargo resupply missions to the International Space Station (ISS), as well as supporting NASA science missions, and providing access to orbit for key national security payloads.

An environmental team performed soil sampling around the launch pad and inside the impact crater.  Results indicated the contamination was contained in the area immediately around the crater.  This area will require 6 inches of soil removal for remediation, which is scheduled for this month. NASA, Orbital, and MARS will continue to work together and carry out their environmental remediation plan, which includes pumping water from the impact crater and sampling.

Stay tuned to SpaceFlight Insider for more details as they become available.