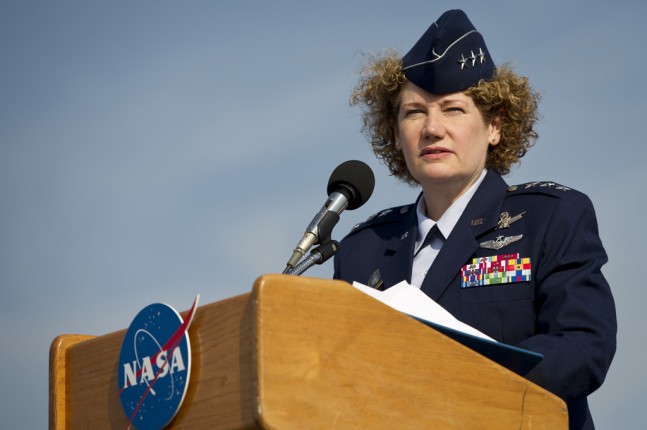 A report appearing in The Air Force Times details how four-time space shuttle veteran and the current commander of the Joint Functional Component Command for Space located at Vandenberg Air Force Base (VAFB) in California had been nominated by President Barack Obama to become the vice commander of Space Command. However, the nomination was blocked by prominent Democratic lawmaker Sen. Claire McCaskill. The reason for McCaskill’s efforts stems from a sexual assault conviction which Helms overturned in February of 2012.

The former NASA astronaut overturned the sexual assault conviction of Capt. Matthew Herrera at VAFB. Herrera was punished and dismissed from the U.S. Air Force this past December despite the conviction being overturned. According to The Air Force Times, Helms decided not to approve the conviction due to the fact that she was not convinced “beyond-a-reasonable-doubt” that the burden of proof had been met. Lt. Gen. Helms in an official NASA photo at the beginning of her career at the space agency. Photo Credit: NASA

“McCaskill has said Helms’ decision made it more difficult for victims of sexual assault to seek justice. She was also outraged earlier this year when a three-star general overturned the sexual assault conviction of Lt. Col. James Wilkerson, the former inspector general for Aviano Air Base, Italy.”

Amidst the controversy, some are trying to prevent a similar situation from happening in the future.

“A group of senators led by Kirsten Gillibrand, D-N.Y., points to such cases as a reason to support a Senate bill that would remove authority over sexual assault prosecutions and sentences from commanders. But McCaskill opposes the move, saying commanders should retain the authority but be held accountable for their decisions,” stated a report from Stars and Stripes.

Being more than qualified for the vice commander position, Lt. Gen. Helms was commissioned from the U.S. Air Force Academy in 1980, first serving as a F-15 and F-16 weapons separation engineer and a flight test engineer. She is also a graduate of Standford University and the USAF Test Pilot School at Edwards AFB in California.

“Selected by NASA in January 1990, General Helms became an astronaut in July 1991. On Jan. 13, 1993, then an Air Force major and a member of the space shuttle Endeavour crew, she became the first U.S. military woman in space. She flew on STS-54 (1993), STS-64 (1994), STS-78 (1996) and STS-101 (2000), and served aboard the International Space Station as a member of the Expedition-2 crew (2001). A veteran of five space flights, General Helms has logged 211 days in space, including a spacewalk of eight hours and 56 minutes, a world record. General Helms commanded the 45th Space Wing at Patrick AFB, Fla. Her staff assignments include tours at Headquarters Air Force Space Command, Air Education and Training Command, and U.S. Strategic Command,” reads her Air Force biography.

According to a U.S. Air Force spokesperson, Helms applied for retirement on November 8 of last year with more than 33 years of service.

Kindly let me know whether Helms is now working in the Middle East particularly Afghanistan. I am a Kenyan,working in a Public University and I have been following up some links connected to Susan J. Helms.

Susan Helms was a student of mine in high school Physics.She always did what was right from the first day in my class.
The Air Force lost the very best officer it had.
I am saddened by the short sighted view taken by the Senator.
Our country lost the best qualified person for a very important job . What a shame!!!
Thanks for reading my comments Herb Mohn

Gen. Susan Helms, Ma’am, in my eyes is a legend among female astronauts in history. He Admired. I’m looking forward to a great event in Naples. I would like to pay my respects. Merry Christmas Happy New Year.

Gen.Susan J.Helms,my friend in my eyes is a legend among the female astronauts in history. She admired. and looking forward to a Great event in BANGLADESH.I would like to play my respect and love. Merry Christmas and Happy New year.

I would like to get in touch with Gen helms. I work with her
in Oregon. I give permission to give my name and email adress