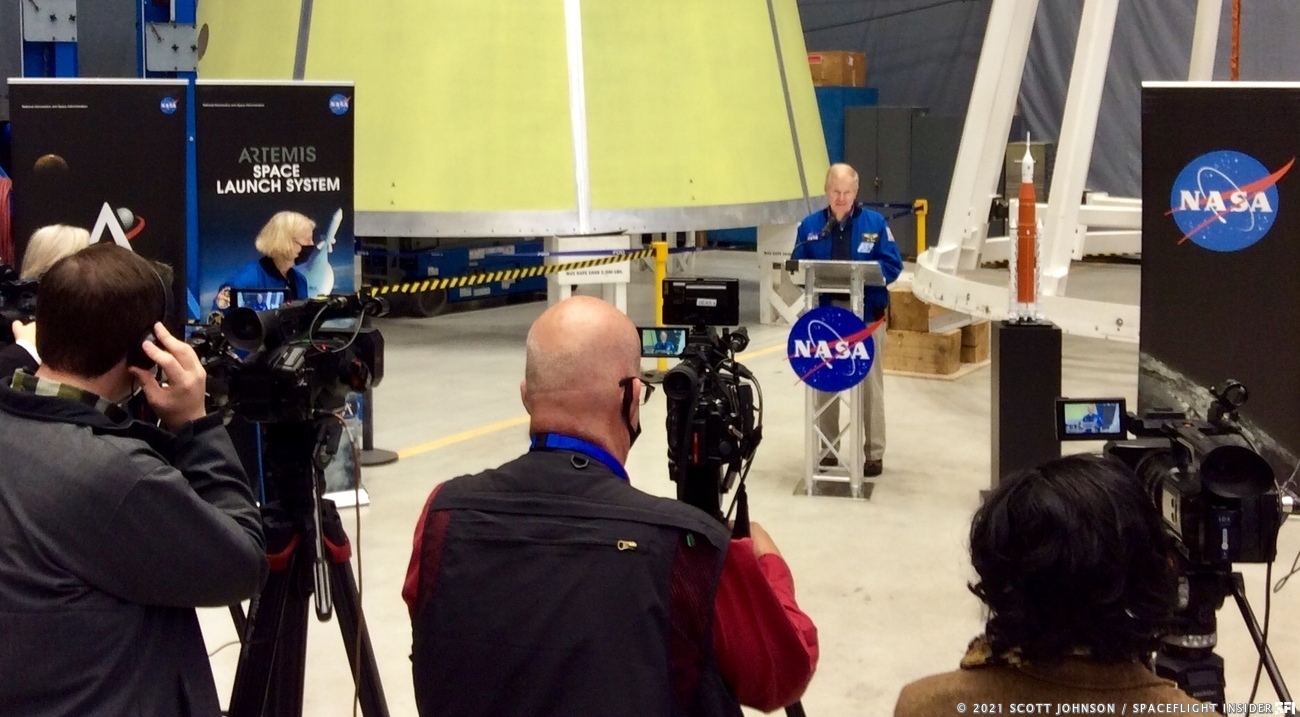 HUNTSVILLE, Ala. — On Tuesday, Nov. 30, NASA Administrator Bill Nelson, along with the agency’s Deputy Administrator, Pam Melroy, visited the Marshall Space Flight Center (MSFC) for an update on the center’s contribution to the nation’s space program, including its role in the burgeoning Artemis program meant to return humans to the Moon.

This was the first visit to MSFC for Nelson and Melroy since being confirmed to their current positions. It was also MSFC’s first media event since the onset of the COVID-19 pandemic.

“[T]his one will be on the flight when we do our first landing of the first woman and the next man on the Moon,” Nelson said.

Nelson went on to address MSFC’s place in history.

“You have a very special, special part in our nation’s history, in our nation’s space program going back when the United States government at the end of World War II had the foresight to be able to get most, not all, but most of the German rocket scientists and then brought them, eventually, here to Huntsville,” Nelson said. “Then when we had to succeed, as the Soviets had beat us to the high ground first, with Sputnik, and later with Gagarin, then when America got in gear, it was in large part because of the Marshall Space Flight Center.”

With regard to the Artemis program, Nelson said, “Now we’re going back to the Moon. But this time it’s not the Apollo generation, it is the Artemis generation. And you have seen a lot of that generation here today in this briefing. It’s going to be extraordinary what we’re doing.”

Although behind schedule, the Artemis program is progressing, and Nelson indicates the launch of Artemis I — the first flight (uncrewed) of SLS — is on schedule for February 2022.

The next scheduled Artemis I milestone is the “rollout” of the first fully-assembled SLS from Kennedy Space Center’s (KSC) Vehicle Assembly Building (VAB) by the end of the year. However, there is some concern the rollout may get “pushed” into the new year. In response to a question by SpaceFlight Insider, as to whether there was any update on the status of the rollout actually taking place by the end of the year, Nelson said, “No sir, but it’s in that area. End of the year. First of the year. It’s in there.”

Nelson was also asked about funding for MSFC, and specifically about funding for a new headquarters building (Building 4200) — as the current building has been “condemned” / decommissioned and needs to be replaced. He explained NASA has $750 million allocated to infrastructure alone in the Biden administration’s “Build Back Better” bill.

“That’s the kind of stuff that we’ve got to start passing, and we’re going to do everything we can to get the votes,” Nelson said. “It’s passed the House now, by the skin of its chinny chin, chin, and so, we’ll see if the Senate can pass it, or pass a version of it. That would then go back to the House to be passed.”

Nelson and Melroy will continue their nation-wide tour of NASA facilities at south Mississippi’s Stennis Space Center (SSC) on Dec. 7, and SpaceFlight Insider will be there.