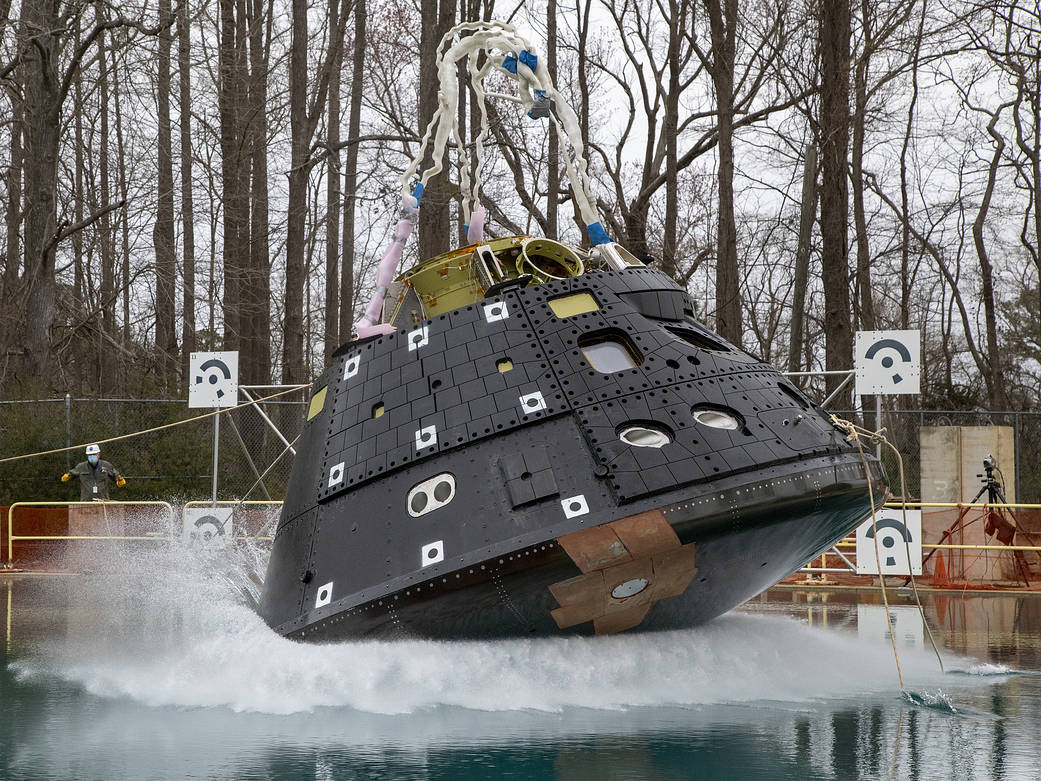 The first drop test for the latest Orion capsule model took place March 23, 2021. Testing was done from the height of 18 inches in splash impact basin at NASA Langley. Credit: NASA

NASA made a considerable splash Tuesday afternoon by dropping its Orion crew module into a pool of water at its research facility in Hampton, Virginia.

The test only lasted a few seconds beginning at 2:02 p.m. EDT (18:00 UTC) April 6, 2021, and saw the 14,000-pound (6,300-kilogram) test capsule, an identical replica of the flight article currently undergoing pre-flight processing at NASA’s Kennedy Space Center in Florida, plunged into the Hydro Impact Basin at NASA’s Langley Research Center in Hampton, Virginia. For the test, the capsule was positioned approximately 7 feet (just over 2 meters) above the water, where it was released and impacted the water as planned.

The test serves as part of a series of drop tests, which began March 23, to finalize computer models for loads and structures prior to the Artemis 2 flight test, NASA’s first mission with crew as part of the Artemis program.

NASA still has at least two more drop tests to complete, including a higher-altitude drop test and a “Swing test” where the crew module will be swung into the water at an angle, similar to a rope swing.

“This is sort of the end of the road for this test article,” NASA’s Orion Crew and Service Module Manager Debbie Korth said about the program’s next steps during a live webcast of the April 6 test. “This will be the last big test to qualify the structure, but it’s been used all along the way for a variety of tests to verify the vehicle design.”

Orion serves as part of NASA’s ambitious plan to return humans to the Moon through the Artemis program. Built by Lockheed Martin, the Orion crew module can carry up to 6 astronauts (four astronauts for missions to deep space) and is powered by the European Space Agency built European Service Module. The capsule is set to make its second uncrewed trip to space as part of the inaugural launch of NASA’s Space Launch System rocket as early as November of this year.

Orion falls into the pool of water as part of the April 6, 2021 test. Credit: NASA