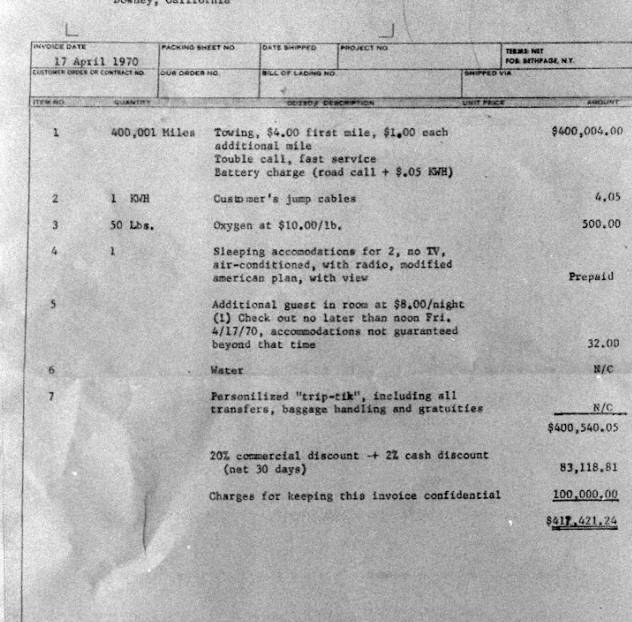 An invoice heralding back to the Apollo era helped provide a bit of levity to the end of the a particularly dark point in NASA history. Photo Credit: LIFE Magazine/Bill Eppridge

In April 1970, LIFE Magazine dispatched photographer Bill Eppridge to the Lovell residence in Houston. Apollo 13 commander Jim Lovell, the husband and father of the household, was currently stranded aboard a crippled spacecraft a quarter of a million miles away.

Over the next few days, Eppridge captured the emotions of the Lovell family, as well as the countless friends and well-wishers that ducked in and out of the house. In some of these photos, around the last day of the mission, there are guests who are gathered around a sheet of paper and laughing.

Upon closer inspection, the paper is actually an “invoice.”

A little background info for those of you who are not regular followers of the U.S. manned space program.  After an oxygen tank in the service module had ruptured, the Apollo 13 crew was forced to power down the command module Odyssey and take shelter in the lunar module Aquarius.  The move to the lunar module posed several issues – mainly the fact that the LM was designed for two people, not three – which put a strain on the vehicle’s resources. Later in the mission, the crew used the LM to power up the CM and bring it “back to life.”

The invoice is dated April 17, 1970, the day of splashdown. It is addressed to North American Rockwell – the makers of the command module – and is from Grumman Aerospace Corporation, the makers of the lunar module.

Incidentally, North American Rockwell never paid the bill; they argued instead that Grumman actually owed them money for towing the lunar module to the moon on Apollos 10, 11, and 12. Sadly, no copies of this invoice exist.

What’s up,I log on to your blogs named “The Apollo 13 invoice… – SpaceFlight Insider” regularly.Your story-telling style is awesome, keep it up! And you can look our website about daily proxy.

I was in the 9th grade when Apollo 13 had this issue., I can remember watching Walter Cronkite and Jules Bergman, I think that was his name. He was the leading science person and was always involved in explains exactly what was going on. He was great..My mom and dad and I were glued to the television. My dad was still in the Air Force when this happened and no matter where we went in San Antonio, people were watching the news reports. The day Apollo 13 splashed down my high school ushered us into the huge auditorium and we were able to watch the entire landing on tv’s placed in the auditorium. It was breath taking.