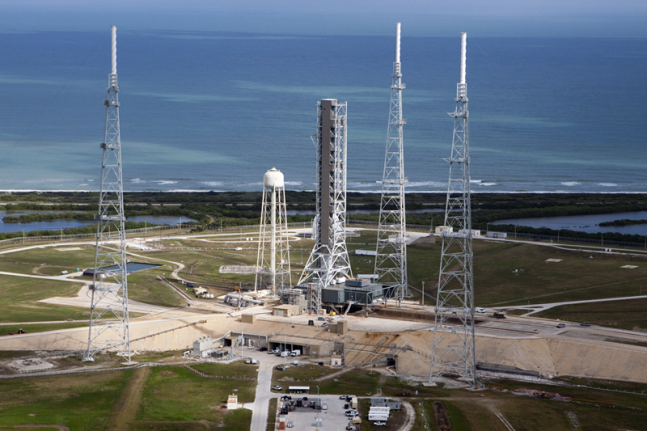 NASA has completed steps that the space agency has deemed as being important to the conversion of Kennedy Space Center to a modern spaceport - one capable of supporting multiple users. Photo Credit: Kim Shiflett / NASA

On Thursday, Oct. 23 NASA’s Office of Inspector General (OIG) issued a 33-page report detailing an audit of the agency’s efforts to transform Kennedy Space Center (KSC) into a multi-user spaceport. So far NASA has leased about half of the 23 facilities at KSC which are no longer in use following the end of the Space Shuttle Program. The report examined progress made by the agency, cited problems with NASA’s process for soliciting and awarding leases of under-utilized assets and provided recommendations for addressing issues with the leasing process. Boeing plans to use Orbiter Processing Facility-1 (OPF-1) to service the X-37B (this is an image of nearby OPF-3). Photo Credit: Jim Siegel / SpaceFlight Insider

Another step in the transition in making KSC a multi-user spaceport was the leasing of Pad 39A to SpaceX on April 14, 2014. The OIG report approved of this development but noted that KSC’s initial approach when soliciting interest in the facility and inconsistent communications with potential tenants created confusion.

The report questioned NASA’s rational for rejecting Space Florida’s request on the behalf of the state of Florida to transfer land in the area of Shiloh with the goal of developing a commercial spaceport.  NASA stated that the land is needed as a buffer zone between its operations and nearby communities and that the land is a potential site for future requirements. The OIG stated in its report that KSC personnel were unable to provide any details about the need for a buffer zone or any planned future mission requirements involving the land.

The OIG’s interviews with representatives of commercial companies revealed four main obstacles to operating at KSC:

(1) Possible conflicts between their operations and Federal missions.

(2) The time consuming and bureaucratic nature of the Space Center’s safety review
process.

(4) Difficulty obtaining services such as specialized launch support equipment or technical consulting. While the companies that were interviewed stated that they were not discouraged from attempting to lease assets at KSC, the center could become less competitive as the number of domestic launch sites increases.

The OIG recommended in its report that NASA develop additional guidelines specifying when competition is appropriate when leasing assets to the agency’s commercial partners and clarifying the procedures that should be used in such competitions and provide a clear statement of evaluation criteria.

Secondly, the agency should develop a clear communication strategy which ensures that all potential commercial partners are aware of changes to lease terms and conditions that may affect the development of proposals. The report also suggests that NASA can better facilitate commercial activities at KSC by examining ways to amend policies and practices that govern commercial space activities with the goal reducing costs and burdens on commercial partners interested in doing business at KSC while ensuring appropriate levels of safety and security. NASA’s budget has consistently been whittled away since the end of the Apollo Program in the 1970s. Photo Credit: Michael Seeley / SpaceFlight Insider

This article was written using information from Florida Today and the NASA OIG report.

Truth of the matter is NASA is deliberately making prospective aerospace companies who want to come to KSC jump thru all kinds of red tape hoops and when and if they do, NASA digs up some new reason why they can’t accommodate them.
One good example is, Blue Origin has tried to set up business on KSC and NASA has thrown up road block after road block. NASA has also delayed the Air Force from coming to KSC by almost a year.
This administration is doing everything they can to prevent any advancement of space flight. KSC could have thousands of new jobs, but Bolden has been put in charge of slow walking everything from SLS, Commercial Crew and new business at KSC.
The funny thing is, all except for space x. NASA bends over backwards to accommodate spacex, I wonder if that’s because Elon has donated so much money to Obama.
Seems like this administration is more concerned with keeping the Russians employed rather than our own people.

Ever since NASA saved SpaceX with the COTS contract, they have been almost like 2 peas in a pod. SpaceX is doing a lot of what NASA wants to do, but can’t because of Congress, in my opinion. Besides, SpaceX has a PLAN to get to Mars, in steps, and NASA is all EARS & EYES. Also, I wouldn’t be surprised if NASA contracted SpaceX to launch the Orion capsule for a few lunar missions in the future. Also, if SpaceX added 2 more cores to the Falcon Heavy vehicle, they would have an 80+_tonne launch vehicle. This type of vehicle would be able to launch Orion on Lunar trajectories a lot less expensive that the SLS.

The idea is to get a good mix of contracts and contractors and not give space x every piece of the pie. Space x is no different than any other contractor, if they spread themselves over many different contracts there’s more likely chance of failure. Besides their employees are over worked to the point they are not fully alert. This practice may work for cargo missions, but when it comes to man space flight, clarity and alertness is way to important. NASA even has rules about how many hours a person can work and these rules will be enforced in a manned program. That’s something I believe space x doesn’t want to abide by.
KSC needs a good mix of contractors and hopefully we’ll get there someday.