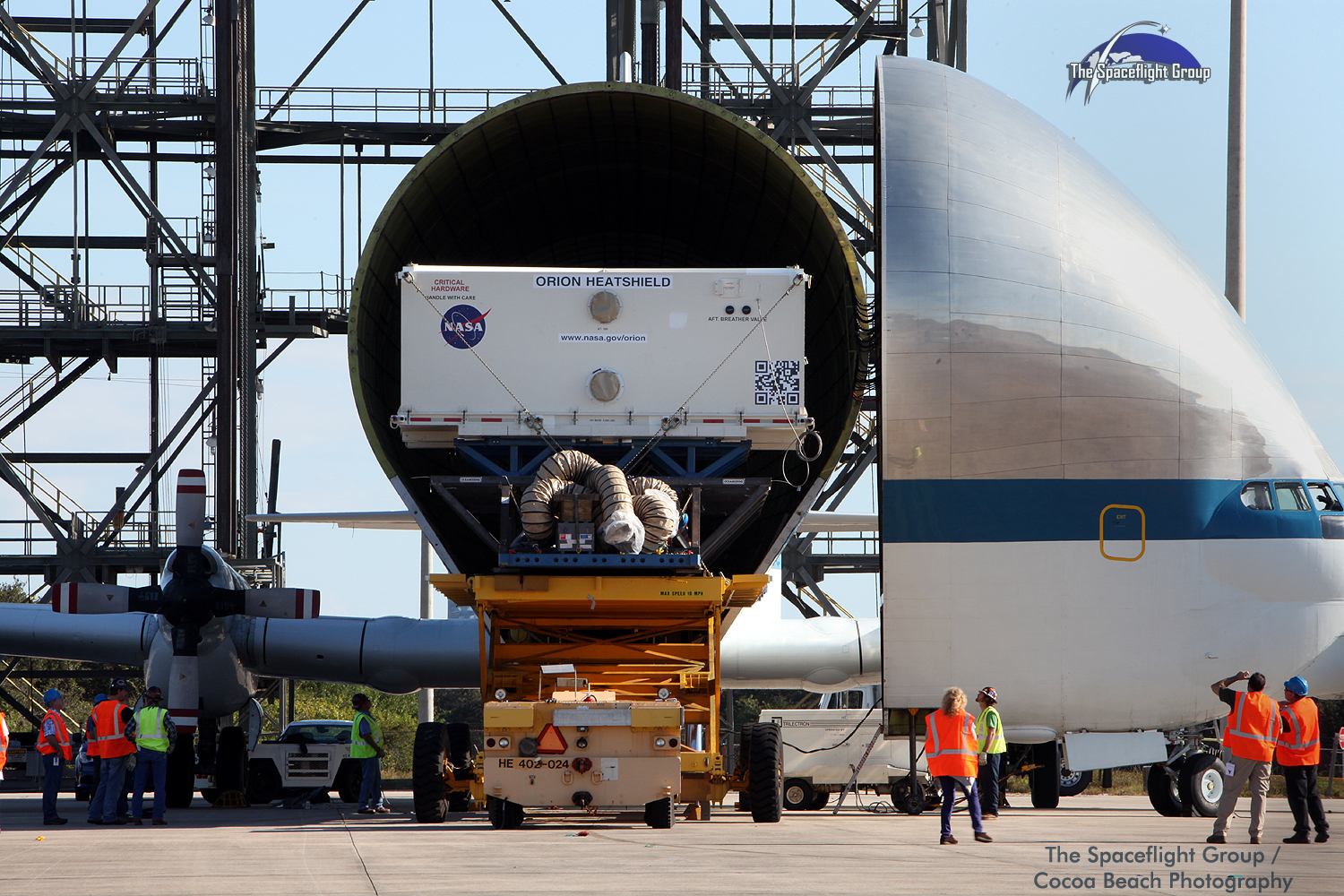 KENNEDY SPACE CENTER, FL – One of the strangest-looking aircraft in NASA’s fleet delivered the heat shield which will be used for next year’s first flight of the space agency’s Orion Multi-Purpose Crew Vehicle – Exploration Flight Test 1 (EFT-1). The “Super Guppy” as it is known touched down Wednesday Dec. 4.

The heat shield is touted by the space agency as being the largest if its kind. It will be several months before it is installed into the Orion flight test article at NASA’s Operations and Checkout building (NASA has stated the heat shield will be attached to the spacecraft in March). Due to the heat shield’s size, the “Super Guppy” was tapped to deliver the precious cargo. Photo Credit: Mike Howard / SpaceFlight Insider

“The heat shield completion and delivery to Kennedy, where Orion is being prepared, is a major step toward Exploration Flight Test-1 next year,” said Dan Dumbacher, NASA’s deputy associate administrator for exploration systems development. “Sending Orion into space for the first time is going to give us crucial data to improve our design decisions and develop Orion to send humans on future missions to an asteroid and Mars.”

NASA has tapped a United Launch Alliance Delta IV Heavy rocket to launch Orion on its maiden voyage. The target date remains fixed for September 2014. In terms of the heat shield, today’s events were just one part of a long journey.

In January 2012, the heat shield was located in Colorado under the care of Orion’s prime contractor Lockheed-Martin. At this stage, the shield only consisted of the titanium support structure on which the rest of the heat shield would be built. The crucial component also gained its carbon fiber “skin” while at the company’s Waterton facility, located near Denver. A few months later in March it was sent to Dextron Defense Systems’ facility near Boston. Here the actual shield itself is constructed. The shield’s “skin” is made up of a “honeycomb” of fiberglass-phenolic. The 320,000 individual cells are made up of the ablative (made to burn off and carry the heat with it during reentry into Earth’s atmosphere) material Avcoat.

Each of these cells has to be sanded to meet the exacting standards required by NASA.

“Many people across the country have poured a tremendous amount of hard work into building this heat shield,” said Orion Program Manager Mark Geyer. “Their efforts are a critical part of helping us understand what it takes to bring a human-rated spacecraft back safely from deep space.” During the long road to Kennedy, the material comprising the heat shield was arc-jet tested at NASA’s Ames Research Center in California. This procedure heats gases up to incredibly high temperatures as well as simulates the speeds these gases will impact the heat shield. This emulates what the shield will encounter upon reentering the atmosphere. In terms of EFT-1 – this is the main event.

During this inaugural flight of the spacecraft, Orion will travel out some 3,600 miles above the Earth (by comparison, the International Space Station orbits at around 260 miles). It will then return to Earth at approximately 20,000 miles per hour. As the spacecraft’s heat shield will encounter temperatures of about 4,000 degrees Fahrenheit – this will prove the ultimate test of the heat shield. There will be no crew on this mission which, in many ways, is similar to the Apollo 4 test flight back in the 1960s. EFT-1 will travel to distances and at speeds no man-rated spacecraft has traveled in more than four decades. NASA will use the data accumulated from this flight to improve the spacecraft’s overall performance. If areas of the spacecraft show signs of weakness, they will be strengthened, if they appear to strong, they will be reduced. Although this might appear counter-intuitive, in space flight – weight is everything and reducing weight should improve performance.

“The capsule will be launched into orbit by a Delta IV rocket from CCAFS.  Orion will take two elliptical orbits of the Earth extending out to 3000 miles.  Upon reentry, the capsule will reach speeds of 20,000 miles per hour before slowing and descending into the Pacific Ocean near San Diego,” California, said Scott Wilson, NASA’s Orion Production Manager who was at KSC to witness the arrival.

NASA hopes that Orion will be the spacecraft that launches a rebirth of crewed missions to destinations such as the Moon, asteroids and perhaps, one day, Mars.