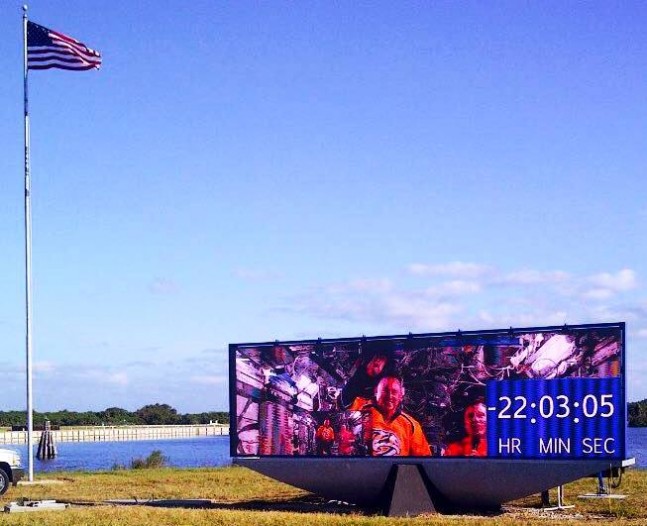 KENNEDY SPACE CENTER, Fla — Well in advanced of the Dec. 4 first flight of NASA’s new Orion spacecraft, the space agency has installed its brand new Countdown Clock. The new timepiece is less “clock” and more flat screen TV and made its appearance the week prior to the launch of Orion on Exploration Flight Test 1.

The new clock is similar in design to a sign mounted on the side of the adjacent Vehicle Assembly Building (VAB) and is able to do much more than just count down to launch or the elapsed time of the space agency’s missions. As noted, EFT-1, will mark the first flight of NASA’s new Orion crew-rated spacecraft. Orion will be launched on a two-orbit mission which will test out the spacecraft’s key systems some 3,600 miles (5,794 km) above the Earth.

Poised ready for flight atop a United Launch Alliance (ULA ) Delta IV Heavy booster, the spacecraft will carry out these orbits and then return to Earth at a speed of some 20,000 miles (32,187 km) per hour.

In terms of the now-retired Countdown Clock, its history goes back to when the agency still sent crews to the surface of the Moon – 1969. The timepiece was added to the U.S. National Register of Historic Places as part of a Multiple Property Submission on Jan. 21, 2000.

This new clock will join a number of other’s located at Kennedy that provide accurate times for pre launch procedures as well as to record the amount of time that crewed missions have been underway.

NASA has a team that handles these clocks, the Imaging Technical Support Group. They ensure that exact times are dispersed during the various missions to those groups that need precise, synchronized times to coordinate their efforts when delivering crews, cargo and spacecraft to orbit. In terms of the agency’s various missions – exact timing is critical.

“We double and triple check our times. We target launch times down to the second, and things happen quickly as we approach T-0. These numbers are critical to us and they must be correct,” said the Group’s Steve Payne during an Oct. 2010 interview.

SpaceFlight Insider received the above notification about when the Countdown Clock entered into service some time ago. Our contacts within the space agency graciously provided us with this document – which states that the date SFI had originally posted, Nov. 9, 1967 – was when the clock entered into service. According to the Florida Division of Historical Resources, the clock was in operation for the uncrewed flight of Apollo 4. It is at this time unclear which of these two dates is accurate, if one source is referring to a different clock, or why this difference exists. SFI will continue to research the matter.

This article was edited at 8:52 p.m. EST on Dec. 1, 2014 to provide more accurate information regarding the Countdown Clock’s installation

You mentioned that “the new clock is similar in design to one mounted on the side of the adjacent Vehicle Assembly Building” .. I don’t think I have ever seen that clock in photos. On what side of the VAB is it located?

According to a KSC press release, http://mediaarchive.ksc.nasa.gov/detail.cfm?mediaid=71042,
the clock was built in 1969.

In a collectSPACE article, http://www.collectspace.com/news/news-100114a-nasa-countdown-clock-replace.html, it is reported that the clock was first used for the Apollo 12 launch.

NOP 7000,
The information NASA representatives provided us with prior to this, stated the clock was installed on that date. Given the correction and the fact collectSPACE has clarified the period – we’ll update our articles. Thanks!
Sincerely and with kind regards, Jason Rhian – Editor, SpaceFlight Insider