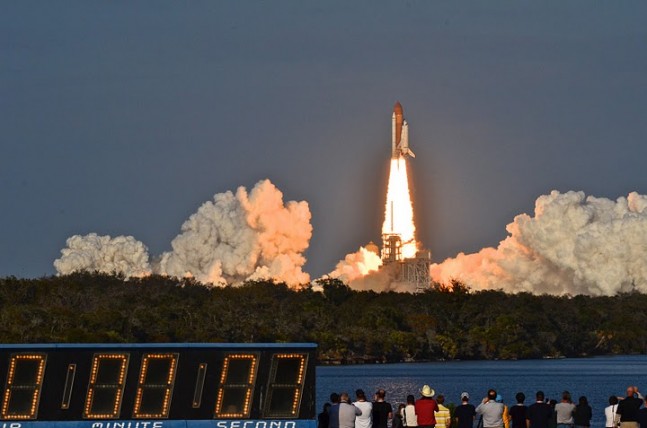 KENNEDY SPACE CENTER, Fla – The Countdown Clock located at NASA’s Kennedy Space Center in Florida is one of the more iconic structures located at the center. The Countdown Clock has been at the Kennedy Space Center Press Site since the Apollo era. With space flight now entering a new age, NASA is looking to replace the iconic clock with something more modern – and much more versatile.

Members of the NASA Social held for the Sept. 21 launch of a SpaceX Falcon 9 v1.1 rocket with its payload of a Dragon spacecraft and its 5,100 lbs of cargo were told about the plans for the Clock and tweeted that it would be replaced by December of 2014. While this is what the space agency hopes to do – firm plans are not currently in place in terms of when the Clock will be retired – or where it will be going. KSC’s Countdown Clock has been used to track the various times of NASA missions as far back as the 1960s. Photo Credit: Jim Siegel / SpaceFlight Insider

SpaceFlight Insider spoke with NASA’s Lisa Malone who stated that, while nothing is set in stone in terms of the destination of this historic artifact, the space agency is looking to replace it with a more modern version of the clock which currently resides approximately three miles from Launch Complex 39 – the site where NASA used to launch astronauts from for more than four decades.

The Countdown Clock’s replacement will probably be able to show videos as well as other elements. The current Countdown Clock uses a series of light bulbs to provide the exact time before a mission takes off, as well as in the case of crewed missions – mission elapsed time.

“The Clock is getting older and it isn’t working as well as it used to. It does need to be replaced, there are some parts that it uses that aren’t manufactured anymore,” Malone said. “Nothing is a ‘done deal’ yet…if we’re going to replace this clock, it’d be nice to have the new one out there for EFT-1.”

EFT-1, or Exploration Flight Test 1, is the first flight of NASA’s new Orion crew-rated spacecraft. The mission is currently scheduled to launch on December 4 of this year. Orion will be launched on a two-orbit mission which will test out the spacecraft’s key systems some 3,600 miles (5,794 km) above our world. Launching atop a United Launch Alliance (ULA ) Delta IV Heavy booster, the spacecraft will carry out these orbits and then return to Earth at a speed of some 20,000 miles per hour (32,187 km).

The Countdown Clock’s place in history is not in question; the device was added to the U.S. National Register of Historic Places as part of a Multiple Property Submission on January 21, 2000. It has served NASA since its installation in 1969. Several possible destinations for the clock are possible, with the adjacent Kennedy Space Center Visitor Complex most likely.

There are a number of clocks located at Kennedy Space Center that provide accurate times for missions about to launch, as well as those already underway. These timepieces are set by the IMCS Timing and Imaging Technical Support Group. A number of timing technicians are responsible for the distribution of the exact times to various points in and around KSC. These technicians will be responsible for the new timepiece when it is put in place. With the end of the shuttle era, NASA has opted to use the period between major programs to refurbish and modernize a variety of systems at Kennedy. Photo Credit: NASA

This article was edited at 9:32 a.m. EDT to include the date the Countdown Clock entered service at Kennedy Space Center

Give the old clock to the Smithsonian!