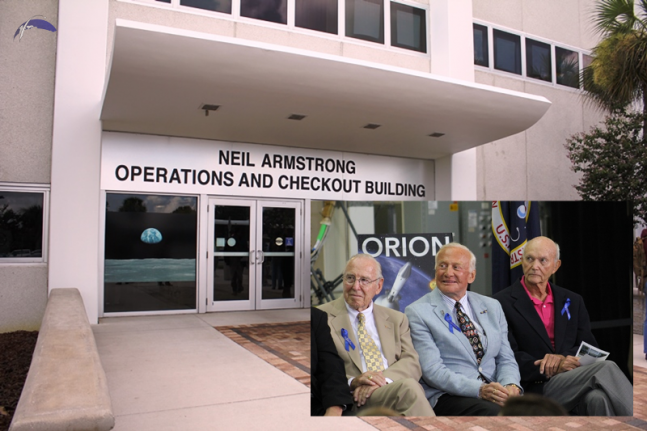 KENNEDY SPACE CENTER, Fla — The day after the U.S. remembered the 45th anniversary of man’s first landing on the Moon. Starting shortly after 10 a.m. EDT (1400 GMT) on Monday, July 21 NASA rededicated the Operations and Checkout Building the Neil Armstrong Operations and Checkout Building. Numerous dignitaries within aerospace as well as elected officials, present and former NASA astronauts were on hand for the event.

With the backdrop of the Orion Multi-Purpose Crew Vehicle, which is scheduled to be launched this coming December atop a United Launch Alliance Delta IV Heavy rocket from Cape Canaveral Air Force Station’s Space Launch Complex 37. Today however, the primary focus was on the rededication of this iconic structure.

“More than just an astronaut, Neil was a pilot, a superb engineering test pilot,” said Kennedy Space Center’s Director, Robert Cabana, during his opening remarks. “He had a wealth of knowledge – and he loved to share it. It’s fitting that this building bears his name.” “Wow, what an event! This is just incredible, it was perfectly done, it was tasteful. I really enjoyed hearing from Armstrong’s two sons, when they spoke, they gave a very human, very personal picture of the kind of person that Neil Armstrong was,” said Florida Senator Thad Altman shortly after the ceremony. “I really enjoyed today’s event and it’s a fitting tribute to Neil Armstrong. Moreover, this is the perfect place to carry his name, because here is where we are building a vehicle to send crews to another planet” This sentiment was mirrored by a representative of one of the company’s that is currently developing spacecraft for use in ferrying crews to the International Space Station.

“This is a very special day, to see Neil Armstrong’s name go on the O & C facility. From our perspective at Sierra Nevada we represent what might be the future of this facility as we’re going to be using this building to process Dream Chaser. So, every time that we come in this building we’ll think about the standards and the level that Neil set when he did what he did and hopefully we can live up to that in the future,” said SNC’s Corporate Vice President of Space Systems Mark Sirangelo. The assembled astronauts took a tour of the Orion capsule which is being assembled at the newly-christened Neil Armstrong Operations & Checkout Building. Photo Credit: Jason Rhian / SpaceFlight Insider

While Armstrong is primarily remembered as being the commander of the first lunar landing on July 20, 1969, he also commanded the Gemini 8 mission three years earlier in 1966. He was also one of NASA’s test pilots of the X-15 rocket plane as well as an aerospace engineer, naval aviator, test pilot, and university professor. Armstrong passed away in 2012 from complications following coronary artery bypass surgery. He was 82 at the time of his passing.

Kennedy’s O&C building was originally known as the Manned Spacecraft Operations Building, with construction starting in January of 1963. Several of Project Gemini’s spacecraft were integrated and tested in the structure. However, the building was built to test and assemble the Apollo Command and Lunar Modules. The newly-dubbed NAO&C building underwent a two-year period of renovation which started in 2007. Armstrong’s two sons, Mark (seen here) and Rick Armstrong expressed their memories of their father and conveyed their gratitude on having the O&C building renamed in his honor. Photo Credit: Jason Rhian / SpaceFlight Insider This article was edited at 11:56 p.m. EDT to include the YouTube video of the event from NASA.