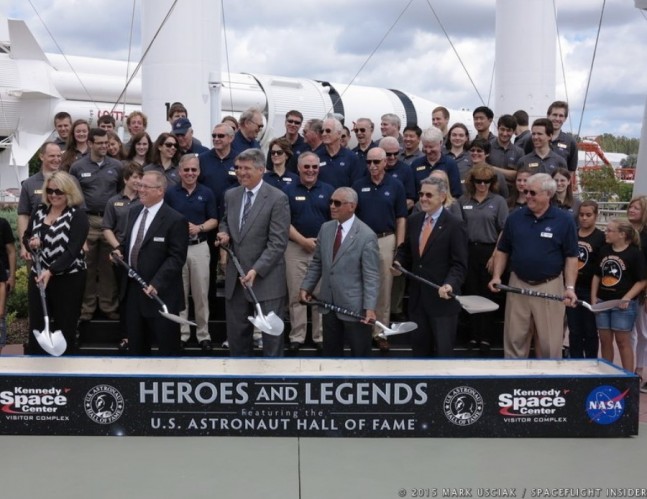 Officials from NASA, Delaware North and the U.S. Astronaut Hall of Fame conducted a ceremonial groundbreaking on May 29, 2015, for the new "Heroes and Legends" center at the Kennedy Space Center Visitor Complex. Photo Credit: Mark Usciak / SpaceFlight Insider Guests were told more about the plans for the “Heroes and Legends” facility during an event held at the Visitor Complex’s Debus Center. Photo Credit: Mark Usciak / SpaceFlight Insider

Today’s ceremony kicked off at 9:45 a.m. EDT at the Complex’s Debus Center. After a presentation detailing what the new facility would look like, the event moved outdoors to the Complex’s Rocket Garden. The ceremony had an array of special guests who included the current NASA Administrator and four-time space shuttle veteran Charles Bolden, NASA’s Kennedy Space Center Director Robert Cabana (himself also a former four-time shuttle astronaut) and numerous others.

“Heroes and Legends promises to speak to the hearts and minds of all generations, from those who bore witness to some of America’s first space launches, to those who dream of someday being among the first to set foot on Mars,” Cabana said.

Bolden and Cabana were joined by fellow shuttle veteran Dan Brandenstein, who is the chairman of the Astronaut Scholarship Foundation’s board of directors, NASA’s Cheryl Hurst, Therrin Protze (chief operating officer for Kennedy Space Center Visitor Complex), and Jim Houser, president of Delaware North’s parks and resorts business during the “groundbreaking” where the quartet shoveled sand out of a decorated box to mark the occasion. On Saturday, May 30, four veteran space shuttle astronauts are poised to join the ranks of iconic U.S. astronauts such as Alan Shepard, John Glenn, Neil Armstrong and Sally Ride during the 2015 U.S. Astronaut Hall of Fame induction. This year’s inductees include John Grunsfeld, Steve Lindsey, Kent Rominger and Rhea Seddon.

“Today, we take the dream that was first conceived by America’s space pioneers, and give it a new life, a new incarnation, befitting the service and sacrifice of all those who dared to follow in their footsteps – many of whom are in the room with us today,” Protze said. “I know I speak for all of those involved when I say, we could not be more proud to create this attraction in your honor.” The KSC Visitors Center is way overpriced, I think they’re trying to keep up with Disney’s prices. Besides, I thought it was mandated by NASA that the Space Shuttles were suppose to go to museums that the public could easily access to see them for very minimum cost?. Discovery is at the Smithsonian and it’s free to see.