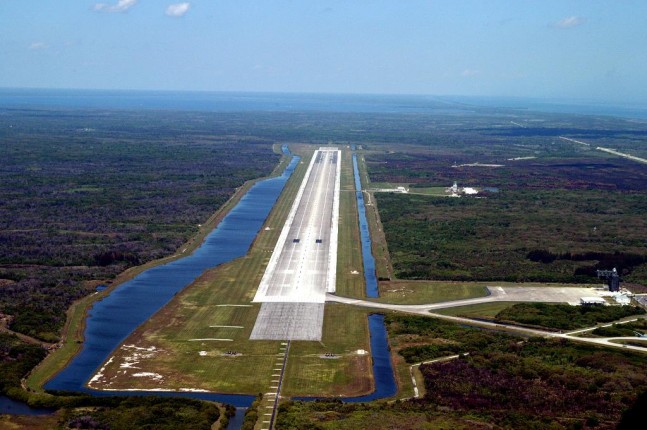 NASA's Shuttle Landing Facility in Florida will be managed by Space Florida, the State agency responsible for maintaining and growing the aerospace industry in the Sunshine State. Photo Credit: NASA

For three decades, the Shuttle Landing Facility (SLF ) has been a mainstay at Kennedy Space Center. At 15,000 feet (4,572 m) long, it is the 18th longest runway in the world and is also maintains a major place in history as the ending point of the majority of Space Shuttle missions. Up to now, the shuttle is the only crewed spacecraft to land at Kennedy Space Center, which also happened to be the site where the spacecraft lifted off from. This historic stretch of concrete – is now under new management.

With the end of the Space Shuttle Program, the SLF is entering a new era. On June 22, 2015, Space Florida, the aerospace developer for the State of Florida, announced the agreement to transform the SLF into a multi-user facility which will be utilized by more and more space startups as they evolve into mature companies.

Space Florida plans to use the facility as a testing ground for a variety of new vehicles from different companies, including not only crewed spacecraft but also unmanned aerial vehicles (UAVs) and new horizontally launched spacecraft.

Other aircraft have used the SLF in the past, including the “G-Force One” aircraft of Zero Gravity Corporation and the Virgin Galactic GlobalFlyer. It has also been used by NASCAR for vehicle testing. The runway has two designations: if a shuttle is approaching from the northwest, it is designated runway 15; if it’s from the southeast, it is runway 33. Vehicles which could possibly use the facility include Sierra Nevada’s Dream Chaser, XCOR’s Lynx, and F-104 Starfighters.

The U.S. Air Force could possibly use the facility to land its X-37B Orbital Test Vehicle. In fact, the mini-shuttle’s first use of the SLF might be at the end of its current mission, which launched in May.

Kennedy Space Center’s director and a former astronaut himself, Bob Cabana, said, “Following the final space shuttle landing in 2011, the site has transformed into a multi-user facility supporting a variety of commercial and government partners. We look forward to partnering with Space Florida to expand upon the multi-use of this historical asset.”

Cabana and Space Florida’s CEO Frank DiBello signed a 30-year property agreement for the operations and management of the SLF.

For his part, the current NASA Administrator, Charles Bolden, noted the importance of this agreement in terms of continuing the space agency’s efforts to enable future crew-rated spacecraft capabilities at the center.

“Our journey to Mars goes straight through Florida, and this agreement helps amplify the many ways that our critical Kennedy Space Center can support the next generation of human spaceflight,” Bolden said.

In a statement released on June 15, Florida Governor Rick Scott said, “This is a historic event for our state. With this agreement, Florida will gain access to both unrestricted airspace and one of the longest runways in the world, which will provide the Space Coast with a competitive advantage.”