Fly with an astronaut at the Kennedy Space Center Visitor Complex 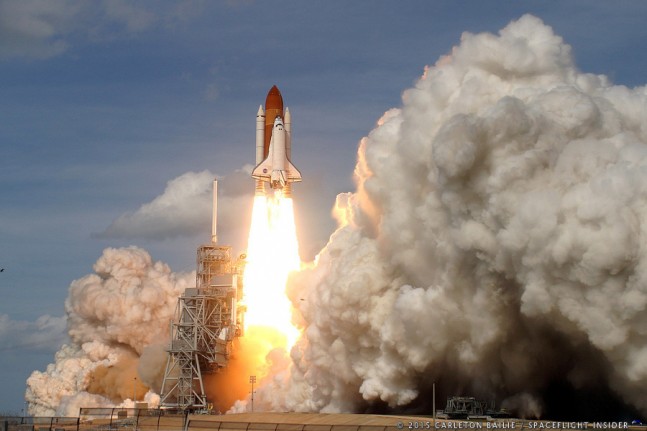 If you've ever wanted to fly with an astronaut - the Kennedy Space Center Visitor Complex is giving you a chance. Photo Credit: Carleton Bailie / SpaceFlight Insider

KENNEDY SPACE CENTER, Fla — We have all wondered what it would be like to strap into a rocket bound for the deep black of orbit with the rocket jockeys who lived the dream during the Space Shuttle Program. Wonder no more. The Kennedy Space Center Visitor Complex is now giving you the opportunity to strap into the Shuttle Launch Experience with two-time shuttle veteran Robert C. Springer from July 16-19.

“It is one thing to experience the Shuttle Launch Experience Simulation, but to do it with an experienced astronaut as your host – makes it an ‘out of this world experience’,” Springer told SpaceFlight Insider. With Springer serving as the guests’ guide, some 43 visitors each day will be given a “pre-flight briefing” before posing for crew photos with the Mission Specialist who flew on shuttles Discovery (STS-29) and Atlantis (STS-38).

Guests will then be provided with a drive past the massive Vehicle Assembly Building (VAB) along with the LC-39 Observation Gantry where they’ll have the opportunity to snap images of the historic launch sites at KSC and the adjacent Cape Canaveral Air Force Station.

From there, these guests will visit the Apollo/Saturn V center where Springer will provide a guided tour, followed by lunch and the opportunity to have their picture taken with Springer – who will then autograph the photo.

The tour will conclude at 1:30 p.m. EDT (17:30 GMT) where these new space ‘experts’ will be given a gift before being allowed to either continue touring the Saturn V Center or take a bus back to the Visitor Complex.