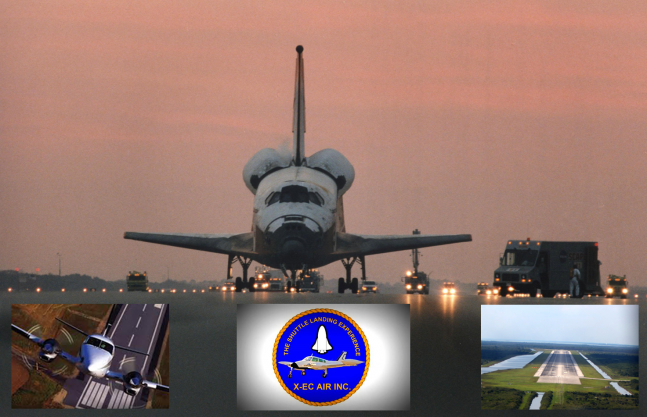 TITUSVILLE, Fla – Ever wish you could be an astronaut? The Shuttle Landing Experience ® along with The SpaceFlight Group want to provide you with your opportunity and in so doing – the experience of a lifetime. Two lucky winners will get to see what few, most of them elite astronauts have seen before – NASA’s Shuttle Landing Facility (SLF) at Kennedy Space Center in Florida – from the air. All these folks have to do is help spread the word about all the awesome which is about to take place.

The two groups want to expand their presence on Facebook and will offer up certificates to two contestants on January 23. The first will be given to the established Facebook follower who gets the largest amount of people to “like” the duo’s Facebook pages. The second winner will be one of the new followers who will be selected at random. To determine which person brought in the most amount of new fans – they need to have these new folks contact us and let us know whom they are liking the two groups on behalf of. At the end of the month-long contest the number will be tallied and the first of our two winners announced.

These certificates will grant them access to The Shuttle Landing Experience’s “Level 2” experience. They will soar high above the iconic landmarks of the Kennedy Space Center and then plunge down to the SLF before returning to The Shuttle Landing Experience’s base at Arthur Dunn AirPark in Titusville. The certificates are good for the flight, but the winners will have to arrange to get to Florida’s Space Coast on their own.

“The last of the shuttle missions, STS-135, wrapped up back in 2011, we really missed the excitement that the program brought and have opted to recreate what the space shuttle did – if only in a very small way,” said John Godfrey the owner and operate of The Shuttle Landing Experience. “We need folks to know we’re here and the best way we felt to do that was to host a contest. This way, we not only get increased exposure – but we get to show what it is that we do to folks who might not otherwise have the opportunity.”

Normally the flights above the SLF run $59 per person. Godfrey is currently putting the finishing touches on the Level 2 and working on his most ambitious project to date – Level 3. Level 3 will be as similar to the “angle of attack” that the orbiters took as possible and will certainly be a magnet for space enthusiasts and adventure-seekers alike.

The preceding is a paid advertisement for The Shuttle Landing Experience.

My husband would absolutely die for this.

C’mon Leonidas and Tom, you know that you would walk barefoot across ten miles of broken glass for this, and I’d be right next to you )!! 🙂

I posted information about this contest and SpaceFlight Insider on the Facebook page of the Michigan Science Center. I didn’t post it because I thought it might increase my chances to win the contest, if anything it would decrease my chances against individuals who have eleventyseventyninefour brothers, sisters, cousins, nieces, nephews and other assorted “kin-folk” of varying degrees of co-sanguine connection who are possessed of intellectual prowess sufficient to press the “like” button. I posted the information because these are the budgetary “times that try mens souls”. “Out of sight (or sound), out of mind.” If there ever was a time not to sit quietly on the sidelines while others vociferously plead the case why their pet project to broadcast Sesame Street to the young tykes in Afghanistan is more important than NASA’s program of space exploration, it is NOW!! We must . . . WE MUST take every opportunity to keep what NASA has done, is doing now, and what it can do under everyone’s nose. If we do not use every resource to make the case for space exploration, who will? SpaceFlight Insider is a resource of inestimable value – USE IT!! Do you really want the dedicated, best-and-brightest geniuses of NASA to have to go before Congress like Oliver Twist, empty bowl outstretched, only to hear, “More! You want MORE?! The highly intelligent individuals who are attracted to this site know the value of, no . . . the absolute necessity of a well-funded NASA with goals that set the fires of the imagination burning. It is up to us to keep making the case wherever, whenever possible.

This is so exciting! I am going to promote this in my Face Book group, Titusville, Fl News Rants and Raves! See you for my husband’s BD in February:-)