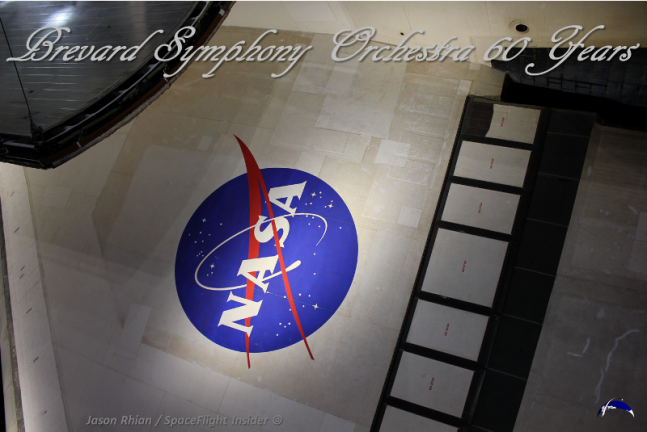 While on orbit, space shuttle crews would be awoken by music, sometimes selected by themselves, sometimes selected by family members. For thirty years, crews rode the shuttles, Atlantis, Challenger, Columbia, Discovery and Endeavour on pillars of flame into the heavens. Now? The historic spacecraft sit in museums or amusement parks – but they are not forgotten. On Saturday, March 22 the Brevard Symphony Orchestra (BSO) played a concert for Atlantis in honor of the orchestra’s 60th anniversary entitled: Symphonic Odyssey.

Atlantis currently resides at the Kennedy Space Center Visitor Complex, resting inside a $100 million facility that highlights her missions, her payloads and the crews who were ferried aloft on board the iconic orbiter. Playing scores from science-fiction films such as 2001: A Space Odyssey, The Last Starfighter, Star Wars and Star Trek the BSO highlighted the diverse array of music they perform on a regular basis. “What a wonderful, wonderful evening this is,” said former space shuttle pilot and retired U.S. Navy Captain Jon McBride. “What a tremendous venue this is, underneath space shuttle Atlantis and we’re getting ready to listen to the Brevard Symphony Orchestra perform – I can’t think of anything more spectacular that that!

BSO’s Musical Director and Principal Conductor Christopher Confessore was asked what the evening’s events meant to him.

“Well obviously for us, this is being the orchestra for this region of the state it’s very meaningful to be here, so many supporters of the orchestra over the years, so many sponsors of the orchestra over the years have been affiliated with the space program in some way. In the past we’ve preformed concerts at the Saturn V building underneath the Apollo rocket, that was a cool experience. This facility is so beautiful and to me the important role that music plays in the presentation upstairs, the emotional impact that so many visitors have I think is really triggered by, I mean seeing this beautiful vessel speaks for itself but the music is a part of that. So we were very excited to have the opportunity to preform in here, it’s always, we won’t know until we start playing, we didn’t rehearse in here so we won’t know what the acoustics are like we assume it’s going to be a very live building. I’m sure the shuttle engineers took acoustics into account on those tiles!,” Confessore said laughing.

While the 90,000 square foot halls that house Atlantis were ringing with the sounds provided by the 60 members in the orchestra, one particular performer not only demonstrated his musical talents – he also regaled those in attendance with his memories of riding fire.

“When I talked to folks tonight, I spoke to them not only of my experiences traveling to space, but also my deep love of music,” said Winston Scott, the current dean of the College of Aeronautics at Florida Institute of Technology – and a two time space shuttle veteran. “It’s an incredible honor to be asked to perform with them.”